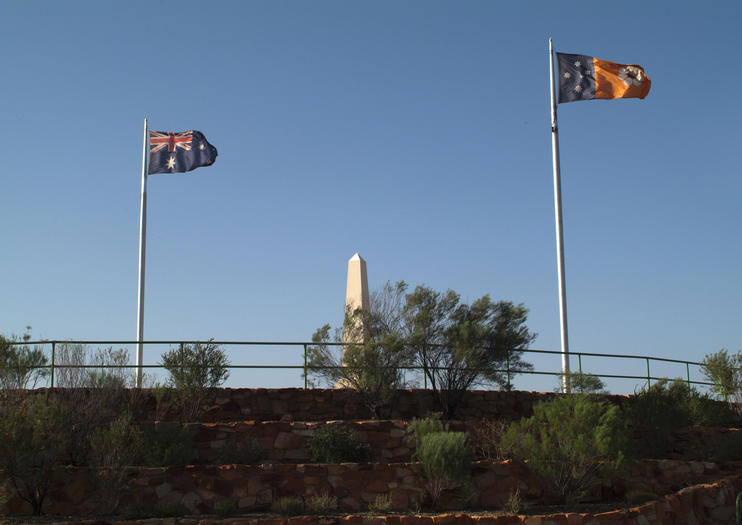 Offering sweeping views over Alice Springs and the MacDonnell Ranges, Anzac Hill is named for its war memorial commemorating World War I ANZAC (Australia and New Zealand Army Corps) soldiers. Known to Aboriginal people as Untyeyetweleye or Atnelkentyarliweke, the hill plays a role in the Caterpillar Dreaming and Corkwood Dreaming stories.

The Basics
There’s no charge to embark on the steep hike or easy drive up Anzac Hill to soak in the views and pay your respects at the cenotaph, and many travelers choose to visit independently. Alternatively, book an Alice Springs tour to combine Anzac Hill with other signature city sights such as the Royal Flying Doctor Service and the Alice Springs Desert Park, or visit as part of a broader Red Centre journey, alongside central Australian icons such as Ayers Rock (Uluru).

How to Get There
Anzac Hill stands in downtown Alice Springs, about a 0.5-mile (800-meter) walk from the visitor information center; if you’re hiking, take Lion’s Walk from Wills Terrace. Buses 400 and 401 run infrequently down Larapinta Drive and only during daylight hours, so travelers without their own vehicle may well want to join an organized tour.

When to Get There
Anzac Hill is open 24 hours a day, seven days a week, but is rarely crowded. On ANZAC Day (April 25), the memorial hosts both the traditional dawn service and a midmorning service with a parade. The views across Alice Springs and the ranges are particularly special at sunset, which also enables you to avoid the heat of the day.

What Does ANZAC Mean?
From Anzac biscuits to ANZAC Day to Anzac Hill, the term ANZAC is common in Australia. The Australia and New Zealand Army Corps, an army unit composed of Australian and New Zealand soldiers, fought bravely in the First World War during the Battle of Gallipoli, a long and fruitless struggle for a strategic Turkish peninsula. ANZAC Day commemorates their arrival at Gallipoli on April 25, 1915.
Address: Anzac Hill Road, Alice Springs, NT 0870, Australia
Read MoreShow Less

80
Discover the legendary heart of Outback culture on this half-day highlights tour of Alice Springs. Visit the historic Overland Telegraph Station and learn how residents have adapted to ultra-remote living at the Royal Flying Doctor Service base and the School of the Air. Encounter fearsome desert creatures at the Alice Springs Reptile Park, and take in sweeping views of the West MacDonnell Ranges from the top of Anzac Hill.
…More
From
US$92.13
From
US$92.13
Hand sanitizer available to travelers and staff
Regularly sanitized high-traffic areas
Gear/equipment sanitized between use
Learn More
Taking safety measures

View spectacular outback scenery and take photos as we travel along through magnificent Outback Country, stopping at the many historic locations. As we depart town we will stop at the historical Flynn’s Grave Memorial. Enjoy beautiful walks at both Simpsons Gap and Standley Chasm. In the afternoon, tour the sights of 'The Alice' including The School of the Air, the historic Telegraph Station, and the Royal Flying Doctors Service, as well as the Alice Springs Reptile Centre. The tour concludes with a panoramic view of Alice Springs and the MacDonnell Ranges from Anzac Hill.
…More
From
US$142.08
From
US$142.08
Hand sanitizer available to travelers and staff
Regularly sanitized high-traffic areas
Gear/equipment sanitized between use
Learn More
Taking safety measures

Things to do near Alice Springs