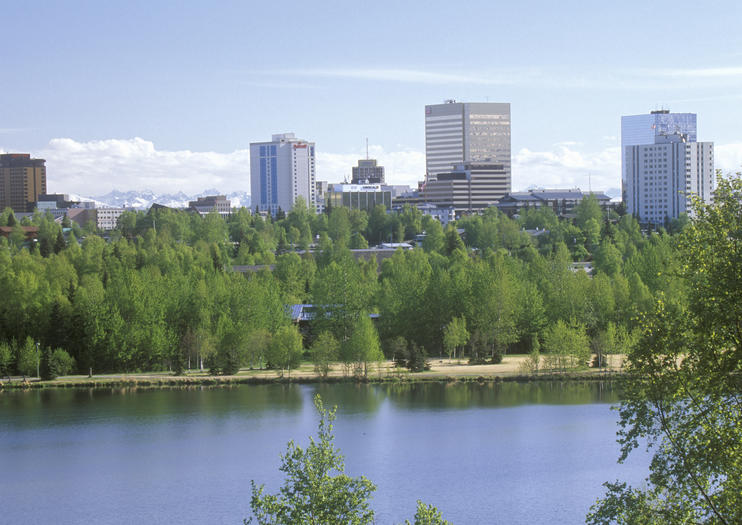 Enjoy a free air show with your picnic lunch at Lake Spenard. Connected by a canal in the 1970s, Lake Hood and Lake Spenard serve as the runway of one of the world’s busiest seaplane bases. Daily, nearly 200 planes use the base to shuttle goods and passengers to and from the Alaskan interior.

The Basics
The highlight of a trip to Lake Spenard is watching the seaplanes take off from and land at the Lake Hood Seaplane Base. Some sightseeing tours of Anchorage include a visit to the base. Or, relax at Spenard Beach Park, followed by a walk or bike ride on one of the lakeside paths.

How to Get There
Lake Spenard is the eastern half of the Lake Hood Seaplane Base, which is located 4 miles (6.5 kilometers) southwest of downtown Anchorage, near the Ted Stevens Anchorage International Airport. To combine a visit to the base with other Anchorage sights, a guided trolley tour is a convenient option. Otherwise, the airport bus (bus 40) provides easy access to Lake Spenard.

When to Get There
Lake Hood Seaplane Base is open year-round. The runway is busiest during summer, and planes take off and land throughout the day. Less active in winter, the frozen runway is maintained for ski-planes.

The Legend of Larry, Curly, and Moe
During the 1990s, seabirds kept interfering with flight operations at the Lake Hood Seaplane Base. After several attempts to control the birds failed, airport staff released three farm pigs—named Larry, Curly, and Moe—on the island that separates the runway lanes. Larry, Curly, and Moe’s mission: destroy the seabirds’ nests and eat as many of their eggs as possible. The solution worked for a while, then the displaced birds built their nests elsewhere around the airport.
Address: Lakeshore Drive, Anchorage, Alaska 99517, USA
Read MoreShow Less

1576
Take a comfy seat aboard a cable car for this 1-hour Anchorage tour by trolley. As you roll along in the city, delight in sights like moose (safely) crossing the road and seaplanes descending on Lake Hood and Lake Spenard. Gain unique into the local history and culture of Alaska's most populous city from guides with generational ties to the region. Trolleys run regularly and your wallet-friendly outing comes with a complimentary coupon booklet with some $200 in travel savings.
…More
From
US$20.52
From
US$20.52
Face masks required for guides in public areas
Hand sanitizer available to travelers and staff
Social distancing enforced throughout experience
Learn More
Taking safety measures

Things to do near Anchorage