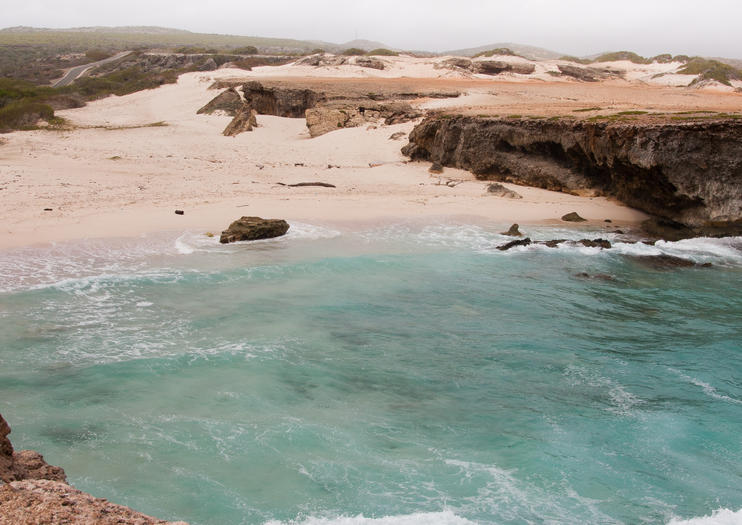 With deserted beaches and rocky coves, dusty plains dotted with cacti, and ancient limestone caves, Arikok National Park feels worlds away from the luxurious resorts of Aruba’s north coast. Covering almost 20 percent of the island, the park, one of the best reasons to venture south, offers a spectacular backdrop for outdoor adventures.
The Basics
The most popular way to explore Arikok National Park is on an ATV or UTV excursion. A half-day tour is enough to take in the highlights, including the Aruba Natural Pool, and active types can choose from a variety of different hiking trails, swim or snorkel along the coast, or tour the bushlands on horseback. Alternatively, visit Arikok as part of an Aruba sightseeing tour and zip around the island in an open-air jeep, stopping at sights like Arashi Beach, Baby Beach, Alto Vista Chapel, and California Lighthouse.
Things to Know Before You Go
How to Get There
Arikok National Park is located along the southeast coast of Aruba and is only accessible by 4WD. Most visitors visit with a guided tour or hire their own transport.
When to Get There
You can visit Arikok National Park year round, but popular attractions can get crowded during peak season (January to March). The park’s typical opening hours are 8am to 4pm, and it’s best to get an early start to avoid both the crowds and the midday heat.
Things to do in Arikok National Park
In addition to the Aruba Natural Pool, the park’s top attraction, other highlights include Arikok and Jamanota hilltop, which offer incredible views of the island and Caribbean Sea; the sandy beaches of Dos Playa and Boca Prins, which are famous for the sea turtles that nest onshore; and Quadirikiri and Fontein caves, which are known for their Arawak tribe rock art.
Address: Santa Cruz, Aruba
Admission: Varies
Read MoreShow Less

7
Explore Arikok National Park with a park ranger on this hiking tour. Depart from your hotel with a driver-guide and make your way to the park. As you hike, observe the dramatic landscapes. Learn about the local animal and plant life from your guide, including the Aruban burrowing owl, the Aruban whiptail lizard, the Aruban parakeet, and more.
...  More
From
US$47.00
From
US$47.00
Learn More

834
Take off in a caravan of open-air 4WD vehicles over bumpy terrain to Aruba’s east coast, where the Natural Pool sits pretty in Arikok National Park. Enjoy time to swim and snorkel around the volcanic rock and coral, plus stop at other island attractions like Fuente Bridge and Indian Caves. This half-day tour departs in the morning or afternoon. Cold beverages and round-trip hotel transport are included.
...  More
From
US$81.62
From
US$81.62
Learn More

88
Drive around Aruba aboard an open-air converted school bus decked out in tropical-themed Caribbean colors. You’ll see island highlights narrated by an informative guide while you sip rim punch between stops. Visit the California Lighthouse, the Natural Bridge and Guadirikiri Caves in Arikok National Park. Swim in the calm waters of Baby Beach and feast on a restaurant barbecue lunch during your 6.5-hour tour, including round-trip hotel transport.
...  More
From
US$57.75
US$77.00
US$19.25 savings
From
US$57.75
US$77.00
US$19.25 savings
Learn More

310
Ride an ATV through the backcountry on Aruba's North Coast during this adventure. Meet your local adventure guides and take off to see sights like the Alto Vista Chapel, the Baby Bridge, Arikok National Park and the Bushiribana Gold Mine Ruins. Swim in the gorgeous Natural Pool and enjoy engaging, informative commentary during your tour. Use of safety gear and round-trip transportation from Aruba hotels are included.
...  More
From
US$76.93
Price varies by group size
From
US$76.93
Price varies by group size
Learn More

89
Experience the wildlife of Aruba through an exciting UTV adventure. This extreme tour is both an adventurous and exhilarating ride through the island's rugged desert and coastline. It is the best way to explore Aruba; a 4-hour ride led by an expert tour guide who will take you to: 1. Philip's Animal Garden (the island's largest exotic animal sanctuary), 2. Alto Vista Chapel, 3. Baby Bridge, 4. Bushiribana Ruins, 5. Natural Bridge, 6. Arikok National Park, 7. Shark Bay, 8. Andicuri Beach, 9. Three Bridges, 10. Black Stone Beach, 11. Conchi Natural Pool, 12. Ayo Rock Formation. Experience the thrill of driving your own 4x4 UTV while exploring Aruba's rocky coastline. The driver should be at least 18 years old with a valid driving license while the minimum age for the passengers is set at 6 years. Tours include complimentary non-alcoholic beverages, free entrance to Arikok National Park. Free pickup and drop-off from and to your accommodation.
...  More
From
US$115.39
Price varies by group size
From
US$115.39
Price varies by group size
Learn More

59
Explore the north side of the island which is also the volcanic side on our 4x4 Jeep Wrangler Safari and go on an adventure of a lifetime. This is the only Jeep tour that will take you to two beautiful natural pools in one tour, The Natural Pool Cave with Cliff Jumping & The Natural Pool in The Arikok National Park also known as Conchi. Enjoy this excursion with our professional and jolly tour guides visiting also beautiful landmarks like California Lighthouse, Altovista Chapel, Bushiribana Goldmill Ruins & Wariruri Natural Bridge.
...  More
From
US$91.80
From
US$91.80
Learn More

86
Ride a UTV through Aruba's rugged landscape during this adventure. Meet your local adventure guides and take off to see sights like the Wish Rock Garden, the Baby Bridge, Black Stone Beach, the California Lighthouse and the Bushiribana Gold Mine Ruins. Enjoy engaging, informative commentary during your tour and make a beach stop for a refreshing swim. Use of safety gear and round-trip transportation from Aruba hotels are included.
...  More
From
US$215.39
per group
From
US$215.39
per group
Learn More

653
Explore independently with your own UTV on this guided tour. Depart from your hotel on a round-trip transfer and take suggestions for your guide and head out to areas for swimming and snorkeling in the clear water. Try cliff jumping at Conchi Natural Pool and refresh yourself with drinks of cold water.
...  More
From
US$231.08
per group
From
US$231.08
per group
Learn More

23
The Aruba ATV tour starts with Aruba Island’s largest wildlife sanctuary, Philip’s Animal Garden is covering Arikok National Park and Conchi Natural Pool before concluding the trip at their starting location. Step outside your comfort zone with this mind-blowing, adventurous, fascinating, and great ATV escapade! Ever felt an adrenaline rush so high you thought you could fly? Wind blowing in your face, while having the feeling that everything and anything is possible? See the island's treasures from another perspective. Dive into nature with speed and explore the unseen touristic wonders this island has. No other tour will provide you with a more in-depth and unique journey, as our ATV tours are designed for those willing to go the extra mile. Our exciting ATV off-road experience will surely make your stay in Aruba worthwhile. We promise that the experience will leave you with anecdotes to carry for a lifetime. We know no rush. We take our time to please your every need.
...  More
From
US$102.57
Price varies by group size
From
US$102.57
Price varies by group size
Learn More

55
Explore the rural, wild side of Aruba and drive a UTV on this guided tour. Depart from your hotel or cruise ship and receive a safety briefing on your UTV from your guide. Go off-road and enjoy the wild landscapes of Arikok National Park. Continue to Fontein Cave, where you can see ancient cave drawings. Ride on the sand dunes at Boca Prins and visit the tucked-away Natural Pool.
...  More
From
US$185.00
per group
From
US$185.00
per group
Learn More

107
Explore Aruba’s rugged terrain on your on UTV on this guided half-day tour. Depart from your hotel or port and receive all the necessary equipment. See parts of the island that are hard to access, including less-visited corners of Arikok National Park and the Natural Pool. Learn about the island from your guide and enjoy snacks throughout the tour.
...  More
From
US$200.00
per group
From
US$200.00
per group
Learn More

5
Watch Aruba's sunset while riding horseback atop the hills of Arikok National Park on the island's east coast. Guides at Rancho Loco match you with a horse ideal for your skill level--novice to expert riders are welcome to enjoy the sweeping land and ocean views on this excursion. Round-trip transportation from your hotel or cruise-ship port is included.
...  More
From
US$88.17
From
US$88.17
Learn More

24
Go off-roading in Aruba to explore the Caribbean island’s natural landmarks best accessed by 4WD, with the option to add on a snorkeling cruise by catamaran. Get behind the wheel of a Kia Sportage or let your guide steer the way aboard a Jeep Wrangler. Highlights include the Natural Bridge, Boca Mahos cove, Arikok National Park and Baby Beach. Enjoy grilled seafood or chicken for lunch at a waterfront restaurant. Round-trip hotel transport is also included in the half-day or full-day option.
...  More
From
US$78.75
US$105.00
US$26.25 savings
From
US$78.75
US$105.00
US$26.25 savings
Learn More

531
Explore Aruba in the back of a 4-wheel drive open-air jeep. On this full-day excursion, learn about the island's most interesting landmarks from your local guide on your way to the famous Baby Beach. See the Seroe Colorado Natural Bridge during your stop at Arikok National Park, and finish up your adventure with some relaxing lounge time on the white sands at Baby Beach. Round-trip transportation from Aruba hotels is included.
...  More
From
US$89.00
From
US$89.00
Learn More