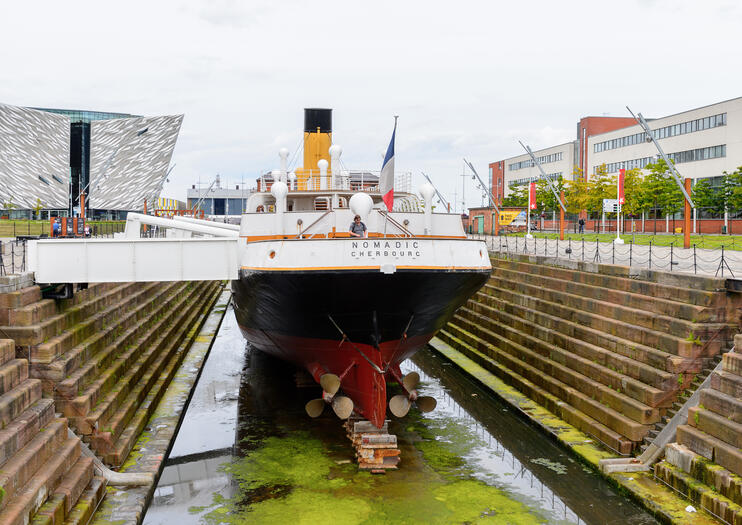 Now permanently berthed at Belfast’s Hamilton dry dock, the SS Nomadic is the last surviving vessel from the White Star Line, the once-prominent shipping line behind the ill-fated RMS Titanic. Built in the Harland and Wolff shipyards, the SS Nomadic was the tender to the Titanic, ferrying passengers to the luxury cruise liner.
The Basics
The SS Nomadic now functions as a museum, with exhibits spread across four decks. Visitors can learn about its construction and its role in the Titanic story, as well as admire restored interiors and find out about its wartime service and stint as a Parisian restaurant-nightclub. Self-guided and guided tours are available. Tickets for the neighboring Titanic Belfast Experience include free admission to the SS Nomadic. Buy tickets in advance to skip the line.
Things to Know Before You Go
How to Get There
The SS Nomadic sits in Hamilton dry dock, right beside Titanic Belfast, in Belfast’s Titanic Quarter. Walk here from Belfast city center in about 20 minutes, or take the train to the Titanic Quarter station, which is 10–15-minutes’ walk away. Several Metro bus routes, including the 26, 26a, and 26c stop nearby.
When to Get There
The SS Nomadic is usually busiest between June and August, especially on weekend afternoons. If you want to avoid the biggest crowds, come midweek during spring or autumn when the Titanic Quarter sees less foot traffic.
History of the SS Nomadic
The SS Nomadic stayed afloat for decades after the sinking of the Titanic. The ship continued to work as a tender for White Star’s luxury cruisers, and was used in both world wars before finally ending up as a floating party boat on the River Seine in Paris. Having been purchased by the Northern Irish government in 2002, the SS Nomadic was restored and retired to the dry dock in Belfast where it now stands.
Address: Hamilton Dock, Queens Road, Belfast, County Antrim, Northern Ireland BT3 9DT, Northern Ireland
Admission: Varies
Read MoreShow Less
Admission Tickets (1)

1089
Delve into the fascinating history of the Titanic at Titanic Belfast, the world’s largest Titanic exhibition, on a self-guided tour of the magnificent museum. Explore the institution at your own pace in order to discover insightful exhibits detailing the construction, voyage, and legacy of the infamous ship. Enjoy interactive displays; watch audiovisual presentations; and feel your adrenaline levels surge during an exhilarating Shipyard Ride. Receive complimentary entry to the SS Nomadic with your Titanic Belfast ticket.
...  More
From
US$25.35
From
US$25.35
Check Availability
Check Availability

Recent Reviews from Experiences in Belfast

The Kilkenny Cats visit The Titanic Experience
Deirdre_G
, Aug. 2020
We had a fantastic experience, your staff were helpful and friendly, the exhibits were very well sequenced and displays were visually beautiful and easy to follow . The history of the Titanics construction and eventual demise was so poignant, seeing the cabin furnishings and the tiered hierarchical system showed us that steerage in the titanic wasn’t as uncomfortable as previous ships but class distinction was very much apparent, The ships staff point of view was well detailed and a interesting slant on their option of events, the cinema and glass viewing area were fantastic
... MoreLess
Titanic WoW!
Dermot_H
, Aug. 2020
Excellent experience would highly recommend the staff are so helpful and knowledgeable. We visited with 2 teens and they thoroughly enjoyed it.
... MoreLess
A Titanic Experience
Joan_S
, Mar. 2020
Went on a Friday morning, not too many people there so it was easy to get around, to see everything and to read about it all. Wonderful exhibition, very well presented. It includes video and audio clips and many interactive features. School group ahead seemed well looked after and also very interested in it all.
... MoreLess

1089
Delve into the fascinating history of the Titanic at Titanic Belfast, the world’s largest Titanic exhibition, on a self-guided tour of the magnificent museum. Explore the institution at your own pace in order to discover insightful exhibits detailing the construction, voyage, and legacy of the infamous ship. Enjoy interactive displays; watch audiovisual presentations; and feel your adrenaline levels surge during an exhilarating Shipyard Ride. Receive complimentary entry to the SS Nomadic with your Titanic Belfast ticket.
...  More
From
US$25.35
From
US$25.35
Learn More

2
Combine two popular tours in Belfast into one ticket with this flexible package. Explore the HMS Caroline, a navy cruiser from World War I, including the ship’s decks and the Captain’s Cabin. The combination ticket also includes a pass on the hop-on, hop-off bus that is valid for 48 hours. Cover ground in Belfast quickly with this pass that offers 23 stops throughout the city.
...  More
From
US$26.68
From
US$26.68
Learn More

3
Explore more of Belfast’s top attractions—including the Peace Wall, St Peter’s Cathedral, and more—than you could on foot during this private tour, ideal for first-time visitors. Adapt the itinerary to suit you, enjoy the sights as you’re driven from point to point, and get to grips with Belfast’s complex history, as your private guide provides context on each location.
...  More
From
US$126.65
Price varies by group size
From
US$126.65
Price varies by group size
Learn More

14
'Game of Thrones' fans will love this combo package that includes a full-day tour by open-top bus around Belfast filming locations. Then continue your sightseeing with a 48-hour hop-on hop-on pass that lets you discover highlights of the city. Courtesy hotel pickup is available upon request.
...  More
From
US$66.70
From
US$66.70
Learn More

59
Combine two great-value tours around Belfast: a full-day trip to the UNESCO-listed Giant's Causeway and a 48-hour pass for a hop-on hop-off bus tour of the city. Get a comprehensive look at the natural wonder on the Antrim Coast, then go sightseeing on your own in Belfast.
...  More
From
US$60.03
From
US$60.03
Learn More

Things to do near Belfast