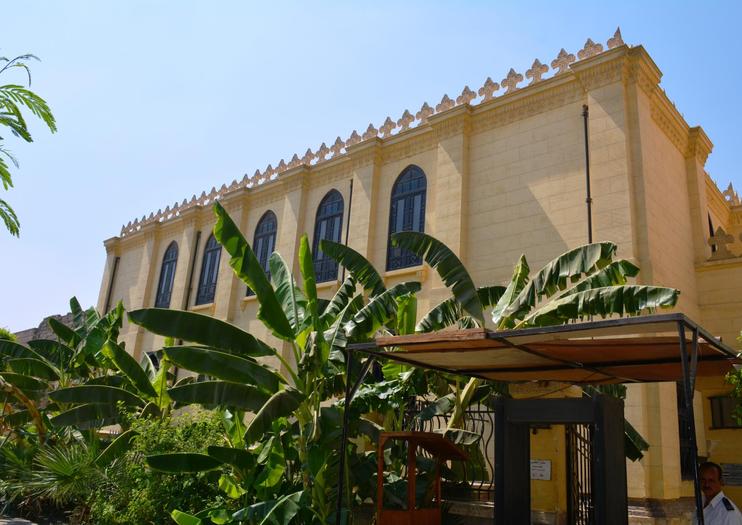 Ben Ezra Synagogue used to be a Christian place of worship by the name of El-Shamieen Church and according to a legend, the building was built on the exact spot where Moses was found as a baby in his basket. However, when the Coptic Christians owning it weren’t able to pay the annual taxes imposed by the Muslim rulers any longer, they had to sell the church. It was sold to Abraham Ben Ezra, who purchased the building in 882 AD for 20,000 dinars and turned it into a Jewish synagogue.
The synagogue became a place where North African Jews congregated for major festivals and famous rabbis came to worship on their visits to Cairo. Then, during a restoration in 1890, the most famous and diverse Geniza in the world was found. In an empty space below the roof, roughly 300,000 priceless manuscripts were hidden away, a collection that is now known as the Cairo Geniza. The manuscripts have long since been transferred to different libraries, but visitors to the synagogue will still be able to visit this place of historical importance and learn about Coptic and Jewish Cairo. In fact, the Ben Ezra Synagogue is the most visited Jewish site in the city and surprises visitors with the beautiful geometric and floral patterns in the Turkish style.

65
Discover the historical treasures of the Coptic Christian community on this 3-hour private tour of Coptic Cairo. Travel into this captivating neighborhood, also known as Old Cairo, with your private guide, and visit a medley of early, icon-adorned churches, including the Hanging Church and Abu Serga, where the holy family is said to have found refuge. Learn about Egypt’s rich Coptic heritage, and visit the Coptic Museum, a treasure trove of ancient artifacts that tell the story of this Christian community, one of the world’s oldest.
...  More
From
US$52.25
Price varies by group size
From
US$52.25
Price varies by group size
Learn More

Experience Egypt’s ancient history and Jewish heritage with a private, full-day tour of Giza and Cairo. Use the flexibility of a private tour to see the sites that interest you most, and explore the iconic pyramids of the Giza Plateau, the Great Sphinx and the funerary complex at the Valley Temple. Take in the mummies and treasures of the Egyptian Museum, then enter Cairo's Old City to visit a Roman-era fortress and Ben Ezra Synagogue, built on the legendary site where baby Moses was discovered.
...  More
From
US$54.00
From
US$54.00
Learn More

1
Enjoy a half-day exploring some of Coptic Cairo's top sites on this remarkable private tour. Follow an expert Egyptologist through ancient ruins, historic landmarks and top attractions. Learn about history and Coptic Christian culture as you wind through the streets and alleys of Old Cairo. You'll visit Abu Serga, where the holy family sought refuge, as well as the Hanging Church, Ben Ezra Synagogue, Santa Barbara and more.
...  More
From
US$57.59
From
US$57.59
Learn More

23
Explore Cairo’s dynamic Christian and Islamic history on a walking day tour of the old city. The outing is divided into two segments. First you’ll visit Christian Coptic Cairo—among the most important locations for Christians in Egypt—and visit a church and a synagogue. After a lunch break at a local restaurant, continue on to learn about Islamic Cairo, where you’ll have the opportunity to enter two mosques.
...  More
From
US$36.73
From
US$36.73
Learn More

31
Visit Cairo’s religious landmarks on a private tour to the city’s most important Coptic, Islamic, and Jewish places. Learn how the Christian Holy Family took shelter on the site of Saints Sergius and Bacchus Church, explore the Church of Saint Barbara, and see the gilded icons that adorn the Hanging Church. Enter a synagogue built where baby Moses was found and eat lunch at a local restaurant; see Cairo’s most important mosques then take in sweeping views of the city from Saladin’s 15th-century citadel.
...  More
From
US$50.00
From
US$50.00
Learn More

8
Visit four of Cairo’s star attractions and explore Old Cairo on this full-day tour, including lunch, with an Egyptologist guide. Visit the Egyptian Museum to see Tutankhamun’s funerary mask and more; and view the Mosque of Mohamed Ali, otherwise called the Alabaster Mosque. Delve into the ancient lanes of Old Cairo to see the famous Hanging Church, other Coptic churches and the Synagogue of Ben Ezra. Finish at the Khan el-Khalili bazaar, Cairo’s old souk, with free time to explore the narrow alleyways and shop for handicrafts, jewelry and trinkets.
...  More
From
US$99.99
Price varies by group size
From
US$99.99
Price varies by group size
Learn More

Pick up for a tour of an Islamic, Christian & Jewish sights, first you will visit the Citadel of Salah El Din, Mohamed Ali Mosque, then head to Amr Ibn El Aas Mosque, afterwards visit the Christian monuments Al Moallaqa (The Hanging Church), Abu Serga Church: dates back to the 4th century. It was built on the basilican style on top of the cave that the Holy Family used as a shelter on their trip to Egypt, escaping from King Herod, The Coptic Museum, Then to the Jewish Synagogue and conclude the tour with a visit to the Museum of Civilizations. Including lunch & bottles water.
...  More
From
US$114.29
Price varies by group size
From
US$114.29
Price varies by group size
Learn More

Half day tour to hanging church and synagogue

Coptic Cairo is one of the most enchanting, interesting parts of the city. With this guided tour, you'll get to visit two of the area's finest attractions: The Hanging Church, with its ivory screens and beautiful wooden pillars, and the Ben Ezra Synagogue, housed in what was once a church.
...  More
From
US$46.00
Price varies by group size
From
US$46.00
Price varies by group size
Learn More

16
Discover Cairo’s Coptic, Jewish and Islamic traditions on a full-day cultural tour that includes Abu Serga Church and the Citadel of Cairo. Step into the sanctuaries of the city’s most important Coptic churches, from the 4th-century Abu Serga to the elegant Hanging Church, visit a synagogue built where baby Moses was purportedly found and see celebrated mosques and madrassas. Finish your tour on the medieval fortifications of Saladin’s Citadel of Cairo, which protect the graceful domes and minarets of the Alabaster Mosque.
...  More
From
US$71.43
From
US$71.43
Learn More

2
you will visit Coptic old cairo which is one of the places visited by the Holy Family where the spiritual impact of their presence is most felt still. you will also visit the Hanging Church which is one of the most historic places.you will also visit Ben azra synagogue where baby Moses was found. you will enjoy visiting Fort of Babylon which is a destination of Pilgrimage not only for egyptians but for all Christians all over the world.you will also visit Omar Ibn El Aas mosque.it was built in 624 A.D by the islamic leader Amr Ibn El Aas at el Fustat area. also you will visit Mosque and Madrassa of Sultan Hassan.It is one of the biggest mosques which is built in 1356 A.D by el Sultan Hassan.also you will enjoy visiting Al Rifai Mosque which is One of the oldest and most architectural mosques opposite to the Mosque-Madrassa of Sultan Hassan built in 1361.also you will visit St. Mary's Coptic Orthodox Church. and you can visit Saladin Citadel ( optional with extra fees)
...  More
From
US$32.00
Price varies by group size
From
US$32.00
Price varies by group size
Learn More

Admire artifacts from Ancient Egypt in the  Egyptian Museum. Then visit  Salah El Din Citadel, constructed in 1183 AD, and Mohamed Ali Mosque, built inside the castle in the 19th century. Tour  Old Cairo, the site of a city that pre-dated Cairo with many historic churches and a Roman fort.
...  More
From
US$103.22
Price varies by group size
From
US$103.22
Price varies by group size
Learn More

Gain a deeper understanding of Cairo's religious roots and spiritual influences on this popular tour that highlights the city's Islamic and Christian heritage. Follow your private guide through mosques, churches and the Bin Ezra synagogue as you learn more about how distinctly different--and strikingly similar--faiths coexist in this great destination.
...  More
From
US$105.00
Price varies by group size
From
US$105.00
Price varies by group size
Learn More

4
Take in some of Cairo’s top sights, including the Egyptian Museum, Citadel and Old Cairo, with the aid of a private guide during this 8-hour day trip. Discover the more than 160,000 priceless artifacts at the Egyptian Museum, some dating back as far as 5,000 years. Continue your trip back through Egypt’s history at its Citadel, constructed in the 12th century to ward off invaders, and see the city’s Coptic area and Ben Ezra synagogue. Your Cairo sightseeing trip covers a private Egyptologist guide and vehicle, lunch, entrance fees and round-trip hotel transport.
...  More
From
US$76.93
From
US$76.93
Learn More

3
Plunge into the ancient history of Coptic Cairo on a private full-day tour led by a knowledgeable guide. Absorb the historical charm of Old Cairo, an atmospheric enclave home to landmarks like the Hanging Church and the Roman ruins of the Babylon Fortress. Descend to the crypt of an archaic Coptic church; feast on typical Egyptian dishes like Koshary at lunchtime; and head inside the colossal mountain, El Moqqatam, to see the holy inscriptions carved onto the stone walls. Receive undivided attention from your guide on this educational private tour.
...  More
From
US$22.88
From
US$22.88
Learn More

3
Experience the very best of ancient Egypt on a tour that follows the Nile Valley from Cairo to Abu Simbel, with stops at some of the country’s most remarkable places. Immerse yourself in Cairo’s bustling streets, cruise the Nile River between Aswan and Luxor, pause at magnificent riverside temples, then climb into the Great Pyramid at Giza. With a mix of guided tours and independent time to explore on your own, this remarkable trip is a fun, flexible introduction to the wonders of the ancient world.
...  More
From
US$898.00
From
US$898.00
Learn More

Things to do near Cairo