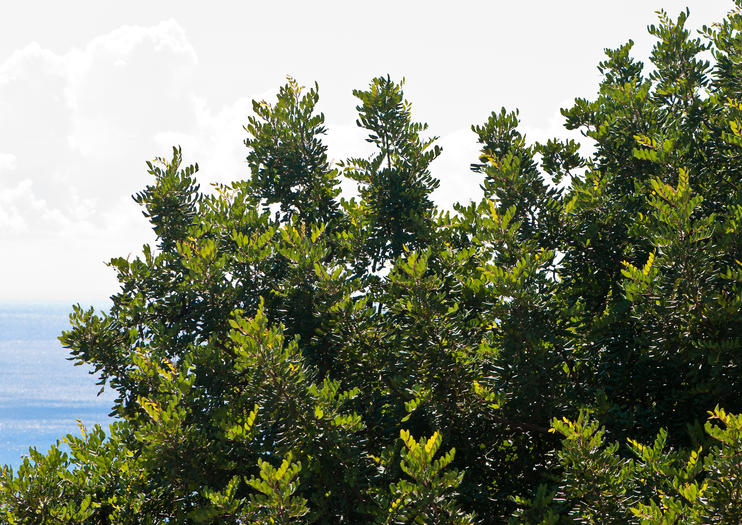 As you stand beneath the boughs of the “Millenial Tree,” with the sound of birdsong raining down from the branches, you know you've arrived in a special corner of the northern coastline of Peru. Historians say that this scraggly carob tree has been alive for over 1,000 years, making it about the same age as the ancient civilization that once inhabited this forest.
Here in the Pómac Forest Historic Sanctuary, 36 pyramids built by the ancient Sican people spread out over 23 square miles of green. Rising their heavily eroded peaks above the branches of the dryland forest, these pyramids have housed some of the greatest archaeological finds in the history of northern Peru.  Over 90% of the area’s gold, it’s said, was found at the forest’s huacas (temples), and at places such as the Huaca Las Ventanas, you can actually climb to the top of a pyramid that was constructed over 1,000 years ago.
In addition to the ruins and the serenity of the forest, the Pómac Forest Historic Sanctuary is also known for its birds. Over 70 different species of birds can be sighted within the park, and this is an emerging hot spot for birdwatching enthusiasts looking to couple their trip with some culture.

The Pómac Forest Historic Sanctuary is located 19 miles from the city of Chiclayo and takes 20 minutes to reach by car. There is no admission fee, although guides can be hired from the museum and interpretive center that is open daily from 8 a.m. to 5 p.m. To properly tour all of the sites, allow at least two to three hours and be sure to bring some good bug spray.
Address: Batán Grande, Peru
Hours: 8 a.m. to 5 p.m. daily
Read MoreShow Less

The answers provided below are based on answers previously given by the tour provider to customers’ questions.
Q:
What are Pómac Forest Historic Sanctuary hours of operation?
A:
Pómac Forest Historic Sanctuary hours of operation: 8 a.m. to 5 p.m. daily. Buy tickets in advance on Viator. If you book with Viator, you can cancel at least 24 hours before the start date of your tour for a full refund.