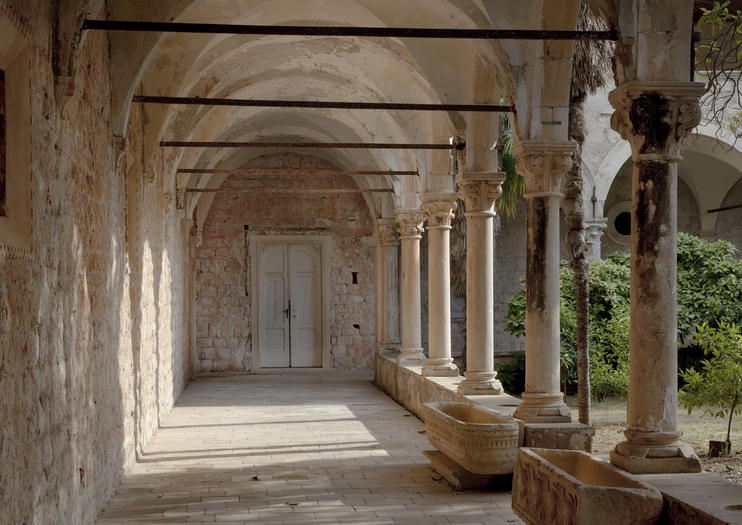 Founded in the early 11th century on the island of Lokrum 600 meters from the mainland and the city of Dubrovnik, the Benedictine Monastery came to be after monks fled the great fire that destroyed the capital in 1023, vowing to honor Saint Benedict should he protect their lives and the island that offered them shelter. They, later on, started to cultivate exotic plants and sour fruits there and continued to do so until the 19th century. Many locals like to think that the island is haunted; rumor has it that after having been forced out of their beloved monastery upon orders of the French army, the monks put a curse on anyone who would ultimately try to seek and claim it as its own. And indeed, future owners all ominously met severe misfortune and calamities, from tragic shipwrecks to bankruptcies.
The monastery was built and expanded over several centuries, which explains the presence of a variety of architectural styles. Nowadays, however, only ruins remain of the original Romanesque structure, with rubbles of the two original churches along with some frescoes and stone reliefs. The cloisters of a later-built Gothic structure still exist and give a better sense of what it must have been like to live in the monastery back in the Renaissance days. The ruins are open to visitors, and a day trip to Lokrum shouldn’t take more than a few hours as the islet is barely over a mile wide. In fact, there are no hotels on Lokrum and, therefore, it is not possible to stay overnight.

The answers provided below are based on answers previously given by the tour provider to customers’ questions.
Q:
What are Lokrum Benedictine Monastery hours of operation?
A:
Lokrum Benedictine Monastery hours of operation: Open every day until 6 PM, except during poor weather.. Buy tickets in advance on Viator. If you book with Viator, you can cancel at least 24 hours before the start date of your tour for a full refund.