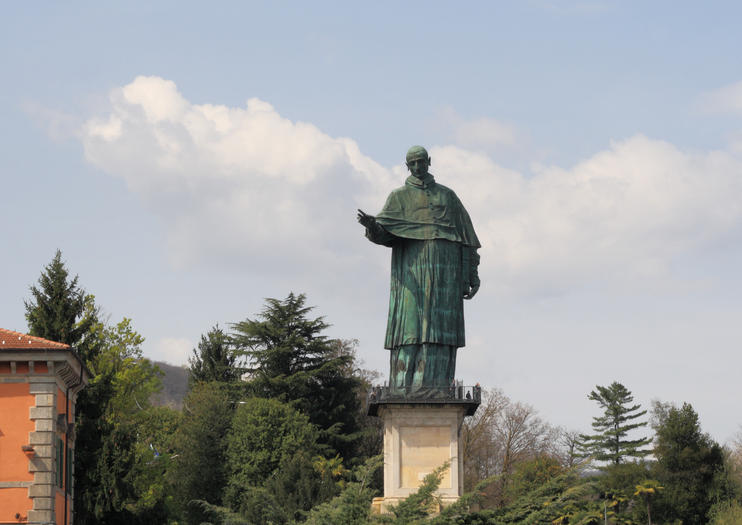 The towering bronze figure of San Carlo Borromeo near the town of Arona on Lake Maggiore is impossible to miss. Second in size only to New York’s Statue of Liberty, the hollow statue has steep stairs and ladders inside leading up to its head, where visitors can peer out over the surrounding landscape.
The Basics
Known as the Colossus or Sancarlone, meaning “big San Carlo” in Italian, the statue was built in the 17th century for the Borromeo family estate (now the Parco della Rocca Borromea) to honor Saint Charles Borromeo, the archbishop of Milan who was canonized in 1610. The statue’s granite pedestal is more than 38 feet (11.5 meters) tall, and the statue rises another 76 feet (23 meters) above that, making it one of the tallest statues in the world. This massive bronze statue, which can be seen from miles around, is one of the most popular destinations on the shores of Lake Maggiore (Lago Maggiore), and a popular stop on tours of lakeside attractions.
Things to Know Before You Go
How to Get There
The Sancarlone statue sits on the Sacro Monte di Arona, a hilltop overlooking Lake Maggiore outside the town of Arona in Italy's Piedmont region. There are regional trains that run from the cities of Novara and Milan about an hour south to Arona, but no public transportation from the station to the statue about 1.5 miles outside of town. The best way to visit is by joining a Lake Maggiore tour that includes transportation.
When to Get There
The best time to explore Lake Maggiore and its sights is from spring through fall, as many attractions close in the winter; the Colossus of San Carlo Borromeo is closed January and February.
The Colossus and the Statue of Liberty
Giovan Battista Crespi designed the Colossus, but French artist Frédéric Auguste Bartholdi studied the statue in 1869 on his way back from Egypt and used many of the same techniques when designing his Statue of Liberty over a decade later.
Address: Via alla Rocca 22, Arona, Italy
Admission: Varies
Read MoreShow Less

An art and food tour close to Arona, on lake Maggiore

Arona, a beautiful town laying on the South-Western coast of lake Maggiore, gave birth in the 16th century to the future saint and bishop of Milan Carlo Borromeo. After a few decades from his death, a huge bronze statue dedicated to the memory of the revered citizen was built close to Arona and acted as an inspiration and a technical instruction for Frédéric-Auguste Bartholdi, the designer of the Statue of Liberty in New York. This exclusive tour will lead you from the charming centre of Arona to the hill where you will be able to visit the statue and enjoy a view of the lake, definitely from its "point of view". Later on, you will be guided to a local seasoning cellar, where a full tasting of wine and local, delicious varieties of cheese will be served. A day between amazing art and taste.
...  More
From
US$396.68
Price varies by group size
From
US$396.68
Price varies by group size
Learn More

Tour of Lake Maggiore and Orta san Giulio from Arona

Discover the UNESCO–listed treasures of Lake Maggiore and Orta san Giulio in Italy on this 7-hour tour from Arona. Spin along the banks of Lake Maggiore and take in top sites of interest including the Colossus of San Carlo Borromeo and the Sacred Mount of Orta. Explore the town of Stresa at your leisure, and enjoy sightseeing cruises to Bella Island and San Giulio Island. This tour includes pickup and drop-off in central Arona or your centrally located Arona hotel.
...  More
From
US$84.20
From
US$84.20
Learn More

Things to do near Lake Maggiore