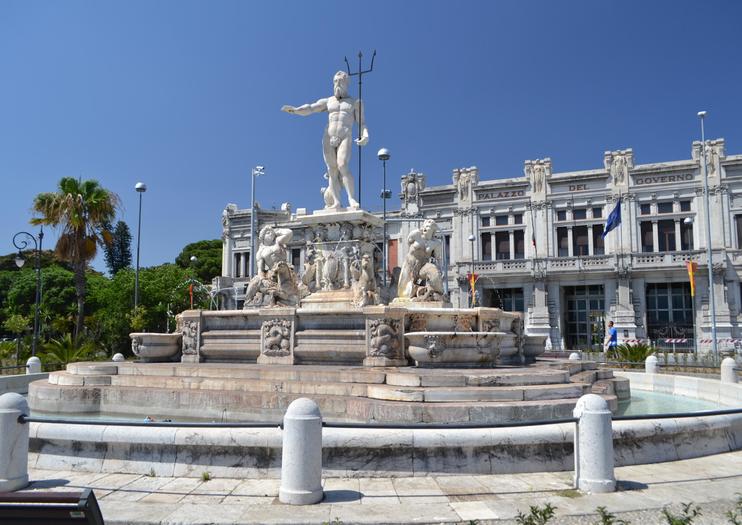 The powerful figure of Neptune appears in many fountains around Italy, including the Fountain of Neptune (Fontana di Nettuno) in Messina. The Messina version was completed in 1557 by Giovanni Angelo Montorsoli.
Montorsoli designed the Neptune figure to face the city of Messina from its original position near the harbor. The fountain was moved to its currently location in Piazza dell’Unità after it was damaged.
Neptune stands above a tiered fountain in the Messina square, holding his signature trident over the sculpted figures of two sea monsters representing two particularly treacherous rocks near Messina’s harbor. Neptune’s hand originally reached toward the city in a gesture of protection, though in the fountain’s current location his arm reaches toward the sea. Many tours of Messina’s city center include a stop at the fountain.

The Messina fountain predates the more famous Neptune fountain in Florence by seven years, and was probably an influence on the Florentine design.
Address: Via G. Garibaldi, Messina, Italy
Read MoreShow Less

56
While your ship is in Messina, see more of Sicily on a half-day trip to Taormina. Take a guided tour of this historical city, including a stroll along Corso Umberto, once an ancient Roman street, and a visit to the Greco-Roman Theater. Plus, sample Sicilian delicacies, admire views of Mt. Etna and Giardini-Naxos bay from Castelmola, and on return to Messina, check out this ancient port’s highlights. Port and Taormina pickup and drop-off included.
...  More
From
US$88.79
From
US$88.79
Learn More

Things to do near Messina