How to Spend 3 Days in Montreal 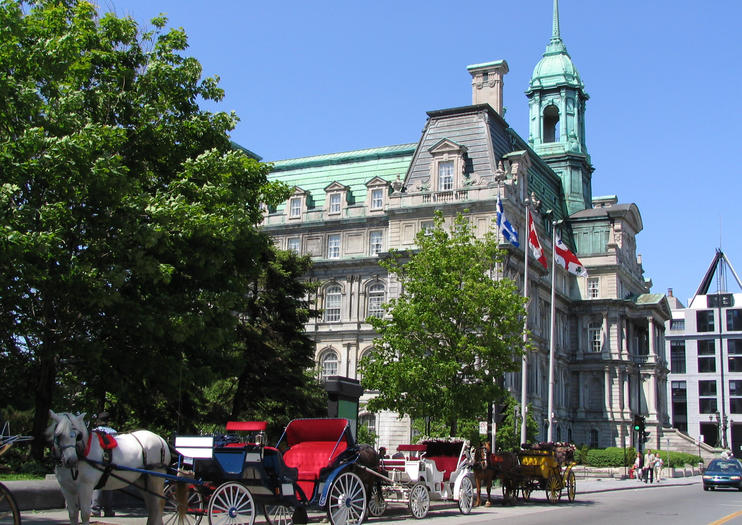 With three days in Montreal, you should have enough time to explore the city’s top-line attractions, discover interesting neighborhoods beyond the downtown core, and even take a day trip out to the picturesque Quebec countryside. Here’s how to pack sights, scenery, food, and fun into 72 memorable hours in Montreal.
Day 1: Downtown and the St. Lawrence River
Set aside your first day for Ville-Marie, the downtown area of Montreal and home to many of the city’s must-see sights, including Notre-Dame Basilica and Place Jacques-Cartier. You can travel around by hop-on hop-off bus or wander independently, but guided walking tours are the perfect introduction to Montreal for first-time visitors, who will learn all about the history of Canada’s 2nd-oldest city.
In the afternoon, stroll down toward the Old Port area for your first glimpse of the mighty St. Lawrence River. There’s a water-based tour option for all tastes, from gentle sightseeing cruises to paddleboat rentals and fast-paced Jet Ski tours.
Refuel with a typical grab-and-go Montreal meal of a bagel, smoked meat sandwich, or poutine (French fries and cheese curds covered in gravy) before setting out on a guided ghost walk around the cobbled streets and history-steeped alleys of Old Montreal (Vieux-Montréal).
Day 2: Country Escapes and City Views
Get out of the city today and enjoy an easy day trip to rural Quebec. Opt for a half-day or full-day tour of Quebec wine country. Visit vineyards in the Eastern Townships and take part in guided tastings of local wines and cheese, many of which aren’t available outside of Quebec. Alternatively, travel north from Montreal to the picturesque Laurentian Mountains, where you can visit country villages, cruise on scenic lakes, and ride a cable car to the top of Mont Tremblant.
Back in town, trade the rural panoramas for cityscapes with a nighttime hop-on hop-off bus tour. Disembark near the Plateau for a quick dinner in one of the area’s hip restaurants, then reboard to reach Mount Royal (Mont Royal). Trek to the park’s mountaintop lookout for unforgettable views over downtown Montreal and beyond.
Day 3: Multicultural Montreal
Venture beyond the boundaries of the downtown center to uncover Montreal’s multicultural side. Spend today getting to know other parts of the city and learning about the influence immigrant groups have had on the fabric of Montreal as well as its culinary scene. Explore the Plateau on a Jewish history walking tour, take a food tour of Little Italy or Chinatown, or join a walking tour along the Main—aka St. Lawrence Boulevard—stopping in Little Portugal, Mile End, and Little Italy for divine tastes of local specialties.
A guided afternoon bike tour of the city will allow you to cover even more ground and spot sights you’re unlikely to stumble upon while exploring solo, such as neighborhood parks and hidden-away eateries. Finish your trip in style with a dinner cruise along the St. Lawrence River, where you’ll be treated to front-row views of the dazzling skyline.
Read MoreShow Less
Montreal Tours & Activities (10)
Filter
•

127
No visit to Montreal is complete without a wander through Old Montreal (Vieux-Montreal), widely considered the best-preserved Old Town in North America. This walking tour takes visitors far from the beaten path and reveals a different side to the historic area, whose highlights include the Old Port and Notre-Dame Cathedral (admission included). Small-group tour limited to 10 people.
...  More
From
US$46.05
From
US$46.05
Learn More

734
Explore the best of Montreal on this narrated, hop-on hop-off, double-decker bus tour. Visit many of Montreal’s top attractions — like Notre-Dame Basilica, Chinatown, Mount Royal Park, Crescent Street, Old Port and Old Montreal, to name just a few. With this two day pass, you can board at any of the 10 stops and get to know the largest city in Quebec in customized fashion, with live onboard commentary from a bilingual professional tour conductor.
...  More
From
US$43.03
From
US$43.03
Learn More

203
Discover southern Quebec's beautiful Laurentian Mountains on this full-day tour from Montreal. Travel along narrow country roads admiring views of the breathtaking mountain range — including Mont Tremblant, well known for its popular ski resort. Stop in delightful towns like Saint-Sauveur, Saint-Adolphe-d'Howard and Mont-Tremblant. Enjoy free time to eat (own expense), shop and walk around these quaint, French-style villages. Then take a scenic cruise on Lac des Sables. It’s all in a day away from the hustle of city life on this picturesque sightseeing adventure. Montreal hotel pickup and drop-off included.
...  More
From
US$75.49
From
US$75.49
Learn More

79
Enjoy delicious cuisine and live entertainment with a view of Montreal and its surrounding islands on this dinner cruise along the Saint Lawrence River. On board the elegant Cavalier Maxim cruise ship, choose from one of three glass-enclosed dining rooms or head to one of the open-air outdoor terraces to admire the view. Dine on a delicious 5-course meal, then dance the night away or simply take in the view of the largest city in Quebec under a moonlit sky.
...  More
From
US$125.74
From
US$125.74
Learn More

186
Get a taste for Quebec’s surging wine industry during this half-or full-day small-group wine tasting trip from Montreal. Get the red carpet treatment from local vineyard owners as you enjoy insider tours and tastings at multiple wineries, choosing between a half-day afternoon trip or full-day experience. Take a workshop to learn tasting techniques to identify various wine flavor notes, testing your skill with a blind taste test, and enjoy a sampling of local cheeses. During the full-day excursion, you also receive a gourmet lunch.
...  More
From
US$85.78
From
US$85.78
Learn More

70
With 450 miles (650 km) of bike paths, Montreal was meant to be discovered by bicycle. During this 3-hour guided tour, cycle through the city’s various neighborhoods, main attractions and the most unusual locations. Your in-the-know guide takes you around the most popular districts and shows you lesser-known gems. This small-group tour is limited to just 13 people, ensuring a memorable experience. Once the tour ends, enjoy a complimentary drink (with or without alcohol) at a local establishment of the Old-Montreal near Ça Roule.
...  More
From
US$61.48
From
US$61.48
Learn More

13
See Montreal's night lights come to life on this double-decker bus tour around the city. Visit many of Montreal’s top attractions — like Notre-Dame Basilica, Chinatown, Mount Royal Park, Crescent Street, Old Port and Old Montreal, to name just a few. Board at Dorchester Square, then hop off at Old Montreal in front of City Hall.
...  More
From
US$24.16
From
US$24.16
Learn More

Under the Surface of Montreal's Chinatown: Guided Food Walking Tour

11
Satisfy your appetite for flavors and sights on this 4.5-hour food walking tour of Montreal’s Chinatown. A knowledgeable guide takes you to seven venues to taste a variety of culinary delights, including crispy pork, barbecue pork and duck, and Hong Kong–style dim sum. Learn how to make a Bahn Mi sandwich, sample Chinese pastries at a bakery and drink tea made from leaves grown on farms in China. Along the way, gain insight into Chinatown’s history and evolution to its mix of people and cultures today.
...  More
From
US$68.28
From
US$68.28
Learn More

Beyond the Bike Lanes Bike Tour

36
Get off the well-trodden path and enjoy Montreal like a local on this half-day bicycle tour. An in-the-know guide takes you to his favorite street-art and cultural corners, as well as a picnic lunch in a beautiful borough park with a local craft beer. This small-group tour is limited to just 10 people, ensuring personalized attention. Come away with a solid pulse on Montreal’s current culture and knowledge of hot spots frequented by locals.
...  More
From
US$67.46
From
US$67.46
Learn More