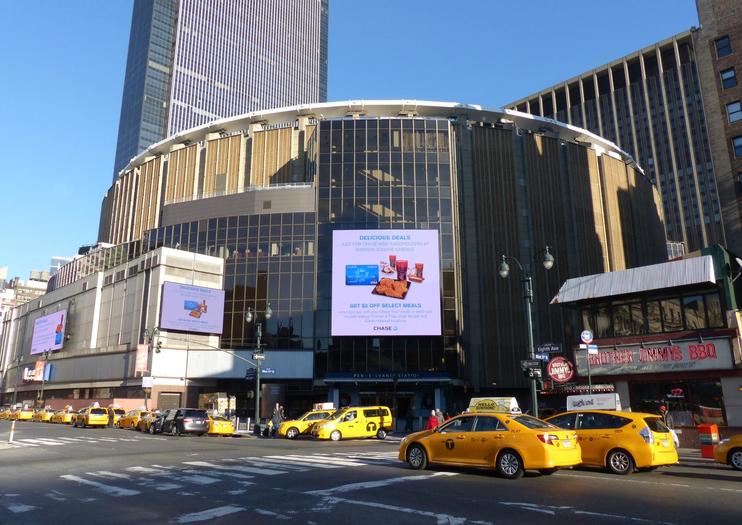 New York Penn Station (or officially, Pennsylvania Station), is a bustling transit hub. Regional trains serve New Jersey and Long Island, and Amtrak offers service to Upstate New York and nearby cities including Boston and Washington DC. In short, if you’re seeking a train to or from New York, you can likely find it at Penn Station.
The Basics
Though humble in its current form, Penn Station was once housed in a Parisian-inspired beaux arts building. Since its reconstruction in the late 1960s, most of the station—replete with myriad shops, eateries, and subway entrances—is located below ground. You can always book same-day travel out of Penn Station, but trains to popular destinations may sell out, especially at peak times. Consider purchasing tickets in advance to ensure a seat and avoid the crowds at ticket lines.
Things to Know Before You Go
How to Get There
Penn Station is centrally located in Midtown Manhattan, between 31st and 33rd streets, and 7th and 8th avenues. Enter on 7th Avenue for commuter rail travel to Long Island and New Jersey, and along 8th Avenue for Amtrak service to other cities. To get there most easily, take the A, C, E, 1, 2, or 3 subway train to 34th Street–Penn Station. Alternatively, the 7, 20, and 104 buses stop nearby.
When to Get There
As a major New York City transit hub, Penn Station is busiest during peak commuting hours on weekdays; consider arriving in the slightly less hectic late morning or early afternoon. New York weather is ideal in spring, summer, and autumn. If you travel by rail in October, you’ll be treated to lovely autumn-hued landscapes.
How to Visit New York’s Favorite Arena
Above Penn Station sits New York’s major arena, Madison Square Garden, situated at street level. The Garden hosts concerts, conventions, and New York Rangers hockey and New York Knicks basketball games. To see the city’s professional sports teams in action, consider buying tickets to a game before you head out of, or upon arrival at, Penn Station. You can even store your bags with Amtrak, inside Penn Station, before going to an event.
Address: 390 7th Ave, New York City, New York, USA, USA
Read MoreShow Less

6
Explore the America’s most historic landmarks and museums on a full-day trip to Washington D.C. from New York City. Start with a scenic journey by rail, then enjoy a 2-course lunch at the Hard Rock Café upon arrival in Washington.  Board a double-decker bus for a sightseeing tour of the city, and enjoy the freedom to hop-on and hop-off so you can explore the sights that interest you most. Visit D.C.’s marble memorials, moving cemeteries and government buildings at your own pace, then board an evening train back to NYC.
...  More
From
US$350.94
From
US$350.94
Learn More

Explore Philadelphia’s historic sites and highlights on a full-day sightseeing trip by rail from New York City. Start your day on the train, then visit the City of Brotherly Love at your own pace with a hop-on, hop-off sightseeing tour. Watch America’s earliest history come to life while visiting the Liberty Bell and Independence Hall then pause for a 2-course lunch at the Hard Rock Café. Spend the afternoon discovering museums that highlight Jewish-American and Constitutional history, automobiles and fine art before returning to NYC.
...  More
From
US$357.34
From
US$357.34
Learn More