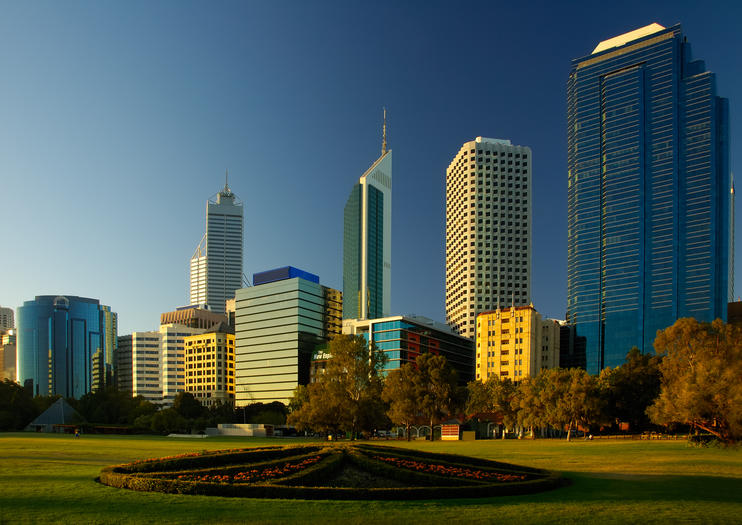 The Perth Cultural Centre is the city’s main destination for arts and culture. The museums, theaters, outdoor spaces, and other venues that make up the Perth Cultural Centre feature exhibits and events throughout the year, including Aboriginal and European artworks, modern art installations, film screenings, live theater, and much more.
The Basics
Nestled between Perth’s central business district and Northbridge, the Perth Cultural Centre is a stop on most hop-on hop-off bus tours and is easy to visit as part of a day of sightseeing—whether on your own or as part of a group tour.
Some of Western Australia’s most important cultural and educational institutions are located here, including the Art Gallery of Western Australia, State Library of Western Australia, Western Australian Museum, State Theatre Centre of Western Australia, Perth Institute of Contemporary Arts, and Blue Room Theatre.
Things to Know Before You Go
How to Get There
Bordered by Beaufort, Francis, William, and Roe streets, the Perth Cultural Centre sits on the edge of Northbridge, just across Roe Street from the Perth city train station. The complex can also be reached via the Blue CAT, a free bus service in the city center.
When to Get There
Each venue has its own hours of operation, so check individual websites to plan your visit. Generally, theater performances take place at night, while other venues are open during the day. The Art Gallery of Western Australia is closed on Tuesday; Perth Institute of Contemporary Arts is closed on Monday.
Exploring Northbridge
Located just north of the city’s central business district, Northbridge is one of Perth’s top dining, nightlife, and entertainment districts. There are a variety of restaurants and bars to check out before or after a show or museum visit at the Perth Cultural Centre.
Address: James Street Mall, Perth 6000, Australia
Admission: Free
Read MoreShow Less

With our walking tours, you’ll skip the mundane historical tours and discover the city through a local’s eyes. Experience a tour that will transform the way you travel to make it as much about the people you meet, as it is the places you see. Our local guides (Lokafyers) are passionate about their city and eager to share their knowledge and perspective. Since Lokafyers are not professional guides and tour occasionally, they provide an experience that’s authentic and personal, like a friend showing you around their city. By the end of the tour, you'll feel comfortable navigating the city and confident that you have all the information you need to make the most of your stay.
...  More
From
US$32.40
Price varies by group size
From
US$32.40
Price varies by group size
Learn More

1
Modern street art mixed with history, vibrant culture, and fascinating sights everywhere; Perth, is a magical place! On this private tour, get ready to discover the best highlights the city has to offer, as well as its unique hidden gems with your favorite local. Get ready to experience Perth the local way. Enjoy the city to the max and hear more about the origin, history, and culture of Perth. Check out public lanes bursting to the brim with murals and street art. ​See and touch Perth's ​history at the Court House from 1836, where exotic trees frame Central Perth's oldest surviving building. Follow your local host through Perth's streets and explore the historical Prohibited Area and its stories of Aboriginal struggles for justice. ​Stroll through the uniquely captivating Forrest Place and admire its organic sculpture.​ And step into the historic St. George's Cathedral for a lesson in some of Perth's most fascinating stories.
...  More
From
US$70.04
Price varies by group size
From
US$70.04
Price varies by group size
Learn More

Private 90 Minutes Kickstart Tour of Perth with a Local

First time in Perth? Wondering where to go and what to see in this colorful city? We got you! Kickstart your time in Perth ​with a 90-minute introduction to the city with the help of your favorite local. See the main highlights of Perth and discover the best the city has to offer. Your local host will answer all of your travel questions and will provide you with local insights and recommendations according to your liking. On this private tour, you’ll visit the must-see historical spots of Perth, but also see hidden places that will give an authentic feeling of the city. Go to the mind-bending Floating Sphere, the towering murals on the TAFE wall, and find out what makes the Cultural Centre so special. Hear all about how a public lane turned into a massive art project and more.​ Ready for a unique private tour through this vibrant city? Any questions? Go ahead and ask your local host about anything that pops into your mind and get all the answers you need for the perfect Perth ​trip.
...  More
From
US$32.15
Price varies by group size
From
US$32.15
Price varies by group size
Learn More

Things to do near Perth