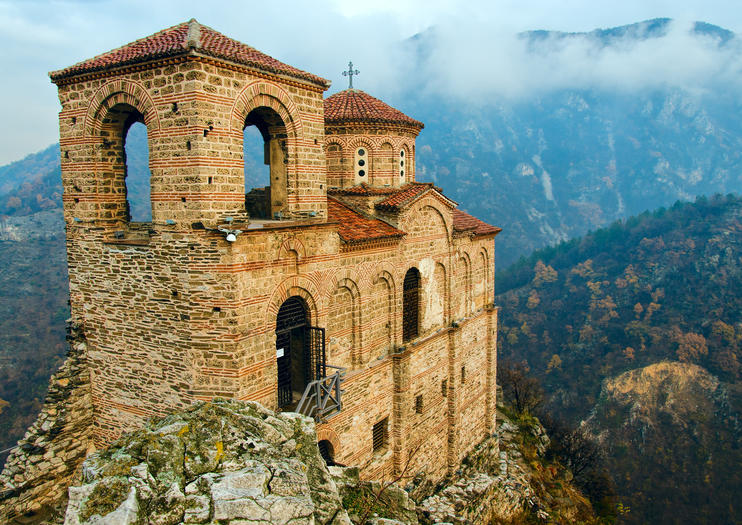 Called Petrich by some, Asen’s Fortress (Asenova Krepost) is a medieval fortress in Bulgaria’s Rhodope Mountains. Sitting high on a rocky ridge on the left bank of the Asenitsa River, the fortress was built during the reign of Byzantine Emperor Justinian the Great in the 6th century and grew to prominence during the Middle Ages. It fell into ruins after the Ottoman conquest in the 14th century, with only the Church of the Holy Mother of God surviving. One of the oldest remaining Eastern Orthodox churches, the two-story building features a large rectangular tower and mural paintings that date back to the 14th century. Renovated in 1991, it is used today by the Bulgarian Orthodox Church.
The fortress is also a stop on a hiking trail that takes hikers on to several chapels and, eventually, Bachkovski Monastery.

Asen’s Fortress is located 20 kilometers south of Plovdiv and about three kilometers south of the village of Asenovgrad. Buses to Asenovgrad leave from Plovdiv’s south bus station on bul. Hristo Botev about every 30 minutes during the week and slightly less frequently on the weekends. Trains also run between Plovdiv and Asenovgrad hourly. Walk or take a taxi up to the fortress from Asenovgrad.
Plan to spend about 45 minutes at the fortress. Guided tours in English are available for an extra cost.
Address: 1 Trakia Square, Asenovgrad, Bulgaria
Hours: Nov-Mar: Wed-Sun 10am-5pm; Apr-Oct: Wed-Sun 10am-6pm
Admission: 4 lv
Read MoreShow Less

Day-Trip to Bachkovo Monastery and Asen's Fortress from Plovdiv

A tour that encompasses the rich culture and history of Bulgaria's Rhodopes - a mountain known for its gorgeous scenery and fascinating traditional rural villages. Asen's Fortress (13th century) is located only 25 minutes from Plovdiv and offers a glimpse at Beulgarian history during medieval times. Nearby is the second largest monastery in Bulgaria - Bachkovo Monastery, a stunning work of architecture. It is home of the Miracle Working Icon of the Holy Virgin, an icon that is said to heal ailments and bring good fortune. The road up to the monastery is lined with market stalls selling local herbs, spices, jams and honey, and the restaurants offer some of the best traditional cooking in the country.
…More
From
US$61.51
Price varies by group size
From
US$61.51
Price varies by group size

Our private tour brings you to the top spots around Plovdiv at your own pace and starting time from Plovdiv. Your private local guide is also your driver with the comfortable vehicle. All entrance fees are included in the privately-guided option. Wonderful Bridges are a natural phenomenon, which is believed to had formed during the collapse of former cave formed in Proterozoic marbles from the waters of a small river deep gully probably an earthquake. Bachkovo monastery "Uspenie Bogorodichno" was founded in 1083 by the Georgian Gregory Bakuriani, who made a donation to the building. Asen's Fortress - one of the most preserved fortresses in Bulgaria. Truly breathtaking scenery, views and history behind it!
…More
From
US$40.63
US$46.18
US$5.55 savings
Price varies by group size
From
US$40.63
US$46.18
US$5.55 savings
Price varies by group size
Hand sanitizer available to travelers and staff
Social distancing enforced throughout experience
Regularly sanitized high-traffic areas
Learn More
Taking safety measures

44
You will be accompanied by a private licensed tour guide during the whole day. You can stop for pictures and refreshments any time. Plovdiv isn’t just the oldest city in Bulgaria… it’s one of the oldest cities in the world. Historians agree that this scenic valley in the south of Bulgaria has been inhabited for more than 5,000 years – but some will tell you that Plovdiv’s history goes back further still, for as much as 8,000 years of continuous habitation! So what can you expect on a Plovdiv day excursion or tour? During this day tour to Plovdiv we will visit the Bachkovo monastery, the Asen’s fortress and the must seen places in Plovdiv – the Old town from 19th century; the Ethnographic museum; Balabanov house; the Ancient theater of Philipopolis; the Ancient stadium of Philipopolis, The St St Constantin and Elena church, The Djumaya mosque and square, The building of the Regional Historical museum, the Main walking street, “The Trap” neighborhood; Nebet tepe and more.
…More
From
US$369.03
per group
From
US$369.03
per group

Nearby Plovdiv is located Asenovgrad town, better known as the Bulgarian Jerusalem.  It is also called the city of brides, but its symbol is the medieval fortress named after the Bulgarian king Ivan-Asen II. Asen’s fortress still controls the passage through the Rhodope Mountains, leading us to the Bachkovo monastery – the second biggest in Bulgaria and the most impressive with its miraculous stories. Once entered in this area, you’ll definitely hear about Mavrud – man, hero or wine? – Many legends are speaking about one fabulous wine – the Mavrud from Asenovgrad!
…More
From
US$69.85
Price varies by group size
From
US$69.85
Price varies by group size
Hand sanitizer available to travelers and staff
Social distancing enforced throughout experience
Regularly sanitized high-traffic areas
Learn More
Taking safety measures

Discover the ancient history and stunning nature of the Rhodope Mountains within an hour drive from Plovdiv. This tour will not only introduce you to the area's most prominent architecture examples - Asen's Fortress and Bachkovo Monastery, but also will lead you deep into the roots and traditions of the local people. You will visit a village which locals refer to as 'the village where time has stopped'. Not visited by many tourists today, this place still preserves the authentic lifestyle and architecture of its dwellers. You will get the chance to taste the most delicious specialities of the region made by our lovely hosts who have prepared a bag of stories for you. Your adventure ends with the magnificent natural phenomena - The Wonder Bridges, which fascinated its visitors with its grandeur beauty and mystical energy.
…More
From
US$156.84
Price varies by group size
From
US$156.84
Price varies by group size

1
Take a break from the city without the hassle of navigating on a private day trip through the Plovdiv countryside. In addition to providing round-trip hotel transport, your guide offers background and historical anecdotes at each stop on the itinerary. Tour a winery and sample their selection, chat over a traditional Bulgarian lunch, and round off the day with a stop at the historic Bachkovo Monastery.
…More
From
US$120.77
Price varies by group size
From
US$120.77
Price varies by group size

Private Day Trip to the Rhodopi Mountain from Plovdiv

This tour is a great combination of nature and heritage. It starts at 9am when the guide will take you from your hotel and you will head to the nearby Rhodopi mountain. Your first stop will be at the remains of the old medieval Asen`s Fortress and its church. It is situated on a very vivid place from where you can see amazing panoramic views and take astonishing photos. After that, you will continue to the small mountain village of Bachkovo where you will visit the second biggest monastery in Bulgaria- Bachkovo monastery. It is famous for the icon of Virgin Marry, dating back to the 14th century, which is taught to be miraculous and thousands of people each year come to see it. Then you will go for a hike in the mountain. The trails starts just next to the monastery. The hiking is with moderate difficulty and takes about 1-2 hours. Finally, you will also have time for a lunch break in one of the traditional local restaurants.
…More
From
US$88.80
Price varies by group size
From
US$88.80
Price varies by group size

3
Get out of the city and explore the notable religious sites around Plovdiv on this private day tour. Travel with a guide towards the Rhodope Mountains and visit King Asen's Fortress in Asenovgrad. Stop at the 11th-century Bachkovo Monastery and learn about its history. Choose to take a walk in the Red Wall Nature Reserve.
…More
From
US$59.20
Price varies by group size
From
US$59.20
Price varies by group size
Face masks required for guides in public areas
Hand sanitizer available to travelers and staff
Regularly sanitized high-traffic areas
Learn More
Taking safety measures

Explore Bulgaria’s rugged wilderness on two wheels on this private full-day cycling tour in the Rhodope Mountains from Plovdiv. Hop onto your bicycle and follow your private guide into the Bulgarian countryside. Head through the Rhodope mountain range, home to plummeting river gorges, soaring peaks and mighty rivers. Discover dense forest and rolling hillsides, and visit top local sites including the Bachkovo Monastery and the village of Shiroka Laka. Finish with a soak in Devin’s wonderful hot springs and soothe aching muscles in style before your transfer back to Plovdiv.
…More
From
US$93.53
Price varies by group size
From
US$93.53
Price varies by group size
Hand sanitizer available to travelers and staff
Social distancing enforced throughout experience
Regularly sanitized high-traffic areas
Learn More
Taking safety measures

Fully personalized electronic and audio guide with all info and logistics for you. Live maps and route for you to follow. An unique product which brings you stress-free travel at your own pace in Assen's Fortress. Very flexible and easy for the customer.
…More
From
US$10.66
From
US$10.66
Hand sanitizer available to travelers and staff
Social distancing enforced throughout experience
Regularly sanitized high-traffic areas
Learn More
Taking safety measures

Fully personalized electronic and audio guide with all info and logistics for you. Live maps and route for you to follow. An unique product which brings you stress-free travel at your own pace in the The Wonderful Bridges near Chepelare. Very flexible and easy for the customer.
…More
From
US$10.66
From
US$10.66
Hand sanitizer available to travelers and staff
Social distancing enforced throughout experience
Regularly sanitized high-traffic areas
Learn More
Taking safety measures

Things to do near Plovdiv