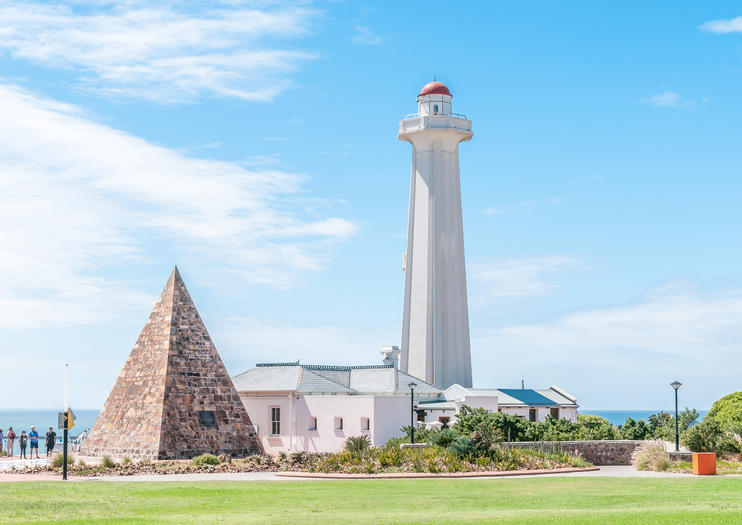 The Donkin Reserve introduces visitors to the early history of Port Elizabeth by way of a small park, stone pyramid, and lighthouse overlooking the South African coastline. Built as a touching memorial to Elizabeth Donkin—wife of 19th-century Cape Colony Governor Rufane Donkin—the hilltop memorial commemorates the woman for whom the city is named, with an inscription that reads: “In the memory of one the most perfect of human beings who has given her name to the town below.”
While you won’t likely spot much wildlife in this reserve, you will find excellent views from atop the lighthouse, as well as walking trails and the terminus of the larger Route 67 Art Trail—a walking tour of 67 pieces of public art representing Nelson Mandela’s 67 years of service to end apartheid in South Africa.

6
When your cruise ship docks in Port Elizabeth, make the most of your time on a walking tour of the city. Ensure you don't miss any of the highlights or must-see landmarks on this comprehensive tour, with a guide providing extensive commentary as you stroll. Stretch your legs and visit the five different biomes that exist within the city limits, as well as important sites such as Campanile Memorial, the Donkin Reserve, and Route 67.
...  More
From
US$30.08
From
US$30.08
Learn More

2
Explore Port Elizabeth’s highlights with a local guide on a half-day shore excursion that’s tailored to your ship’s schedule. Visit the City Hall, markets, squares, and parks, and learn about Port Elizabeth's history and culture along the way. Enjoy a convenient pickup and drop-off at the cruise port by luxury vehicle, all entrance fees included, and a small group of 13 people for personal service.
...  More
From
US$108.30
From
US$108.30
Learn More

9
Explore Port Elizabeth with a local guide on a walking tour of the city. As one of South Africa’s oldest cities, Port Elizabeth has a long and storied history. Visit the Campanile Memorial, Fort Frederick, Market Square,, Donkin Reserve, and St. George’s Park Cricket Ground, home to one of the oldest cricket clubs in South Africa. You’ll also be treated to scenic views along the way.
...  More
From
US$30.08
From
US$30.08
Learn More

1
Experience Port Elizabeth on this full-day tour, which includes stops a local breweries and a township cultural experience. Follow a guide on a walking tour thought the city center, stopping at highlights such as Donkin Reserve at Belmont Terrace, the old lighthouse, and Fort Frederick. Stop at a craft brewery for a beer tasting and have a meal with a local family in Walmer Township.
...  More
From
US$87.24
From
US$87.24
Learn More

1
This full day tour includes a walking city tour through the historic city of Port Elizabeth, highlights during this part of the tour include a visit to the Campanile Tower, City Hall, The City Library, Route 67 art walk, the Donkin Reserve including the best view of Port Elizabeth. The next stop is at The Dockside Brewery, a local brewery specializing in small quantities of extremely special beer, the next brewery on route is The RIchmond Hill Brewing Company where you can sample some more special local beers. The last part of the tour takes place in Walmer Township, one of the oldest and most unique townships in South Africa. Take a walk through the streets with your local guide and learn more about the often undocumented history of this unique area. At the end of the tour you can enjoy a meal with local family.This a fantastic cultural experience that should not be missed by anyone visiting South Africa.
...  More
From
US$96.27
From
US$96.27
Learn More

Play an 18 hole game of Golf with Friends. This is a beautiful course. Well maintained and reasonably challenging.
...  More
From
US$92.57
From
US$92.57
Learn More

Things to do near Port Elizabeth