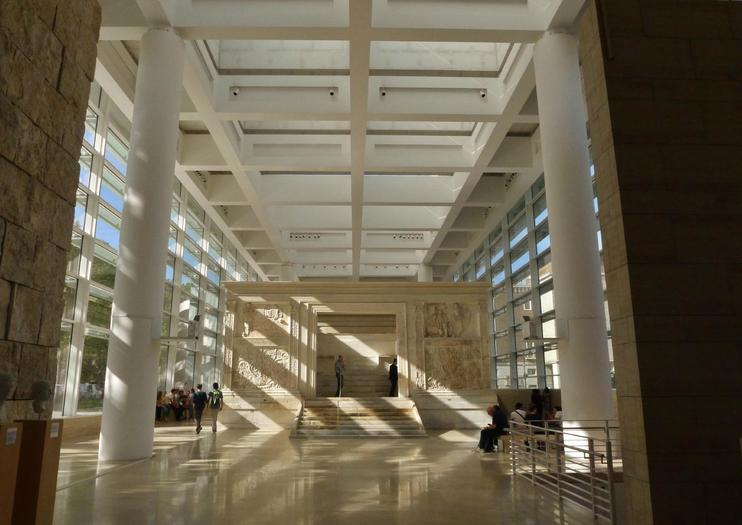 Since opening its doors in 2006, the Ara Pacis Museum (Museo dell'Ara Pacis) has caused more than its fair share of controversy, with its modernist glass and travertine façade splitting public opinion. The futuristic building, the work of architect Richard Meir, was one of Rome’s first major post-war architectural works and was built to house one of the city’s most significant ancient artworks.
Whatever your opinion of the museum itself, there’s no disputing the magnificence of its star exhibit – the Ara Pacis, or Altar of Peace, which dates back to 9 BC. The elaborate Roman sculpture is a gigantic marble altar towering over 35 feet (11 meters) high and built by the Emperor Augustus to symbolize peace in the Roman Empire. Today, the protected monument is preserved and displayed in its full glory, with the original structure augmented by reproductions of the panels already on display in the Villa Medici, the Vatican and the Louvre.

Tired of daytime crowds? This private tour is for you! Come with us for this walking tour of Rome by night arranged just for you and yours! Rome is undoubtedly one of the world’s most beautiful cities and there’s no experience quite like taking in her beauty at night when only a little part of the usual crowds are present. Enjoy the illuminated monuments, fountains, squares and bridges at night for an unrivaled way to discover many selected landmarks, without suffering the stress of huge crowds invading the area during daily visiting hours. Follow our guide as the lights of the city come alive, blending centuries of history with the modern lively Rome, and you will take in the best night time scenes Rome has to offer! The tour includes: - Professional Certified Guide - Italian Dinner
...  More
From
US$231.09
Price varies by group size
From
US$231.09
Price varies by group size
Learn More

12
Combine the convenience of a guided tour with the flexibility of independent travel on a 24- or 48-hour hop-on hop-off bus tour of Rome. Along the way, enjoy a skip-the-line tour of the Colosseum and four optional walking tours, taking in sights such as Castel Sant’Angelo, Capitoline Hill, St. Peter Basilica, the Spanish steps, and the Pantheon.
...  More
From
US$82.59
From
US$82.59
Learn More
Reserve Now & Pay Later
We'll reserve your spot today, and you can cancel up to two days* before your experience without making a payment. Secure your spot with ease, stay flexible, and never miss out.
How it works
Find your experience
Choose the experience you want knowing you can secure your spot without being locked in.
Make a reservation
Reserve now and pay later to secure your spot, commitment-free.
Choose when to pay
Come back to pay once your plans are set, or let auto-pay kick in two days* before your experience.
Enjoy your experience
Now you're all set! Have a great time.
Frequently Asked Questions  | Terms & Conditions
*Up to 9 days depending on the booking/product
Reserve Now & Pay Later
Secure your must-do activities without being locked in
Learn More

Step back into ancient Rome on a 3-hour, small-group tour of the Imperial Forum, the Pantheon, and the Museo dell’Ara Pacis, which houses a remarkable altar to the goddess of peace You’ll learn about Rome’s fascinating history and colorful characters along the way, while following in the footsteps of Caesar, Augustus, and Nero. This 3-hour Roman history tour is limited to 13 people for personal service, and both morning and afternoon departures are available.
...  More
From
US$383.01
per group
From
US$383.01
per group
Learn More

Piazze di Roma – The Living Rooms of the City

4
Mystery buffs and ghost story aficionados can discover Rome through the lens of its haunted streets and creepy sights by following a trail of ghostly clues through the Eternal City. Download this app on your mobile device and follow the directions to a series of locations in the historic center, learning about ghostly legends and real-life horrors along the way.
...  More
From
US$6.88
From
US$6.88
Learn More

Get out of the historical center for a little while and discover another side of Rome: the city's striking and dazzling modern architecture. See recent works by famed architects such as Zaha Hadid and Renzo Piano, among others, while cruising around in a comfortable car with your guide on this unconventional tour.
...  More
From
US$239.39
per group
From
US$239.39
per group
Learn More

3
Check out Rome’s famous sites the easy way on a bike tour led by a local professional guide. Cruise around the astonishing architectural wonders of central Rome, from the grandiose ancient Colosseum to hidden delights such as the Mausoleum of Augustus and baroque jewels such as Piazza Navona. Plus, make the most of the pedestrianized areas around the ancient Roman Forum. Choose from a morning or afternoon departure and enjoy the personalized atmosphere of this small-group tour.
...  More
From
US$44.81
From
US$44.81
Learn More

6
At your service, the driver will wait you at the airport and bring you to your destination in Rome. Choose when you want to start your self-guided private-tour. The chauffeur can show you the most attractive places of the city at your arrival or when you prefer during your holidays in Rome. The service is available from 1 up to 8 passengers. No stress, no waste of time searching or waiting the taxi at the airport, know in advance how much you are going to spend. A professional driver (not a guide) will wait you at the airport to bring you wherever you want in Rome and than you will admire the city with a 3 hour private tour.
...  More
From
US$224.06
per group
From
US$224.06
per group
Learn More

A trusty official Vatican guides guide who wears a blue jacket with the Vox Mundi logo printed on it, and waiting to show you around one of Rome's most glorious buildings: St. Peter's Basilica. Wander around St. Peter's Basilica will be more meaningful because you will also learn hows, whos and whys of this magnificent masterpiece. This historic place is not only a Christendom a religious landmark, it's more or less a piece of art too. Here you might to learn outstanding Renaissance architecture and witness art by the likes of Donato Bramante, Carlo Maderno, Gian Lorenzo Bernini and more. Learn the story behind the 'Chair of Saint Peter', an ancient and legendary chair that may have been used by the first ever pope - and get the facts on how and why this mammoth basilica was built.
...  More
From
US$39.08
From
US$39.08
Learn More

Have a limited stay in Rome? See more in less time—and sightsee according to your own schedule—when you book a hop-on hop-off bus tour, available for windows of 24 or 48 hours. Additionally, your itinerary also includes a walking tour of the Roman Forum and Palatine Hill; pick from two different daily departure times, meet your guide, and, with skip-the-line access, get ready to explore.
...  More
From
US$55.06
From
US$55.06
Learn More

Get ready for a fantastic trip into a postcard landscape! Appreciate the best and amazing panoramic view of the Eternal City, led by your guide through the highlights of Rome. Enjoy the best and most romantic views of the Eternal City on a bike ride of the seven hills of Rome. Have a unique view of the Forum from Quirinale Hill. Admire Popolo square from the romantic Pincio Terrace, and reach the most magical panoramic view of the city at the Janiculum Hill, from where nothing can be hidden! Continue your ride on the Aventine Hill and the Orange's Garden that offers a unique view of Saint Peter. Your experience in Rome continues with a real exclusive back in time trip on the footsteps of the Ancient Roman Empire with the visit to the Colosseum, Rome's most significant monument. Value your time and increase your experience thanks to the skip-the-line! Explore the two tiers of the mighty Flavian Amphitheatre and hear stories of the bloodthirsty spectacles and much more.
...  More
From
US$113.75
From
US$113.75
Learn More

After a decade running our Rome at Dusk walk, we made the easy decision to offer more places to see under the stars with semi-private transport and time enough for a dreamy gelato beside a glittering fountain! There are simply so many places to cover on foot in Rome at any one time, especially in the evening when the streets are less populous, so we selected a local expert driver guide, a comfortable car with wifi / all mod cons, and a fantastic route through the heart of historic Rome! If you have taken walking tours earlier in the day and missed one or two must-sees, sit back, relax, and bring your Roman Holiday to a comfortably thrilling conclusion!
...  More
From
US$102.26
From
US$102.26
Learn More