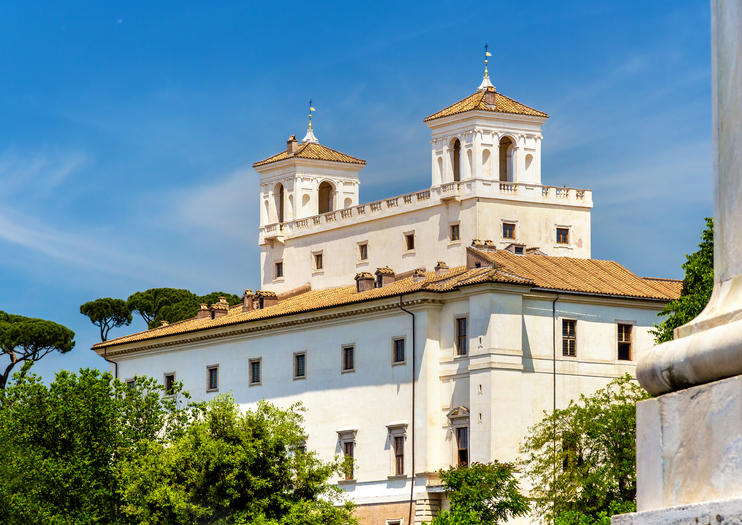 The Medici family is most closely associated with Florence, but this Villa Medici (not far from the Villa Borghese) has been in Rome since 1576.
The villa was purchased by Cardinal Ferdinando I de’ Medici before it was finished, making it the first Medici property in Rome. The property had been a vineyard for quite awhile before construction began, and the villa eventually was surrounded by more manicured gardens and groves of trees.
The Villa Medici is the home of the French Academy in Rome since 1803, when Napoleon had obtained the villa. To this day, the villa is still an art academy to which artists are invited to live and work for a period of a year. There are regular art exhibitions and shows, as well as music performances and open-air cinema events. The events schedule changes regularly.
There are guided tours of the Villa Medici gardens and apartments available throughout the year. Most tours given are in French, with one English tour given each day at noon. Tours last about 1.5 hours.

When the apartments of the Villa Medici are not occupied by artists-in-residence, they are available to rent. There are more modern rooms, but some are the original apartments to the villa and feature Renaissance frescoes.
Address: Viale della Trinita dei Monti 1, Rome, Lazio 00187, Italy
Hours: Tue-Sun 10am-7pm (last admission 6:30pm)
Admission: €12 adults (children under 10 FREE)
Read MoreShow Less

The answers provided below are based on answers previously given by the tour provider to customers’ questions.
Q:
What are Villa Medici hours of operation?
A:
Villa Medici hours of operation: Tue-Sun 10am-7pm (last admission 6:30pm). Buy tickets in advance on Viator. If you book with Viator, you can cancel at least 24 hours before the start date of your tour for a full refund.