How to Spend 3 Days in Stockholm 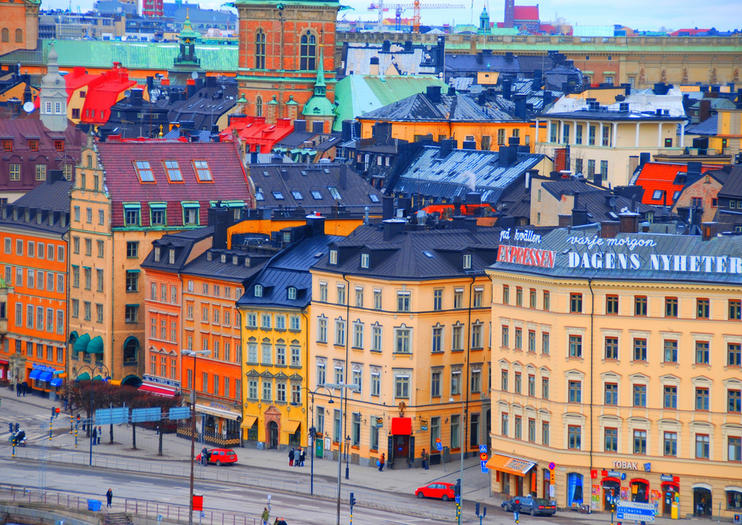 With three days in Stockholm, you have plenty of time to soak in the city’s atmosphere, see its most famous sights—by both land and water—and even head out of town for a history- or nature-filled day trip into the surrounding countryside. Here’s how to experience the best of Stockholm in 72 memorable hours.
Day 1: See the City’s Sights
Spend your first day in the Swedish capital getting your bearings and hitting the top sights. There are multiple ways to explore Stockholm. You can take a bus tour or a boat tour, or a combination of both. Guided tours by both bus and boat typically take visitors to major attractions including the Royal Palace, City Hall, and the Vasa Museum, and conclude with a cruise around the Stockholm archipelago. With many miles of bike lanes and a population for whom pedaling is a part of life, Stockholm is an exceptionally bike-friendly city, so another option is a guided bicycle tour, which has the added benefit of reaching places missed by big buses. Alternatively, a hop-on hop-off sightseeing bus or boat tour allows you to set your own schedule, create your own itinerary, and spend as long as you like at each stop before continuing along the route.
Day 2: Get Out on the Water
As Stockholm is spread across 14 islands, water is a crucial element in the very existence of Stockholmers. Immerse yourself in this aspect of Stockholm life on a sailing or kayaking tour around the archipelago—which is made up of around 3,000 islands in total. Tours typically include onshore time on one of the islands and the opportunity to swim in the water; many often also provide lunch.
If you’d rather not stray too far from the city center, you can cruise Stockholm’s central canals and islands on a sightseeing tour by boat. Tours typically offer historical and cultural insight into the city as you glide through tranquil waterways lined with interesting architecture and leafy vegetation, and past such central islands as Reimersholme, Långholmen, and Kungsholmen.
Continue the watery theme by boarding a dinner cruise. Tours typically include a 3-course meal, offering dinner with a view and a relaxing way to top off the day.
Day 3: Venture into Viking or Wildlife Territory
Sweden is, of course, land of the Vikings, and you can uncover some of the secrets of this heritage during a full-day trip from Stockholm into the surrounding countryside. Tours typically head to historic sites such as the ruins of an ancient Viking parliament, runic stones, and burial mounds. Viking heritage–focused tours usually also visit Sigtuna, Sweden’s longest established town, and the Norse religion cultic center of Gamla Uppsala.
If you’re more interested in the natural world than ancient history, you can take a wildlife-focused evening excursion from Stockholm. Tours typically head into the rural landscapes surrounding the Swedish capital, delving into the dense forest to track wild boar, hares, deer, and elk, who are all at their most active at the beginning and end of the day.
Read MoreShow Less
Stockholm Tours & Activities (8)
Category
Filter
•

269
See the spectacular sights of Stockholm during a City Sightseeing hop-on hop-off bus tour. Disembark whenever an attraction captures your interest then simply await the next bus when you want to continue your tour. Venture to various stops scattered around the city, seeing legendary landmarks like the Vasa Museum, the Stockholm Royal Palace, and the Gamla Stan. Enjoy the freedom and flexibility of this experience in the sparkling capital of Sweden.
...  More
From
US$39.07
From
US$39.07
Learn More

Stockholm at a Glance Bike Tour

127
Cycle around Stockholm's central islands during this 3-hour guided sightseeing tour on a bike. Follow your local cyclist guide to the city's most important landmarks and stop by some hidden gems as well, many of which are only accessible by bike or on foot. Stockholm's general bike-friendliness and many cycling lanes make it easy to explore on two wheels. Visit Kungliga Slottet (the Royal Palace), the Swedish Parliament, the stately Royal Dramatic Theatre and Gamla Stan (Old Town) with engaging, informative commentary from your guide. Bikes and helmets are provided.
...  More
From
US$50.39
From
US$50.39
Learn More

22
Spend the day on a yacht in Stockholm's scenic archipelago during this full-day excursion from Vaxholm. All hands are on deck as you help steer and crew the ship yourself under the direction of an expert skipper. Disembark on a picturesque island to explore its rocky shores and swim in the bracing ocean. Enjoy a traditional Swedish lunch on board the boat. No sailing experience is necessary to enjoy this day on the water, and all equipment is provided.
...  More
From
US$257.65
From
US$257.65
Learn More
Reserve Now & Pay Later
We'll reserve your spot today, and you can cancel up to two days* before your experience without making a payment. Secure your spot with ease, stay flexible, and never miss out.
How it works
Find your experience
Choose the experience you want knowing you can secure your spot without being locked in.
Make a reservation
Reserve now and pay later to secure your spot, commitment-free.
Choose when to pay
Come back to pay once your plans are set, or let auto-pay kick in two days* before your experience.
Enjoy your experience
Now you're all set! Have a great time.
Frequently Asked Questions  | Terms & Conditions
*Up to 9 days depending on the booking/product
Reserve Now & Pay Later
Secure your must-do activities without being locked in
Learn More

44
Explore Sweden's forests and view the native wildlife on this 4-hour sunset safari. Departing from Stockholm with a local guide, travel by comfortable minivan from the city out into the more rural landscapes surrounding the Swedish capital. Delve into the dense forest to track wild boar, hares, deer and elk. Take a short forest hike and pause to check out some ancient Viking runes. Embarking on the safari at sunset ups the chances of coming upon these creatures, who are most active during the beginning and end of the day.
...  More
From
US$147.72
From
US$147.72
Learn More

9
Cycle through Stockholm's top attractions and hidden gems on this 3-hour private bike tour with a local guide. Pedal through Kungsholmen and Södermalm, tour the medieval neighborhood of Gamla Stan (Old Town), and stop by landmarks like the Ridddarholmskyrkan and the Stadhuset (City Hall). Along the way, stop for a 'fika', a traditional Swedish coffee and pastry break at a local café. Use of a bicycle is included.
...  More
From
US$211.27
Price varies by group size
From
US$211.27
Price varies by group size
Learn More

13
Paddle your way through Stockholm's archipelago on this full-day kayaking tour. Whether you are a novice or an experienced kayaker, this excursion allows you to immerse yourself in the rugged beauty of the unspoiled wilderness found just offshore from Sweden's cosmopolitan capital city. Kayak to a secluded island for a refreshing swim, lunch and a traditional afternoon coffee break, or 'fika'. Paddling instruction from an expert guide and all kayaking gear is included.
...  More
From
US$193.53
From
US$193.53
Learn More

There are more than 25,000 islands in the Stockholm archipelago yet many visitors leave without getting out on the water to see them. On this small-group guided kayaking trip through the north archipelago you will get a better perspective of the region and get to see your guide's personal favorite spots. You'll stop for lunch at a particularly scenic spot for an included lunch and maybe even see a white-tailed eagle flying over the islands.
...  More
From
US$121.70
From
US$121.70
Learn More

124
Delve into Sweden’s fascinating Viking heritage on a half-day tour from its captivating capital, Stockholm. Uncover the mysteries of the country’s rich history with an accomplished guide and visit sites of profound cultural interest. See a collection of ancient runic stones at Täby and decipher ancient inscriptions at Granby. Convenient round-trip transportation from your hotel is included in this tour.
...  More
From
US$136.84
From
US$136.84
Learn More