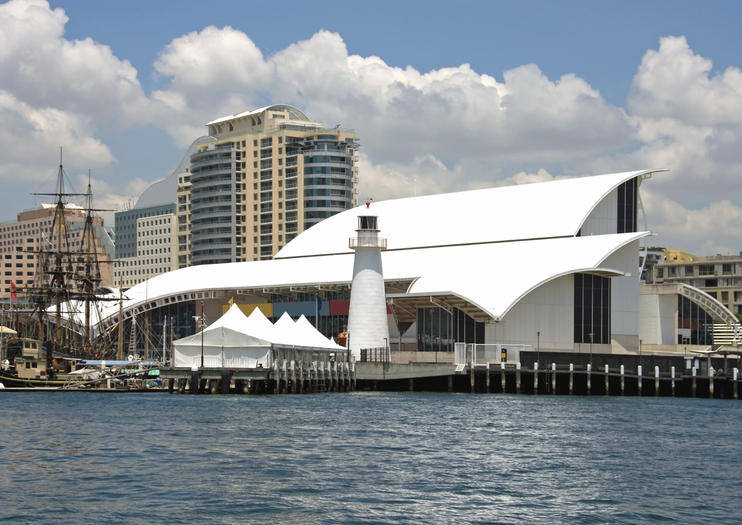 Be it surfers on the beaches, the discovery of Australia via the sea route from Europe or the subsequent commerce and immigration—Australia is closely tied to water. The Australian National Maritime Museum acts accordingly in featuring rich exhibitions ranging from the time of the Eora First People to the First Fleet all the way to the present. Visitors learn how convicts traveled in dark and damp accommodations and how passengers sailing to a new life survived long ocean journeys through reconstructed stories made up of artifacts and mementos left behind.
Those interested in military history can make their way to the Navy exhibit, which explores naval traditions during war and peace times. Here, visitors get the chance to test a submarine’s periscope and try out a soldier’s cramped bunk bed. The museum even has its own fleet, with many of the vessels accessible via guided tour. Anchored in the harbor are a warship, the destroyer HMAS Vampire, a submarine and an exact replica of the HMB Endeavour, the ship with which James Cook reached Australia in 1770, among others. The submarine was decommissioned only in 1999 and is still in close to operational condition. Its diving alarm often gives visitors quite a fright.

The Australian National Maritime Museum is located in the center of Sydney on Darling Harbour and can be reached easily by bus number 443 from Circular Quay. From there ferries depart to Pyrmont Bay Wharf every half an hour as well. The museum is open daily from 9:30 a.m. to 5 p.m. but is closed on Christmas Day.
Address: 2 Murray Street, Darling Harbour, Sydney NSW, Australia
Hours: Open daily from 9:30 a.m. to 5 p.m. Closed Christmas Day.
Admission: General Admission: Adults (16+) $7 AUD, Children (4-15) $3.50 AUD
Read MoreShow Less

224
Customize your sightseeing in Sydney with a hop-on hop-off coach tour and harbor cruise. The ferry pass is valid for 2 days and the explorer pass is valid for 48 hours, giving you two full days to explore Sydney. The Sydney Harbour ferry cruise stops include Darling Harbour, Circular Quay, Luna Park, Manly, Taronga Zoo, Barrangaroo and more. The double-decker bus tour travels between iconic sites including The Rocks, Sydney Opera House, Royal Botanic Gardens and Bondi Beach. Choose to hop off and visit places of interest, or simply remain on board for a comprehensive overview with recorded commentary.
...  More
From
US$78.91
From
US$78.91
Learn More

31
When your cruise ship docks in Sydney, enjoy a family-friendly hop-on hop-off sightseeing tour that covers Sydney and Bondi Beach. Travel by double-decker bus with an open-top that allows for unobstructed views of all the sights, including Sydney Opera House and Sydney Harbour Bridge. Have the freedom to create your own itinerary, choosing from 34 stops where you can hop off and explore in depth. Ejnoy the informative pre-recorded onboard commentary in your choice of eight languages along the route, which includes Circular Quay, Kings Cross, the Rocks, Double Bay and Bondi Beach.
...  More
From
US$37.41
From
US$37.41
Learn More

12
Visit Sydney's top attractions and enjoy savings of up to 45% with the Sydney Explorer Pass. Browse the list of 25+ experiences and have your choice of three, four, five, or seven popular attractions, and tours to take in anytime within a 60-day period. Options include a tour of the Sydney Opera House, a Hop-On Hop-Off Sydney and Bondi Bus Tour, WILD LIFE Zoo, and admission to the Australian National Maritime Museum.  Simply save your pass on your mobile device after purchase and enjoy direct entry to each attraction — no voucher redemption required. Please note: Enjoy the extra flexibility in case your travel plans need to change: All passes (purchased by December 31) are valid for two year from purchase date and only become activated with your first attraction visit. After activation your pass will be valid for 60 days and/or the remaining number of attraction choices purchased.
...  More
From
US$82.00
From
US$82.00
Learn More

42
IF BOOKING MORE THAN ONE BOAT MAKE SEPARATE RESERVATIONS FOR EACH BOAT. Experience the adventure of a lifetime on our Speed Boat Adventure Tour®. Navigate and captain your own red speedboat for the entirety of the tour while following our trained and knowledgeable guides to experience the best of both worlds - the THRILL of driving your own speedboat, and the safety of having a skilled guide leading you around Sydney Harbour. See The Harbour Bridge, Sydney Opera House, Fort Denison, Taronga Zoo, and more. See them from a whole new perspective that simply cannot be matched by big sight-seeing vessels.
...  More
From
US$73.92
Price varies by group size
From
US$73.92
Price varies by group size
Learn More

425
Visit some of the top 35 attractions in Sydney with the convenience of the Sydney Attractions Pass, the perfect travel companion for exploring Sydney and its surroundings. Whether you plan to check out the Sydney Opera House, Taronga Zoo and SEA LIFE Sydney Aquarium, or you wish to go out to Manly and the Blue Mountains, the Attractions Pass is a cost-effective choice. Save up to 40% off regular admission prices, and have a choice of six different pass options.
...  More
From
US$90.88
From
US$90.88
Learn More

Things to do near Sydney