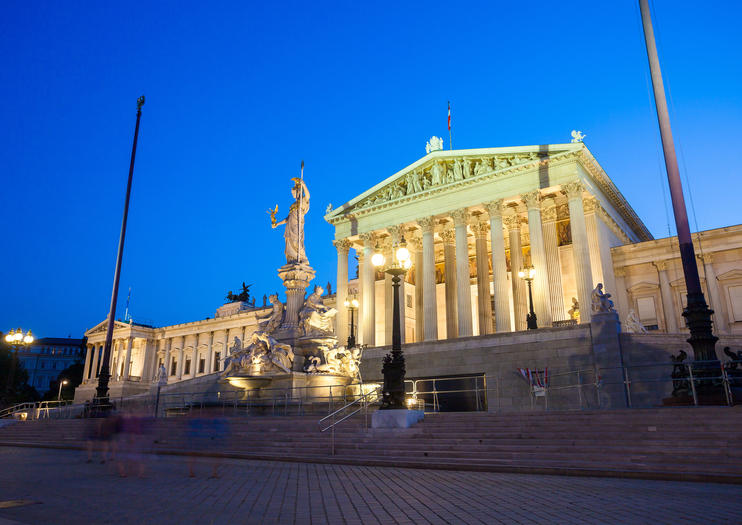 The Austrian Parliament Building, a Greek-revival style building completed in 1883, is where the two Houses of the Parliament of Austria conduct their sittings. It is located in Vienna’s city center, close to the Hofburg Imperial Palace and the Palace of Justice. Despite sustaining heavy damages during WWII, most of the building’s interior has been restored to its original impressive appearance.
The parliament building is one of the largest structures on the Ringstraße. It was originally built to house the two chambers of the Austro-Hungarian Empire’s Reichsrat (Austrian legislature). Today, it is the seat of both the Nationalrat (National Council) and the Bundesrat (Federal Council). The building contains over 100 rooms, including the chambers of the national and federal councils, the former imperial House of Representatives, committee rooms, libraries, lobbies, dining-rooms, bars, and gymnasiums. It is a working government building, and the site of state ceremonies – most notably the swearing-in ceremony of Austria’s president and the state speech given annually on National Day (October 26).

The Austrian parliament offers guided tours giving insights into day-to-day political work, historical details, and architectural features. The tours take about an hour, and are catered to different interests and age groups. Visitors wishing to access the parliament building on their own must have an appointment, and carry photo ID. Visitor Service staff is available for information and registration Monday – Friday from 9 a.m. – 3 p.m.
The visitor’s center is open for the public free of charge Monday – Saturday from 9:30 a.m – 4.30 p.m. The parliament building’s working hours are Monday – Friday from 6.30 a.m. – 7.00 p.m., and Saturdays from 9.00 a.m. – 5.00 p.m.
Address: Dr. Karl Renner-Ring 3, Vienna A-1017, Austria
Admission: Guided tour: €5,00; Children: Free
Read MoreShow Less

187
Cycle through the streets of Vienna on this bike and city tour. Led by a local guide, pedal past top attraction such as the Albertina, St. Stephen’s Cathedral, the Vienna State Opera, Stadtpark, and Heldenplatz. As you travel along bike paths and quieter streets, your guide will discuss the fascinating stories behind each landmark. Enjoy your choice of a morning, afternoon or evening departure.
...  More
From
US$43.55
From
US$43.55
Learn More

Navigate Vienna with a private guide on this half-day tour of the city. Tailor the tour to your interests, stopping at landmarks that appeal to your party and learning about them through guided commentary. Travel along the imperial boulevard, Ringstrasse, passing the opera house, the palace, and the upscale shopping street. This private tour is perfect for those short on time who want a city overview.
...  More
From
US$254.92
Price varies by group size
From
US$254.92
Price varies by group size
Learn More

Best of Vienna: Experience the top 100 sights your own way, your own pace

3
Download a guide of Vienna to your smartphone for completely independent, self-guided tours of Austria's capital. Move at your own pace through a variety of provided walking, tram, and bus tours that make use of Vienna's great public transportation system. Enjoy high-quality audio narration and offline mapping (saves data usage) of more than 100 points of interest throughout the city.
...  More
From
US$11.48
From
US$11.48
Learn More

Discover Vienna's city center with a scavenger hunt as a city tour! Start when you want and bring as many people as you like. Together, you puzzle your way through the Inner City and discover the magnificent buildings of Vienna and great places, at your own pace. From St. Stephen's Cathedral over the Hofburg to the Opera. Just take a break if you want, or have a look. For the tour we will send you a box. In this you will find the starting point of the tour. The enclosed envelopes contain the riddles and directions for the next station, as well as an information card with much to know about the respective attraction. IMPORTANT: Please choose an appointment so far in the future that we have time to send you the box. Write us your full address by e-mail at the end of the booking. The price for a box is including shipping! Shipping time in Germany: 2-3 working days / EU 3-5 working days
...  More
From
US$50.06
per group
From
US$50.06
per group
Learn More

4
Explore Austria’s beautiful capital city on this private 7-hour Vienna city tour with Schonbrunn Palace visit. Hop in your car and take the Ringstrasse past famous landmarks including the Opera House, Hofburg, Votive Church, Vienna's Rathaus (town hall) and Vienna University. Explore Vienna’s historic heart on foot and gain insight into centuries of heritage. Discover top attractions such as St Stephen’s Cathedral tucked away down winding alleys and ancient streets. Visit the Schönbrunn Palace and wander round the attractive gardens. Upgrade your tour to include lunch in a traditional Viennese restaurant.
...  More
From
US$516.46
per group
From
US$516.46
per group
Learn More

3
Enjoy a fun and family-friendly trip to Vienna with this comprehensive sightseeing package. Your combo ticket includes admission to the Schonbrunn Zoo and Madame Tussauds, as well as a ride on the iconic Ferris wheel at the Prater amusement park. You’ll also enjoy discounts to numerous attractions and restaurants with a 72-hour Vienna Card, and unlimited public transportation.
...  More
From
US$126.25
From
US$126.25
Learn More

29
Capture the Austrian capital through the lens of your camera on this vintage photo tour with a Polaroid camera. Follow your guide through the city streets and discover photogenic attractions such as St. Charles' Church, Vienna State Opera, City Hall, Votive Church, and Hofburg Palace. With your vintage Polaroid camera in hand, frame your shots and open the shutter. Listen as your guide shares handy tips and tricks to take the best shots, and perhaps see your old hobby in a new light.
...  More
From
US$64.75
From
US$64.75
Learn More

64
See the best of Vienna by bike and on foot with this package combining two popular tours. Begin your morning with a guided walking tour through the Austrian capital, passing sites like the Hofburg Palace, Heldenplatz, and St. Stephen’s Cathedral. Then continue your exploration in the afternoon by bike, following your guide around the famous Ringstrasse and to the Prater amusement park.
...  More
From
US$51.65
From
US$51.65
Learn More

2
Take your camera for a tour of Vienna and learn how to capture the city’s beauty through a lens. With a photography expert as your guide, you’ll stop by at St Stephen’s Cathedral, the Imperial Treasury, Butterfly House, Spanish Riding School, Austrian National Library, and other landmarks. It’s a great way to discover Vienna’s architecture and more-quirky sights, such as a large collection of weaponry and musical instruments.
...  More
From
US$176.57
Price varies by group size
From
US$176.57
Price varies by group size
Learn More

15
See the many landmarks of Vienna with ease on a 3-hour Segway tour. Your easy-to-ride mode of transport allows you to see Musikverein, Karlskirche, and much more without breaking a sweat. The comprehensive route is perfect for visitors who want to orient themselves to the Austrian capital for future exploring. As you cruise along, enjoy live commentary on the city’s history and many attractions.
...  More
From
US$90.67
From
US$90.67
Learn More

Whether as a team building event, bachelor party, birthday party, company outing program or simply because Vienna is "leiwand" and always worth exploring - we show that the city has many faces and is home to amazing events.
...  More
From
US$34.43
From
US$34.43
Learn More

1
Find out what makes the Austrian capital tick on this private Vienna city walking tour. Explore Vienna on foot and by tram with your private guide and discover top attractions including the rococo Schönbrunn Palace, home to the Habsburg dynasty. Take the tram along the Ringstrasse and admire Vienna State Opera, the National Theatre, City Hall and the Vienna Stock Exchange. Stop off half-way through for panoramic views over the mighty Danube River. Take in famous sites such as Sacher Café, the Albertina Museum, Capuchin Church and the bustling Kärtnerstraße.
...  More
From
US$525.29
Price varies by group size
From
US$525.29
Price varies by group size
Learn More

Take this tour with the award winning supplier for „The Private Tour Company of the Year“ and see the best of beautiful Vienna. You love cruises but you prefer to have your private guide during the day excursion just for your VIP group. We provide transportation for the whole time which is convenient if you can't walk that much and if the weather isn't so good either. We can cover all the major highlights in Vienna, inside visits you are most interested, everything at your pace. With our special car, we can also drive to most streets in the city center since this is not possible with a big bus. Vienna Highlights including the cathedral, the famous Ring Street with all its splendid Palaces. The winter palace Hofburg and the most visited sight Schönbrunn Palace with inside visits. We can also include the Belvedere Palace with the famous Klimt paintings and beside some contemporary archtitecture and art if desired. We can also add Jewish sights and adjust the tour to your personal needs.
...  More
From
US$906.67
per group
From
US$906.67
per group
Learn More

Things to do near Vienna