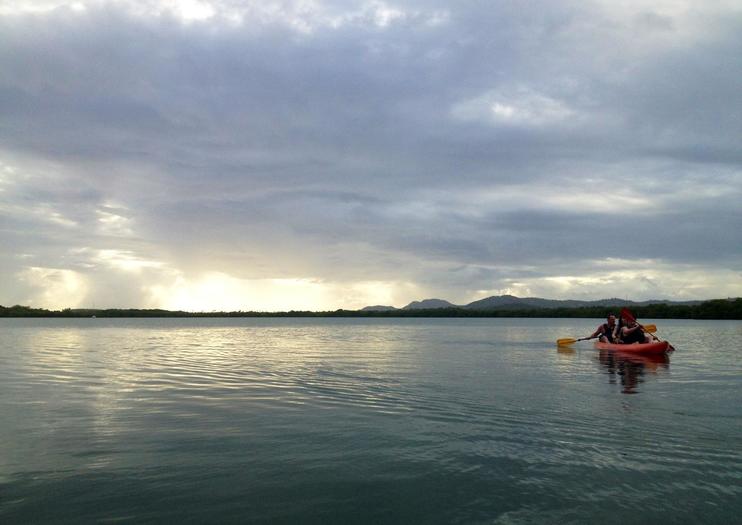 Bioluminescent Bay (aka Mosquito Bay or Puerto Mosquito) is one of Puerto Rico’s three bioluminescent bays, located on the island of Vieques. A popular destination for nighttime boat tours, this bay is by far the brightest. The water is illuminated by dinoflagellates called Pyrodinium bahamense, tiny microorganisms that glow when touched.
The Basics
Any contact with the water—by the boat, a paddle, or a part of the body—makes the water glow bright neon blue and green. Jump in for a neon-lit swim, cruise over the water in a pontoon boat, or board a kayak to paddle through the bay. Nighttime kayak tours typically allow you to learn about the biology of dinoflagellates and their interaction with the Vieques ecosystem.
Things to Know Before You Go
How to Get There
Mosquito Bay is located on the southern shore of Vieques, which can be reached by ferry from Fajardo on the main island of Puerto Rico. Reaching the bay is an adventure in itself that requires a 10-minute drive down a very bumpy and rutted 4WD track. Tours typically provide transportation to the bay from the town of Esperanza on Vieques Island.
When to Get There
The dinoflagellates in Bioluminescent Bay are active year-round but are best seen during the new moon, when the sky is darkest and the water glows brighter by comparison. Tours typically do not operate the day before, during, and after the full moon, when the organisms are difficult to see.
Must-See Vieques Attractions
Isla Vieques was under the control of the US Navy for 60 years and thus remains largely undeveloped. The small island is home to unspoiled rain forest dotted with pristine beaches and archaeological sites including the Hombre de Puerto Ferro, where skeletal remains up to 4,000 years old were discovered. Along with the famous bio bay, Vieques is host to some excellent snorkeling, especially at Blue Beach (Bahía de la Chiva).
Address: Vieques, Puerto Rico
Read MoreShow Less

66
Vieques Kayaks Bio Bay excursions are guided in clear bottom kayaks through the glowing waters of Mosquito Bay, located on the island of Vieques, Puerto Rico. Mosquito Bay is the brightest Bioluminescent Bay in the world! Our excursions depart nightly at 7pm and 9pm. We do not operate during full moon. Book now to paddle the GLOW with Vieques Kayaks Bio Bay excursions, where the Bio Bay is the star!
...  More
From
US$60.00
From
US$60.00
Learn More

73
Paddle through the waters of the BioBay, a luminescent bay outside of Vieques, on this nighttime kayaking tour. With provided kayaking equipment and instruction, simply follow your guide through the florescent waters and and learn about this natural phenomenon. Choose between an early or late evening tour; note that you must stay overnight on Vieques Island (not included).
...  More
From
US$56.99
From
US$56.99
Learn More

1
Our mission is to bring some attention towards the parts of Vieques that remain largely unseen by visitors. In a n effort to promote the island’s natural beauty we are offering a FREE Biobay tour with the purchase of The Adventure Package. This excursion includes Hiking, Snorkeling, and an authentic Puerto Rican meal from a local restaurant. In addition to promoting awareness about our conversational efforts we also want to educate the world of our local culture. We focus on taking small groups to ensure a more intimate experience but above all else we ensure a safe environment for which to enjoy our islands natural beauty!
...  More
From
US$200.00
From
US$200.00
Learn More

Things to do near Vieques