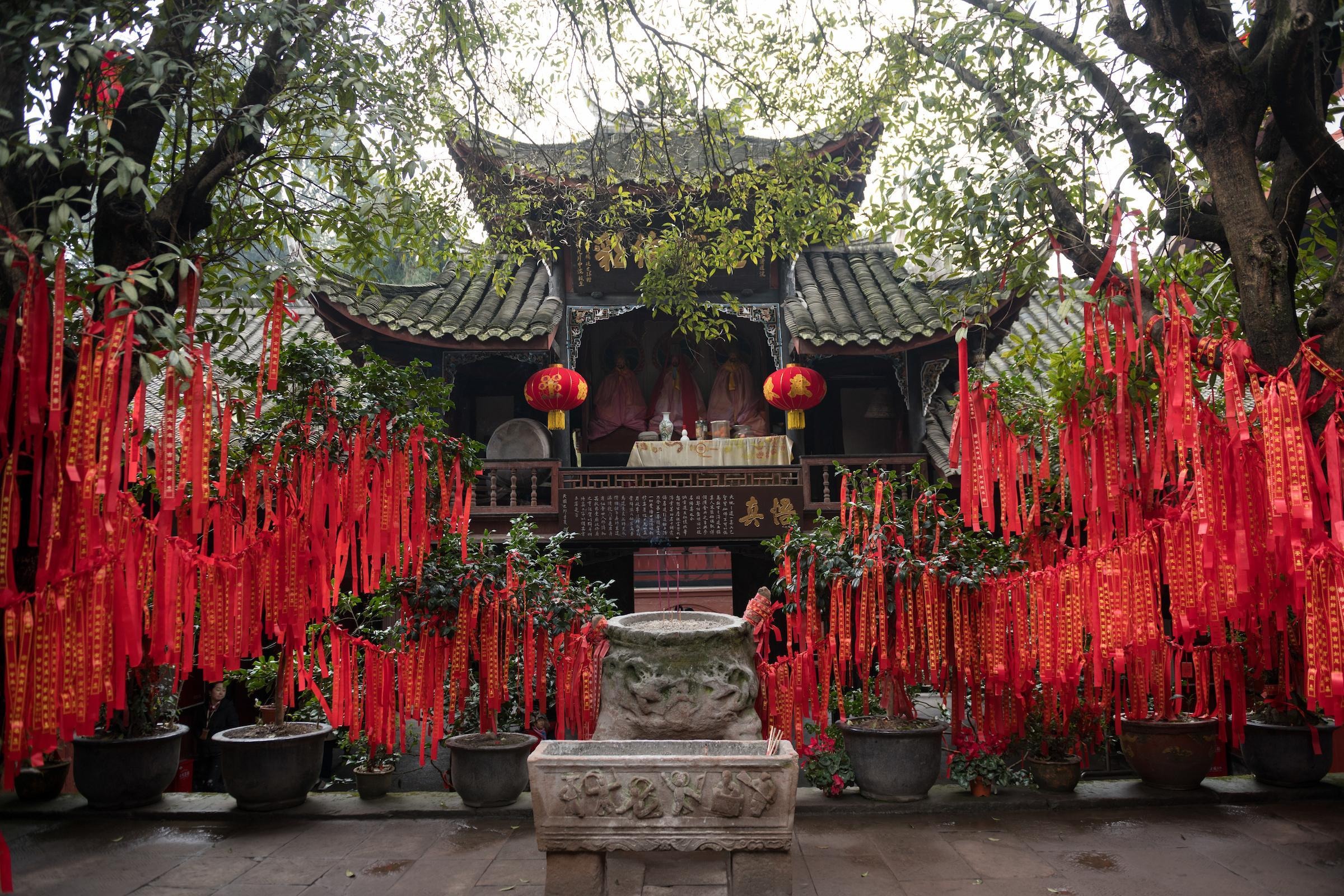 Despite Chengdu being a booming, ultra-modern city of over 11 million people, there are still corners of the city where it’s possible to take a stroll directly into Chengdu’s past. While sections of town still offer glimpses of traditional Sichuan architecture and work to preserve the city’s cultural past, the absolute best way to experience the feeling of old Chengdu is to tour inside of the temples which still lay scattered about town. As a city with thousands of years of history all resting in close proximity, here are the top Chengdu temples where visitors can gain an insight into the fascinating culture and history of Chengdu.

Beneath the “Peace Pagoda of A Thousand Buddhas,” visitors to Wenshu Temple can relax in the tea garden or marvel at the jade statue which was hand carried by a devout Buddhist monk all the way from Myanmar. Regarded as the best preserved Buddhist temple in the city, Wenshu is an oasis of calm among the chaotic pace of everyday commerce found just outside the temple walls.

Almost considered to be a pilgrimage for fans ofThe Romance of the Three Kingdoms novel, this entire complex is devoted to the volatile history of the Three Kingdoms period as well as Liu Bei and Zhuge Liang, historical figures regarded as two of the most respected and illustrious leaders in the lengthy history of ancient China. Impeccably landscaped and home to cultural relics such as the 12 foot (3.7 meter) high “Tablet of Triple Success,” the surroundings are peaceful enough and the content informative enough to warrant a visit regardless of your Thee Kingdoms knowledge.

Named as a palace yet unquestionably a temple, the Qingyang Palace is one of the most revered Taoist temples due to its location near the boyhood home of Lao Tzu. Also known as the “Green Ram Temple,” the “Green Ram” from which it derives its name is actually a bronze sculpture of a peculiar creature with bodily features from all 12 animals in the Chinese zodiac. One of the most popular temples in Chengdu, Qingyang Palace is another lovely spot for relaxing with a cup of tea or watching locals take part in a casual game of mahjong.

Also known as the Divine Light Temple, Baoguang is named for a moment when emperor Xizong of the Tang Dynasty is said to have witnessed the diving light emanating from the bottom of the temple. It’s mystifying history aside, this massive temple complex 11 miles (17.7 kilometers) outside of Chengdu also houses 16 courtyards and 577 sculptures, all of which display distinct postures and expressions and are unlike any found elsewhere in China.

Located north of the Chengdu city center, Zhaojue Temple boasts the largest Buddhist shrine found anywhere in Chengdu. This temple dates as far back as the 5th century, and previous temples on this same site were destroyed numerous times before the current version was eventually rebuilt during the Qing Dynasty. Zhaojue still maintains a monastery of over 200 Buddhist monks and is considered to be one of the model temples for which numerous Buddhist temples across Southeast Asia are constructed.

43
At over 230 feet tall (70 meters), the 1,300-year-old Leshan Giant Buddha is the largest Buddha in the world and attracts visitors from around the globe. Keep yourself from getting lost in the crowds of this UNESCO-listed attraction by visiting with the comfort and convenience of a private tour, which includes informative commentary, transportation from your hotel, and a side-trip to a local fishing village. This tour also includes all entrance fees, high-speed train tickets, and lunch.
…More
From
US$219.00
Price varies by group size
From
US$219.00
Price varies by group size

24
Discover the cultural and historical highlights of Chengdu on an enriching full-day tour of the spectacular city. On this private tour, venture to the Research Base of Giant Panda Breeding to spend several hours observing adorable pandas, and then absorb the sacred ambience of the Zen Buddhist monastery during a leisurely lunch. Sip refreshing tea at a traditional teahouse in the picturesque park, and then meander through the narrow alleys of Kuan and Zhai Lane for dinner. Upgrade to immerse yourself in the melodious magic of the Sichuan opera.
…More
From
US$147.00
Price varies by group size
From
US$147.00
Price varies by group size
Gear/equipment sanitised between use
Transportation vehicles regularly sanitised
Regular temperature checks for staff
Learn More
Taking safety measures

1
Keep your camera to hand as you visit two of Chengdu’s most photo-worthy sites on this full-day tour – the UNESCO-listed Grand Buddha in Leshan and the Chengdu Panda Base.  Start your day getting close to China’s adorable native pandas, with the chance to spot Giant Pandas, Red Pandas and baby pandas. After lunch at a local restaurant (included), make the most of your private guide as you explore the Great Buddha temple and stand in awe before the world’s largest stone Buddha.
…More
From
US$240.00
Price varies by group size
From
US$240.00
Price varies by group size

4
Get up close to Chinese wildlife and ancient culture on a full-day tour from Chengdu. You have the option to take a private tour or join up with a group. Regardless, you relax in comfortable round trip transportation from your hotel.  Entrance is included to both the Leshan Grand Buddha and Chengdu Panda Base, where you also enjoy engaging tours with your guide.
…More
From
US$95.00
Price varies by group size
From
US$95.00
Price varies by group size
Face masks required for travellers in public areas
Learn More
Taking safety measures

11
As China urbanizes and industrializes, traditional culture is fast being lost. See a side of Chengdu that’s rarely open to foreigners at an authentic old tea house in the suburb of Pengzhen with a private translator/guide. Next, spend the afternoon exploring the Leshan Giant Buddha UNESCO World Heritage Site. This door-to-door tour includes a cup of tea but excludes Buddha entrance fees, boat cruise fees, and lunch.
…More
From
US$133.34
Price varies by group size
From
US$133.34
Price varies by group size

4
Spend time outdoors and discover the highlights of Chengdu on this action-packed private bamboo bicycle tour. A bicycle tour will help you save time and cover more ground than a walking tour, and you won’t have to worry about getting lost as a guide will lead the way. Pedal past the Tibetan Quarter, the Jinjiang River, Sichuan University, Tianfu Square, People’s Park, Jinli Street, Wenshu Buddhist Temple, and much more.
…More
From
US$41.00
From
US$41.00

11
Enjoy an alternative sightseeing experience on a half-day bike tour of Chengdu, led by a knowledgeable local guide. Immerse yourself in the traditional culture of the city as you visit the favorite haunts of locals to see how they pursue daily leisure activities. Visit legendary landmarks like the Wenshu Temple and the Qingyang Palace and cycle between impressive monuments at a leisurely pace tailored to your ability. Gain fascinating insight into the rich heritage of Chengdu as you absorb its unique ambience on this energizing and enriching excursion.
…More
From
US$67.00
Price varies by group size
From
US$67.00
Price varies by group size

2
Spare yourself the hassles of negotiating Chengdu’s public transport system with this private guided door-to-door tour of the 233-foot (71-meter) Leshan Giant Buddha, a UNESCO World Heritage site. Traveling by bullet train and private vehicle, stroll around the mighty Buddha, then enjoy a traditional Sichuan lunch and a mahjong session in a teahouse.
…More
From
US$197.34
Price varies by group size
From
US$197.34
Price varies by group size

2
To perceive the history that underpins the modernity of vibrant Chengdu, it pays to have a guide. Enjoy a masterclass in Chinese culture from your personal host on this full-day door-to-door tour. See the Wuhou Memorial Temple, Jinli Ancient Street, the Taoist temple Qingyang Palace, and Du Fu Cottage, home to an 8th-century poet, and learn about the personalities that underpin it all. Please note: Tour excludes entrance fees.
…More
From
US$153.85
Price varies by group size
From
US$153.85
Price varies by group size
Face masks required for travellers in public areas
Face masks required for guides in public areas
Learn More
Taking safety measures

2
See giant pandas and the Giant Buddha of Leshan, and ride a bullet train on this private 12-hour trip from Chengdu. Visit the Chengdu Giant Panda Breeding Research Base to view these rare animals, and learn about the center’s conservation work. Plus, take a high-speed train to Leshan to see its immense 8th-century Buddha statue carved into a riverside cliff. Train tickets, entrance fees, private Chengdu round-trip transfers, and hotel pickup and drop-off included.
…More
From
US$173.00
Price varies by group size
From
US$173.00
Price varies by group size

Discover the best of Chengdu in a day by going on a comprehensive private day tour. You’ll avoid the stress of figuring out public transport by having a convenient hotel pickup and drop-off included. Enjoy a carefree day with a detailed itinerary planned out for you—you’ll see Qingyang Taoist Palace, Renmin Park, Wuhou Temple, and Jinli Ancient Street. Conveniently, entrance fees are included, so you’ll avoid time waiting in long visitor lines and can spend more time exploring.
…More
From
US$49.00
Price varies by group size
From
US$49.00
Price varies by group size

This 9-hour private tour allows you to visit the Leshan Giant Buddha and the UNESCO World Heritage-listed Mt. Emei Scenic Area. Get panoramic views from the sculpture's vantage point, then sit down for lunch in a local restaurant. This private tour ensures personalized attention from your guide and a flexible itinerary. Round-trip transportation from Chengdu accommodations is included.
…More
From
US$242.00
Price varies by group size
From
US$242.00
Price varies by group size

Private Day Trip: Chengdu to Leshan and Luocheng by Train

Combine visits to the village of Luocheng and the Leshan Grand Buddha during this full-day private tour from Chengdu. Travel with a dedicated guide via fast train to explore the ancient town, try local foods, and admire the world's largest ancient Buddha. Hotel pickup and drop-off in Chengdu, train tickets, and entrance fees included.
…More
From
US$299.00
Price varies by group size
From
US$299.00
Price varies by group size