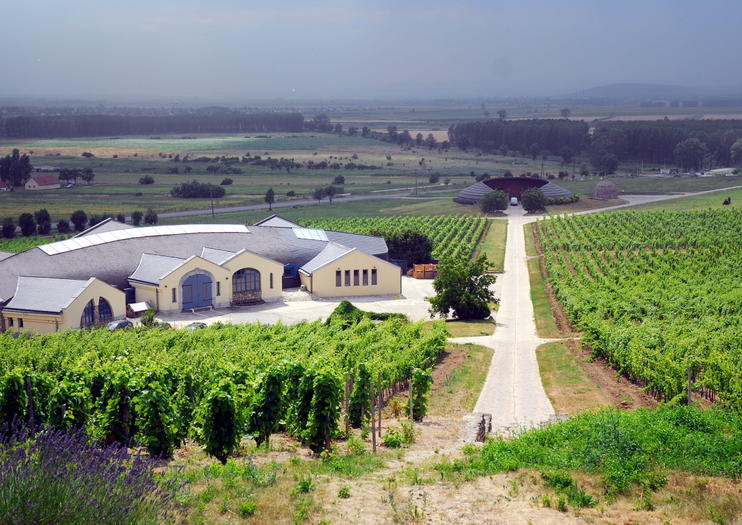 Tokaj is an historic town in northern Hungary, as well as the center of the Tokaj Wine Region Historic Cultural Region, a UNESCO World Heritage Site since 2002. The region is home to almost 600 wineries and is where the world renowned Tokaji wine is produced. The oldest classified wine region in Europe, vineyards were established here as early as the 12th century, although most wine cellars were built between the 16th and 17th centuries, including a vast system of cellars carved out of solid rock. The region produces only white wines, primarily sweet dessert wines.
The town of Tokaj stands at the confluence of the Tisza and Bodrog Rivers and dates back to the 14th century. Although it once belonged to Hungary’s royal family, it suffered during the world wars and lost its importance, only regaining town status in 1986.

To reach the town of Tokaj, take a train from Budapest’s Keleti station heading toward Nyiregyhaza. Tickets cost 10-12 Euros and the journey takes nearly three hours. Once in Tokaj, you can get around the town on foot and visit some nearby villages by train. To reach wineries in the region, try booking a wine ship tour along the Rivers Bodrog and Tisza or ordering a wine bus from the Tourinform office.
Address: Tokaj, Hungary
Read MoreShow Less

5 Tours and Activities to Experience Tokaj

Private trip to home of Tokaj Aszu, with winetasting and guide!

Discover Tokaj with a private guide! Tokaj wine region has been declared a UNESCO World Heritage Site in 2002. Embark on a day trip to this astonishing place and learn about the origins of Tokaji aszu, the world's oldest botrytized wine. Visit Mád and Bodrogkeresztur, the most famous places beside Tokaj in the region.
…More
From
US$292.12
Price varies by group size
From
US$292.12
Price varies by group size
Face masks provided for travellers
Hand sanitiser available to travellers and staff
Social distancing enforced throughout experience
Learn More
Taking safety measures

Would you like to experience the world famous and special wines of Tokaj? Then you are welcome to take a private tour to the home of Aszú, Szamorodni, Eszencia, the best natural sweet wine of the planet, which was the admired drink of kings, popes, tzars! Check out sweet and dry Tokaj wines on a day long private wine tasting tour of the Tokaj wine region from Budapest. Visit two wineries along with our private professional guide who will introduce you all the magic of this historical region.
…More
From
US$430.17
Price varies by group size
From
US$430.17
Price varies by group size
Face masks provided for travellers
Hand sanitiser available to travellers and staff
Regularly sanitised high-traffic areas
Learn More
Taking safety measures

Our tour is one of a kind as it shows 3 different wine regions with 3 different type of wine cellars and wines with 3 stops including Gyongyos, Eger and Tokaj. This way showing you the most of the countryside while tasting the best wines of Hungary. This private tour starts and concludes in Budapest with hotel pick up and drop off. Our first stop will be Gyongyos town at the foot of the Sár and Mátra mountains. It is the home to numerous food production plants, including milk production and sausage factories. It is also home to many vineyards on the slopes of the hills surrounding the town. Your host will talk about the different wines that you will taste as well as try some of his local food products. Our next stop will be the historic town of Eger with sightseeing and wine tasting On your third stop you will taste the sweet side of Hungary while travelling through the scenic countryside famous for its dessert wine, which now part of the UNESCO world heritage site.
…More
From
US$319.01
Price varies by group size
From
US$319.01
Price varies by group size
Social distancing enforced throughout experience
Regularly sanitised high-traffic areas
Gear/equipment sanitised between use
Learn More
Taking safety measures

3
Explore the sweet side of Hungarian wine on a private day trip from Budapest to Tokaj, a region prominent for its dessert wine. Led by expert guide, you’ll learn about the area’s wine production as you travel to three wineries, enjoying five to eight tastings at each. Learn about rock-cut cellars and the secret behind ‘noble rot’ mold. Then, enjoy a delicious 3-course Hungarian lunch at a local winery. You’ll conclude your trip with samplings of cured meat and cheese at the last winery before returning to Budapest.
…More
From
US$397.42
Price varies by group size
From
US$397.42
Price varies by group size
Face masks required for travellers in public areas
Face masks required for guides in public areas
Hand sanitiser available to travellers and staff
Learn More
Taking safety measures

From Budapest: In the footsteps of Hasidic communities

This unique, full-day tour follows in the footsteps of thriving Jewish communities living in the Hungarian country(side) during the olden days. The exploration will take you into the history, culture and relics of these once prosperous Jewish Orthodox and Hassid territories from Gyöngyös to Sátoraljaújhely in the stunning Hungarian countryside.
…More
From
US$483.63
Price varies by group size
From
US$483.63
Price varies by group size
Regularly sanitised high-traffic areas
Gear/equipment sanitised between use
Transportation vehicles regularly sanitised
Learn More
Taking safety measures

Things to do near Hungary