Welcome to Viator!
By creating an account, you agree to our Terms & Conditions and Privacy Policy.
We're creating your account. This may take a few seconds...
Account creation successful! Thank you.
Something went wrong. Please try again on the sign up page.
Questions? (888) 651-9785(888) 651-9785
When are you travelling?
Select Dates
Recommendations
All Recommendations
Turkish Food in Istanbul
Istanbul by Night
Gallipoli Tours from Istanbul
Whirling Dervishes
Turkish Baths in Istanbul
Top Historic Areas of Istanbul
Whirling Dervishes Shows in Istanbul
Price
US$0
US$500+
Duration
Time of Day
RatingClear
Specials 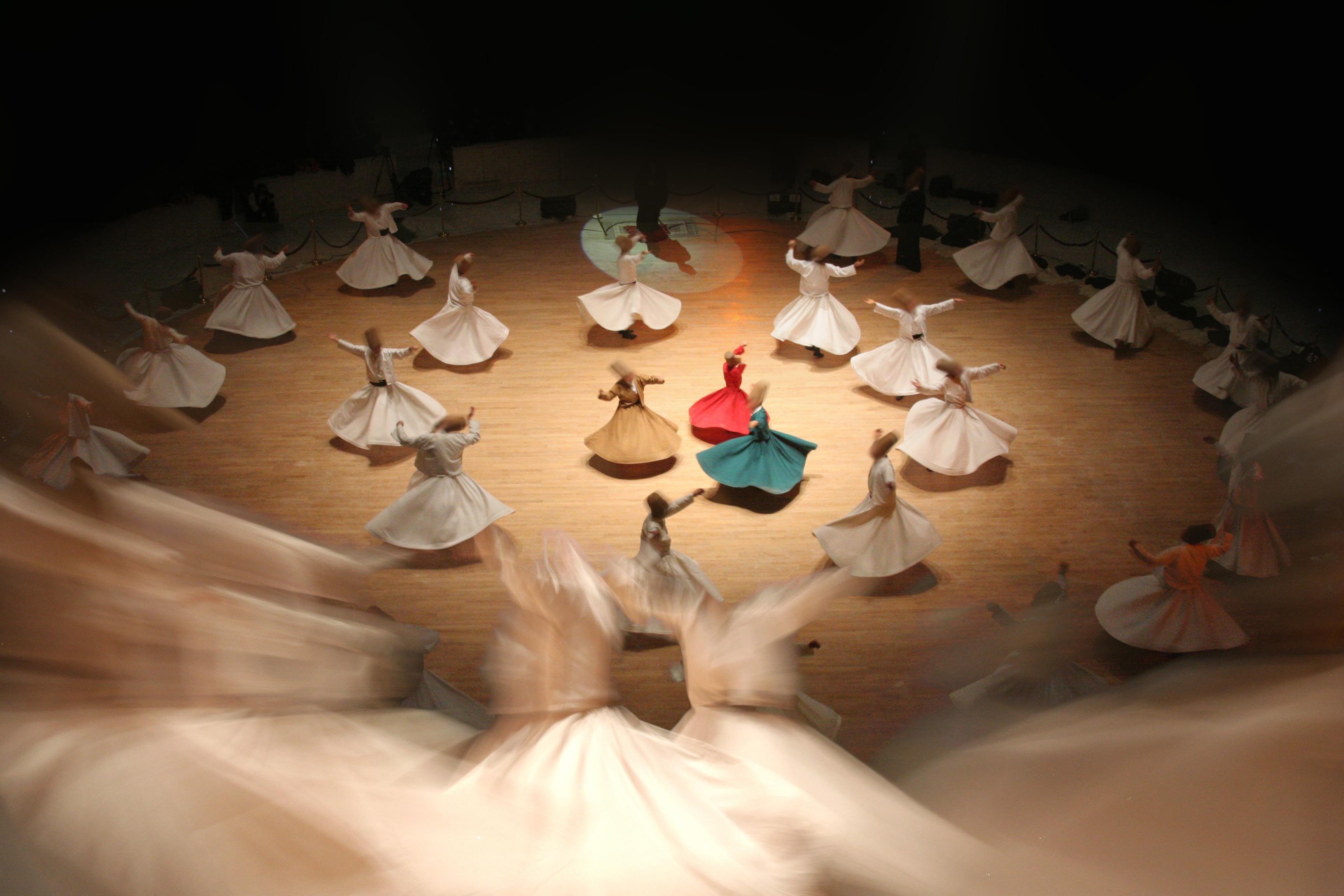 There are few sights as mesmerizing as Turkey’s inimitable whirling dervishes—troupes of performers from the Mevlevi order dressed in striking white robes, twirling in a meditative trance. Here’s where to see whirling dervish shows in Istanbul.

What is a Whirling Dervish?

Whirling dervishes are followers of the Mevlevi order and the teachings of Sufi mystic Rumi. The whirling dervish ceremony—also known as a sema ceremony—is a spiritual practice that dates back to the 10th century. The whirling dance serves as a dhikr, a prayer or meditation carried out in devotion and worship of God. The ancient rituals are so integral to Turkey’s spiritual history that they’ve been inscribed on UNESCO’s Intangible Heritage of Humanity list.

Watching a performance of the whirling dervishes can be both a moving and entertaining experience for visitors to Istanbul. It’s possible to see whirling dervishes perform in a number of venues in Istanbul, including some bars and restaurants, but one of the best places to attend an authentic mevlevi sema ceremony is at the Hodjapasha Cultural Center, where the captivating choreography is accompanied by Persian chanting, live music, and 360-degree video special effects.

For a taste of the Sufi whirling dervishes without attending a full show, opt for a scenic dinner cruise along the Bosphorus, with on-board entertainment. Admire the illuminated Istanbul skyline from the water as you glide along the Bosphorus Strait, tuck into delicious mezes and Turkish cuisine, and enjoy live entertainment including traditional Turkish dances and a whirling dance accompanied by traditional Sufi music.

7 Tours and Activities | All Istanbul Tours

134
Marvel at the mystique of whirling dervishes as they gracefully dance the ceremonial ‘sema’ Mevlevi at the emblematic Hodjapasha Dance Theater in Istanbul. Enjoy a cultural evening in Istanbul during this age-old performance of choreographed spiritual dancing accompanied by traditional music and Persian chanting. Before the show, set the mood with Turkish delight and a drink at the bar. Then, admire the dervishes as they elegantly twist and turn in their white flowing gowns.
…More
From
US$47.65
From
US$47.65
Face masks required for travellers in public areas
Face masks required for guides in public areas
Face masks provided for travellers
Learn More
Taking safety measures

106
Uncover the sacred practice of the mystical Sufis at an authentic Mevlevi Sema Ceremony held at Istanbul’s Hodjapasha, and witness the 800-year-old tradition that has been preserved on UNESCO’s list of Intangible Heritage of Humanity. Be mesmerized by the bizarre yet beautiful sight of the Whirling Dervishes as they perform their unique spiritual rituals during an hour-long show, including a live orchestra and 360-video projections.
…More
From
US$33.33
From
US$33.33
Face masks required for travellers in public areas
Face masks provided for travellers
Hand sanitiser available to travellers and staff
Learn More
Taking safety measures

29
Make the most of an evening in Istanbul with a sparkling 5-hour dinner cruise experience on the Bosphorus Strait. Admire spectacular views of Istanbul’s beautifully illuminated palaces, mosques and Bosphorus bridges, and enjoy a delicious 3-course dinner with select drinks. Glittering entertainment from belly dancers, whirling dervishes and other artistes is included, along with hotel pickup and drop-off. Upgrade to an unlimited alcoholic drinks package if you wish.
…More
From
US$41.69
From
US$41.69
Face masks required for travellers in public areas
Face masks required for guides in public areas
Hand sanitiser available to travellers and staff
Learn More
Taking safety measures

21
See the glittering lights along the Bosphorus Strait on a 3-hour cruise with dinner and a cultural show in Istanbul. Kick off the night with a welcome cocktail on deck, and enjoy panoramic views of the city skyline. Relax over Turkish appetizers and grilled entrees as belly dancers and folk dancers take the stage to the haunting sounds of traditional music. Sip a cup of Turkish coffee or a drink from the open bar, listen to music from a live DJ and soak up stunning nighttime views of Istanbul.
…More
From
US$40.00
From
US$40.00

28
Get a taste of Turkish culture and see the city from the water on this night time dinner cruise. Depart from your European-side hotel and sail down Istanbul’s Bosphorus Strait. Admire the views of Ottoman palaces and two transcontinental bridges. Enjoy a three-course dinner and watch a Turkish Night Show with belly dancing, folk dancing, a henna ceremony, and more.
…More
From
US$46.46
From
US$46.46
Face masks required for travellers in public areas
Face masks required for guides in public areas
Hand sanitiser available to travellers and staff
Learn More
Taking safety measures

5
Experience the majesty of Istanbul at night on an atmospheric 4-hour cruise along the iconic Bosphorus Strait. Gaze at panoramic vistas of the famous waterway as you gently cruise past glittering silhouettes of famous monuments like the Blue Mosque and Lender’s Tower. Pleasure your palate with a selection of Turkish specialties served onboard, feasting upon grilled meat and flavorsome mezze items. Indulge in unlimited onboard drinks as you become mesmerized by the enchanting moves of a Turkish belly dancer and a traditional folkloric show.
…More
From
US$47.65
From
US$47.65

Step into the rich world of Turkish culture and cuisine with a 4-hour dinner and show in Istanbul. Choose a sumptuous fixed menu or order a la carte, and sample classic dishes like meze, roasted chicken and meatballs along with cool drinks. Watch a series of performers take the stage, from whirling dervishes to belly dancers, and traditional folk dancers from around the country. See a re-enactment of a Turkish wedding ceremony, a fun DJ performance and a singer's renditions of international tunes.
…More
From
US$77.43
From
US$77.43