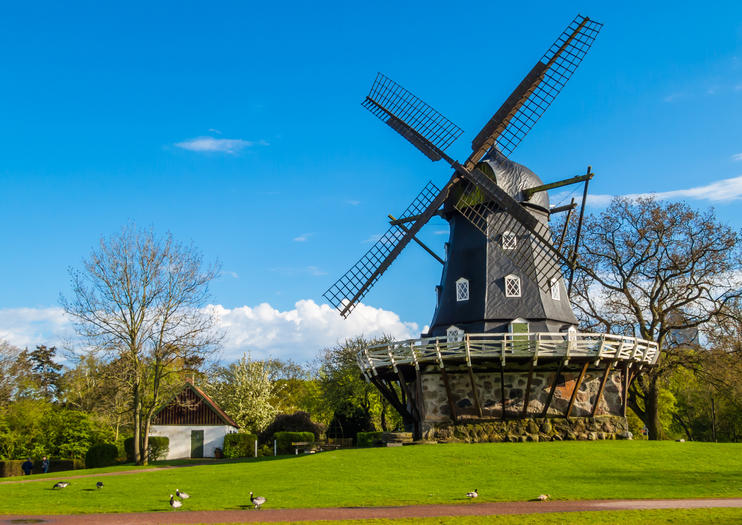 Since Oscar II established it in 1872, King's Park (Kungsparken) has been a favorite among Malmö locals. Covering more than 21 acres (8 hectares) in the center of the city, the park boasts 130 tree species—including a 95-foot (29-meter) Turkish oak and a 100-year-old chestnut tree—several ponds, and an artificial grotto.

The Basics
Guided tours of Malmö typically include a visit to the park alongside landmarks such as Turning Torso, the tallest building in Scandinavia, and Malmö Castle, which dates back to the 13th century; sightseeing options include walking, bike, and bus tours. You can also download an audio tour of the city and explore independently, or visit as part of a hop-on hop-off bus tour, which allows you to personalize your sightseeing itinerary.

How to Get There
King’s Park is located just west of Malmö’s Old Town, bordering Mariedalsvagen and Regementsgatan. Bus 24 runs along Regementsgatan and stops just outside the park. It is also a short walk (less than 15 minutes) from Malmö Central Station or the Malmö Gustav Adolfs torg bus stop.

When to Get There
The park is open 24 hours a day, every day. Spring and summer, when the trees are blooming and the weather is fine, is the best time to visit for a leisurely walk. Summer also brings free outdoor cultural events to the park, such as musical and theatrical performances, and circus shows.

Slottsparken
As it was developed on ground that was once home to the Malmöhus Castle fortifications, King’s Park was known as Castle Park (or Slottsparken) until 1881. Due to both this history and the close proximity of the two, separate parks, it is sometimes confused with the nearby Slottsparken, which was established in 1897.
Address: Slottsgatan 33, Malmö 21133, Sweden
Read MoreShow Less

13
Get a closer look at Malmö than possible on a tour bus and cover more distance than a walking tour on this guided bicycle trip. In a small group of no more than 10 people, explore Malmö like a local: on two wheels, pedaling along bicycle-friendly streets.  See some of Malmö's most famous landmarks, including St. Petri Church, the colorful Möllan area, and Malmö Castle, while your guide provides insight. Also ride down backstreets to explore some lesser-known parts of the city.
...  More
From
US$60.78
From
US$60.78
Learn More

4
Discover the city of Malmo in a fun and unique way during this self-guided tour. Use your smartphone to explore the city’s landmarks, go on a treasure hunt, and answer quiz questions to learn interesting facts about the history of Malmo. Walk through the old town, stroll through the city's parks, and admire the Swedish architecture of Malmo. This fun activity is great for first-time visitors and can be played on your own or with friends.
...  More
From
US$8.39
From
US$8.39
Learn More

Walk Malmö with an audio guide

1
Discover the Swedish town of Malmo during this 2-hour tour with an audio guide. Set out on a adventure to see the city’s landmarks like St. Peter’s Church, City Hall, Folkets Park, Malmohus, and the famous Oresund Bridge that connects Sweden and Denmark. Listen to commentary about the history of the city and interesting anecdotes as you stroll about in Sweden’s third biggest town. This tour is also available on site without charge.
...  More
From
US$6.04
From
US$6.04
Learn More

1
Discover the best of Malmo like a local on this 3-hour private bike tour. Visit the city’s key landmarks such as the Oresund Bridge that connects Malmo to Copenhagen, Kings Park, Malmo Castle, and more. Learn about the history of the city from your guide and listen to fun anecdotes as you cruise one of the most bikable towns in Sweden.
...  More
From
US$192.65
Price varies by group size
From
US$192.65
Price varies by group size
Learn More

1
The best way to see a new city is through the eyes of a local. This tour provides a local's insight into Malmö while traveling in the way favored by locals: On a bicycle. In the company of just your party and a guide, pedal through the streets of Malmö while listening to fascinating stories about the city's history and modern life. See all the major attractions—including Turning Torso, the Öresund Bridge, Malmö City Hall, and the colorful Möllan area—as well as some off-the-beaten-track gems.
...  More
From
US$183.48
Price varies by group size
From
US$183.48
Price varies by group size
Learn More

Cycle Malmö with an audio guide

Discover the Swedish town of Malmo during this 2-hour tour with an audio guide. Set out on a cycling adventure to see the city’s landmarks like St. Peter’s Church, City Hall, Folkets Park, Malmohus, and the famous Oresund Bridge that connects Sweden and Denmark. Listen to commentary about the history of the city and interesting anecdotes as you cruise around one of Sweden’s most bikeable cities. This tour is self-guided using an app on your smart phone. It is available free of charge on site for those with their own bikes.
...  More
From
US$20.08
From
US$20.08
Learn More

Things to do near Malmö