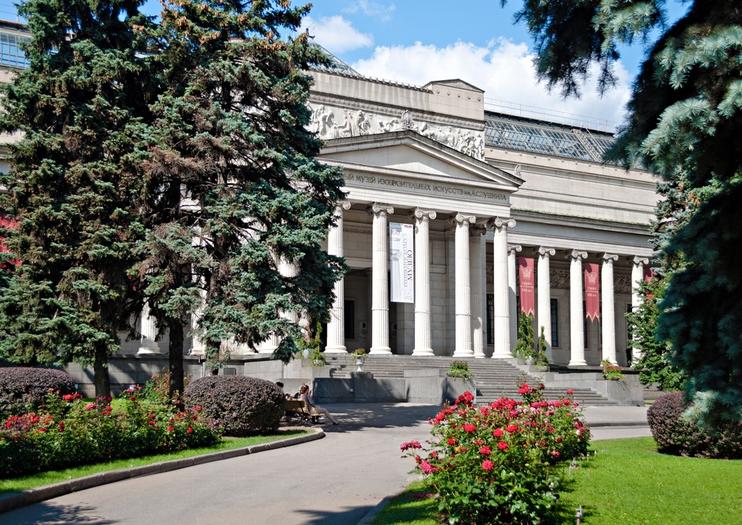 The Pushkin Museum (Pushkin State Museum of Fine Arts) is the largest European art museum in Moscow, with over 560,000 works of art. Opened in 1912, it actually has no connection to Alexander Pushkin, the famous Russian poet – it was simply renamed in his honor in 1937 to mark the centenary of his death.

The museum includes an impressive collection of Dutch and Flemish masterpieces from the 17th century, including several works by Rembrandt, as well as Impressionist and Post-Impressionist works by painters such as Van Gogh, Matisse, Gauguin and Picasso. The latter are now housed in a new Gallery of European & American Art of the 19th and 20th centuries next door to the main museum building. Many of the museum’s paintings were obtained in the 1920s and 1930s when private estates were nationalized; other works were taken from the History Museum, the Kremlin Museum, the Hermitage and other museums in St Petersburg.

The Pushkin Museum is also home to an Ancient Civilizations exhibit featuring ancient Egyptian artifacts and a Treasures of Troy collection that includes pieces dating back to 2500 BC.

The Pushkin Museum is located at 14 Volkhonka street, across the street from the Cathedral of Christ the Saviour. The nearest Metro station is Kropotkinskaya. Audioguides are available.
Address: 14, Volkhonka Street, Moscow 119019, Russia
Hours: Closed: Monday Tuesday - Wednesday and Friday - Sunday: 10am - 7pm Thursday: 10am - 9pm
Admission: Adults: 400 rubles (about $13) and Students: 200 rubles
Read MoreShow Less

20
Save time and money and skip the lines at Moscow's best attractions with a Moscow CityPass. Valid for one, two, three, or five days, the pass offers you free entrance to 40 attractions throughout the Russian capital, including the Kremlin, State Historical Museum, and Museum of Soviet Arcade Machines, as well as tours by boat, bus, or foot. Explore Moscow at your own pace and to your own interests. Includes a guidebook and map.
…More
From
US$74.34
From
US$74.34
Face masks required for travellers in public areas
Regularly sanitised high-traffic areas
Gear/equipment sanitised between use
Learn More
Taking safety measures

175
Discover the best of Moscow in your own way on a double-decker, hop-on hop-off City Sightseeing bus. Choose between a 2- or 3-day ticket and view the city’s incredible landmarks from aboard the open-top bus as you listen to the informative audio commentary. Either stay aboard to enjoy panoramic views of top Moscow attractions such as Red Square and the Cathedral of Christ the Savior, or hop on and off as you wish at any of the stops around the city, including at the Pushkin Fine Arts Museum and Alexander Garden. Upgrade to include a boat tour of Moscow.
…More
From
US$22.32
From
US$22.32
Hand sanitiser available to travellers and staff
Social distancing enforced throughout experience
Regularly sanitised high-traffic areas
Learn More
Taking safety measures

The Pushkin State Museum of Fine Arts is Moscow’s premier foreign-art museum, showing off a broad selection of European works, mostly appropriated from private collections after the revolution. The exposition of the Museum includes today a vast collection of tinted plaster casts of famous ancient, medieval and Renaissance sculptures and a collection of original works of foreign artists, sculptors and graphics together with objects of decorative arts. The museum's greatest treasures are to be found in its collection of European art from 1600, particularly the perennially popular and vastly comprehensive collection of French impressionists and post-impressionists, which comes close to that of the Musee d'Orsay in scope. • Guaranteed skip-the-line entrance
…More
From
US$293.00
Price varies by group size
From
US$293.00
Price varies by group size
Face masks required for travellers in public areas
Face masks required for guides in public areas
Face masks provided for travellers
Learn More
Taking safety measures

Unique tour of the cultural center of Moscow. The itinerary is built to show you the places where the most famous Russian poets and novelists of the past lived, worked and relaxed. You will hear every astonishing detail about the lives of Pushkin, Gogol, Mayakovski, Chekhov, Gorky, Turgenev and Tolstoy. Burned volumes, unrequited love, tragic death, repressions. You’ll know what are the Silver and the Golden ages of the Russian literature.
…More
From
US$127.08
From
US$127.08

It is a pedestrian tour across the center of Moscow. You will throw a coin and make a wish at the Zero Kilometer, enjoy the architectural diversity of the city and see all the climatic zones of Russia in one park. You’ll get to know: • How a small village on the edge of the world became the capital of the country; • About a cemetery inside the main country’s fortress’ wall; • How a temple was transformed into a swimming pool; • About the unique clock mechanism which stays functional for 150 years; • How the biggest hotel in Europe became a beautiful park; • How come Moscow is called 5 seas bay if there’s just one river?
…More
From
US$127.08
From
US$127.08

Skip the predictability of the standard guided tours by exploring Moscow like a local on this private walking tour that is customized for a unique experience. Go off the beaten path to gems missed by most tourists, such as the elegant Pashkov House, and indulge in included coffee and dessert.
…More
From
US$85.00
From
US$85.00
Face masks required for travellers in public areas
Face masks required for guides in public areas
Hand sanitiser available to travellers and staff
Learn More
Taking safety measures

4
Moscow is the thriving business capital of Russia and attracts a huge number of business visitors for all sorts of events. We understand that you are short of time but want to see the best of the city. That is the tour you are looking for - just 2-3 hours in the evening and you can proudly tell your family & friends you saw the best of the Russian capital!..
…More
From
US$53.40
Price varies by group size
From
US$53.40
Price varies by group size

1
This is a tour for those who would like to see the city through the eyes of locals. Stroll along the famous pedestrian Arbat street. Pass on the Gogol Boulevard and the next to the Pushkin Museum of Fine Arts. See the famous Cathedral of Christ the Saviour and explore one of the most popular places among the locals - Gorkiy Park.
…More
From
US$80.00
Price varies by group size
From
US$80.00
Price varies by group size

Moscow through the eyes of locals

1
Explore the non-standard places that only locals know about. Together with our guide you will plunge into the real atmosphere of the Russian capital and feel the true spirit of Moscow life! You will discover such famous and beautiful places as Old Arbat street, the Pushkin State Museum of Fine Arts, Cathedral of Christ the Savior, Gorky Park, Monument to Peter the Great and many other things.
…More
From
US$70.00
Price varies by group size
From
US$70.00
Price varies by group size

2
If you have just arrived in Moscow and are not sure where to begin, join this small-group walking tour. Visit such top attractions as Red Square and the Kremlin Walls and also go off the beaten track to some hidden sights that are missed by many visitors. There's also time for complimentary coffee and sweets.
…More
From
US$39.00
From
US$39.00

Welcome to the tour of Impressionist and Post-Impressionist works of the collection of the State Museum of Fine Arts in Moscow. The museum has a really remarkable collection of paintings from late XIX to early XX century France. It is very beautiful and choiceful and comes from two private collections – those of Shchukin and Morozov, two Russian businessmen and art lovers. Shchukin acquired his first Monet in 1897 in Paris. His friend Matisse visited him in Moscow to arrange his canvases in Shchukin’s mansion. Morozov collected Picasso, Cezanne, van Gogh. ‘Les Nabis’ artists helped to decorate his music room. Monet’s ‘Rouen Cathedral at Sunset’ is one of the many Impressionists and Post-Impressionists works that make the collection of  State Museum of Fine Arts in Moscow one of the world’s best. During this tour you will be introduced to the most famous and valuable paintings, including the works of Monet, Renoire, Cezanne, Gauguin and van Gogh, Matisse, Picasso.
…More
From
US$150.00
Price varies by group size
From
US$150.00
Price varies by group size

Things to do near Moscow