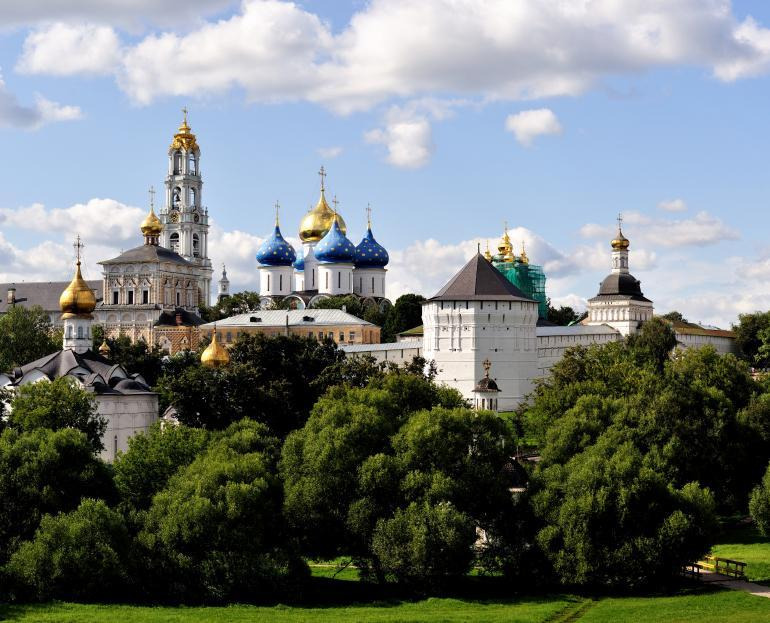 The picturesque town of Sergiev Posad grew out of one of Russia's greatest monasteries, the Trinity Lavra Monastery. It makes for a great day trip from Moscow and can also be combined with visits to other Golden Ring towns as part of a multi-day tour. Here are your options.

Join a small-group tour for the drive from Moscow to Sergiev Posad, where you’ll learn about the spiritual and historical importance of the 14th-century town while seeing sights like the Trinity Lavra Monastery (also known as the Troitse-Sergiev Monastery), the Trinity Cathedral, and the Assumption Cathedral. You’ll save money with a group tour and meet other travelers from around the world. If you have a few more days, join a multi-day group tour that also visits other Golden Ring towns such as Suzdal, Vladimir and Rostov-Veliky.

Join a private guide to take the train or bus from Moscow to Sergiev Posad to tour the Trinity Lavra Monastery, a UNESCO World Heritage Site. With a flexible itinerary, you might also see traditional matryoshka dolls at the Toy Museum, visit the Abramtsevo artists’ estate, or stop for a traditional lunch of Russian cuisine and dishes such as blini, solyanka, Olivier salad, or pirozhki. Other private tour options travel by car rather than bus and might include a matryoshka painting class or candle-making lesson.

9 Tours and Activities | All Moscow Tours

Day Trip to Suzdal and Vladimir with traditional Russian lunch

5
See the highlights of Suzdal and Vladimir, two of Russia’s Golden Ring cities, without getting lost on this day trip from Moscow, a tour with special appeal for first-time visitors. Learn about the history of medieval Russia and visit UNESCO-listed monuments and historical attractions such as the Cathedral of Saint Demetrius and the Suzdal Kremlin. Your tour includes hotel pickup and drop-off.
…More
From
US$403.00
Price varies by group size
From
US$403.00
Price varies by group size
Face masks required for travellers in public areas
Face masks required for guides in public areas
Hand sanitiser available to travellers and staff
Learn More
Taking safety measures

10
Get out of Moscow and into the surrounding countryside without the hassle of figuring out public transport or traveling in a large group. This private guided tour is exclusively for your party and takes you to the Golden Ring town of Sergiev Posad, with visits to the Trinity Lavra of St. Sergius and Chernigov Skete monasteries, as well as a matryoshka doll-painting class.
…More
From
US$333.21
per group
From
US$333.21
per group

6
Art and culture enthusiasts will enjoy this day tour on the Golden Ring, from Moscow. You’ll visit a number of places that are important in the history, culture, arts, and literature of Russia. Try your hand at some traditional arts and crafts, enjoy a walking tour, sample Russian food, experience an Orthodox church service, and more. This tour packs a variety of interesting experiences into a single day.
…More
From
US$168.85
Price varies by group size
From
US$168.85
Price varies by group size

5
Skip the hassle of renting a car or navigating public transportation and visit Sergiev Posad and the centuries-old Troitse-Sergiev Monastery on this stress-free day trip from Moscow. Enjoy easy transportation by coach and explore the spiritual center of the Russian Orthodox Church with a guide. Learn about the history of the monastery and see the whitewashed cathedral with its gold and star-studded blue onion domes.
…More
From
US$274.67
From
US$274.67

4
Immerse yourself in the sacred atmosphere of one of Moscow’s most famous monasteries on a private full-day trip to the Sergiev Posad from Moscow. Relax during the scenic 2-hour drive to the UNESCO-listed monastery and receive an interesting introduction to the structure from your expert guide. Admire prominent sites like the Dormition Cathedral, the Holy Gates and the Godunov Burial Vault as you take a comprehensive tour of the world-famous landmark. Lunch and round-trip transportation from your Moscow hotel is included in this tour.
…More
From
US$239.52
Price varies by group size
From
US$239.52
Price varies by group size
Face masks required for travellers in public areas
Face masks required for guides in public areas
Hand sanitiser available to travellers and staff
Learn More
Taking safety measures

6
Explore history-steeped Sergiev Posad on this private day trip from Moscow. Ride a train or bus to the ‘Golden Ring’ town, a group of once-powerful towns, and admire its wooden architecture, churches, and museums. Tour the showpiece UNESCO-listed Trinity Lavra monastery with its gold- and onion-domed cathedrals, monks, and museums; and visit Sergiev's Toy Museum, seeing its 'matryoshka' (Russian nesting dolls). Break for some 'kvas' (rye bread brew) and tasty local bread during your explorations.
…More
From
US$197.00
per group
From
US$197.00
per group
Face masks required for travellers in public areas
Face masks required for guides in public areas
Hand sanitiser available to travellers and staff
Learn More
Taking safety measures

Discover the opulent delights of Russia’s Golden Ring on a 4-day tour from Moscow. With a knowledgeable guide, visit a spectacular array of gold-topped cathedrals, ancient city walls and quaint architecture as you explore UNESCO World Heritage-listed sites like Assumption Cathedral and Suzdal’s Kremlin. Luxuriate in overnight accommodation in three Golden Ring towns and enjoy a pleasant balance of independent exploration and guided tours.
…More
From
US$1,927.46
Price varies by group size
From
US$1,927.46
Price varies by group size