Welcome to Viator!
By creating an account, you agree to our Terms & Conditions and Privacy Policy.
We're creating your account. This may take a few seconds...
Account creation successful! Thank you.
Something went wrong. Please try again on the sign up page.
Questions? (888) 651-9785(888) 651-9785
When are you travelling?
Select Dates
Recommendations
All Recommendations
Ways to Beat the Crowds in Munich
Culture Lover’s Guide to Munich
Sightseeing on a Budget in Munich
Art Lover’s Guide to Munich
Where to Find the Best Views in Munich
Top Day Trips from Munich
Don't Miss These Must-Do Activities in Munich
How to Spend 3 Days in Munich
Price
US$0
US$500+
Duration
Time of Day
RatingClear
Specials

How to Spend 3 Days in Munich 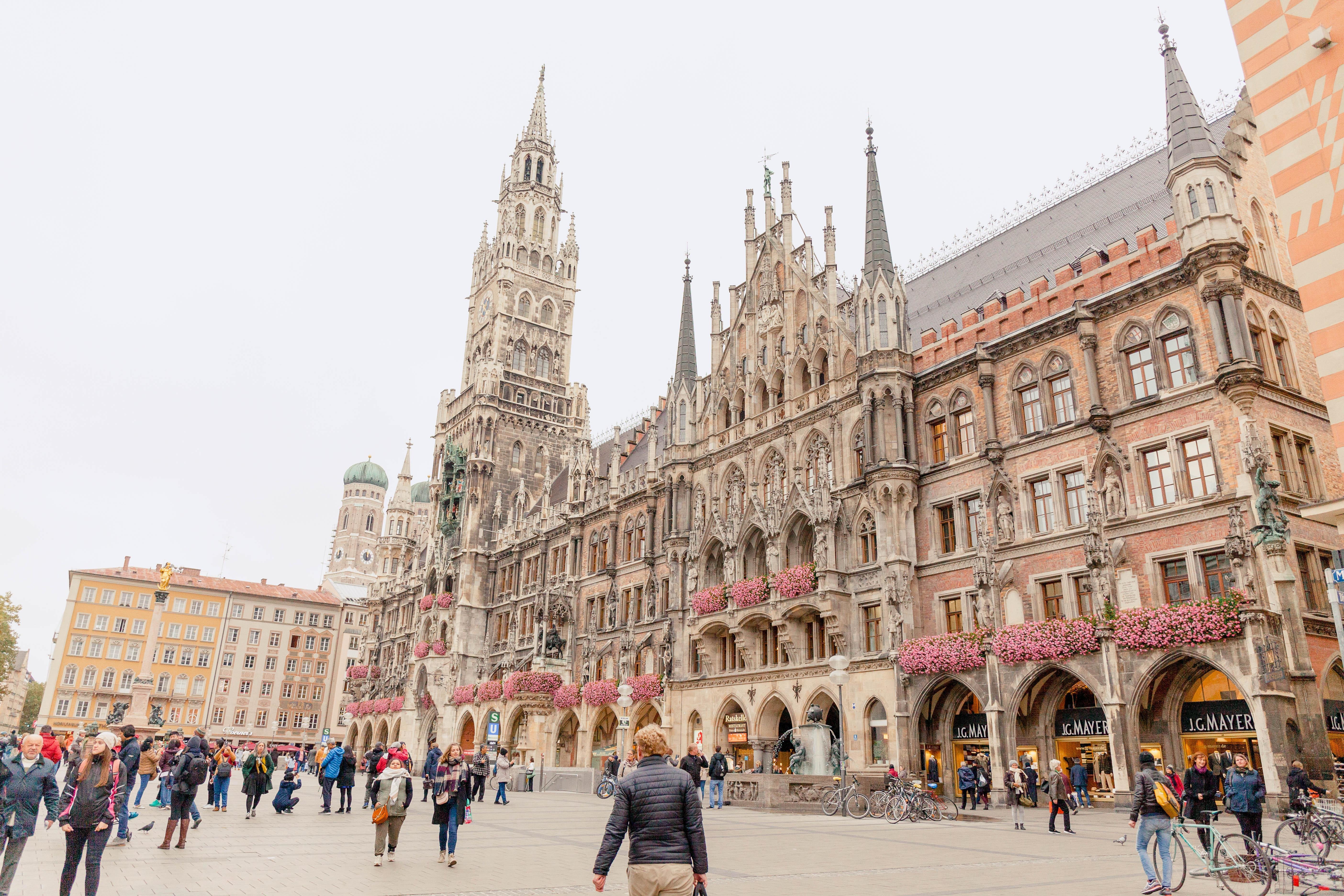 Three days in Munich gives you time to discover the city’s beer, food, art, nightlife, architecture, and palaces; marvel at the fairy-tale castle that inspired Disney; and even squeeze in a day trip. And if you’re visiting over Oktoberfest or the Christmas period, that’s even better. Read on to find out more.

Start your first day with a thorough orientation of the Bavarian capital. Soak up sights such as the Cathedral of Our Blessed Lady (Frauenkirche), the Munich Residence palace, and Marienplatz, fortifying yourself with coffee and cake en route. If the weather’s friendly, enjoy lunch in the English Garden park. Next, discover the city’s world-class art scene. See old masters at the Old Pinakothek, 19th-century and impressionist stars at the New Pinakothek, and modern works at the Modern Pinakothek. Wrap up the day with the city’s signature experience, a night in a historic beer hall with dirndls, an oompah band, gallons of beer, and hearty Bavarian fare such as pork knuckle.

Start your second day, perhaps, with Bavaria’s signature breakfast: weisswurst, the white sausage that’s only eaten before noon. Then head out to Mad King Ludwig’s Neuschwanstein Castle for a tour of its magical turrets, chambers, and halls. Then return to Munich and explore its signature regal sights: the extravagant Munich Residence, where Bavaria’s rulers sat in state for centuries, and Nymphenburg Palace with its opulent gardens. Alternatively, continue your countryside adventure with a trip to majestic Hohenschwangau Castle, where Ludwig grew up, or Linderhof Palace, Ludwig’s answer to Versailles. Come evening, discover wealthy Munich’s more sophisticated side over cocktails and light bites in a high-end bar.

Your third day in Munich is a great opportunity to discover the city’s dark past. Start with a walking tour of the city’s many Nazi-era landmarks, learning about key points on Hitler’s rise to power. Then catch the train a little way out of the city to the Dachau Concentration Camp Memorial Site, where the first of the Third Reich concentration camps opened in 1933. Alternatively, if World War II history is too dark for you, feast on beauty with a day trip to Germany’s highest mountain, the Zugspitze; the beautiful Austrian city of Salzburg; or along south Germany’s dazzling Romantic Road. For your last evening, delve deeper into Munich’s international present. Feast at one of the city’s excellent Afghan restaurants, then don your glad rags and party till dawn at your pick of its high-class, high-energy clubs.

14 Tours and Activities | All Munich Tours

636
Add a bit of legend and enchantment to your German vacation with a full-day trip to Neuschwanstein and Linderhof from Munich. Relax for the scenic coach ride through the Bavarian Alps, then spend hours exploring the former royal residences, sources of inspiration for modern fairy tales like Walt Disney's Sleeping Beauty. In your small group, tour the castle’s opulent halls, unique spaces and the incredible kitchens. Conclude with free time in the charming village of Oberammergau.
…More
From
US$174.21
From
US$174.21
Face masks required for travellers in public areas
Face masks required for guides in public areas
Face masks provided for travellers
Learn More
Taking safety measures

2284
Travel from Munich to Bavaria’s Neuschwanstein Castle on this day trip that includes round-trip transportation by train. Often known as Germany’s "Cinderella castle," Neuschwanstein was actually the inspiration for a different Disney story, the ‘Sleeping Beauty’ castle at Disneyland. Take a guided tour of the castle, and hear stories about the "Mad" King Ludwig II, who commissioned it. The entrance fee is not included, but skip-the-line access is, so you won’t wait in the main admission queue.
…More
From
US$65.18
From
US$65.18
Hand sanitiser available to travellers and staff
Social distancing enforced throughout experience
Regularly sanitised high-traffic areas
Learn More
Taking safety measures

1665
Discover elegant Salzburg—historic birthplace of Wolfgang Amadeus Mozart—on a day trip from Munich. Relax on the comfortable train ride to Salzburg, take a guided tour of city attractions like Domkirche Cathedral and the Festung Hohensalzburg fortress, then enjoy hours of independent time to explore. Soak up Austrian history, sample local delicacies, and snap photos of the city set against the striking backdrop of the Alps.
…More
From
US$65.18
From
US$65.18
Hand sanitiser available to travellers and staff
Social distancing enforced throughout experience
Regularly sanitised high-traffic areas
Learn More
Taking safety measures

649
Admire the countryside, castles, and villages of Germany’s Romantic Road on a day trip from Munich. Enjoy a coach drive along the iconic Road, a famously picturesque route through Bavaria’s mountains and forests. Stop at 11th-century Harburg Castle, one of Germany’s oldest fortifications, and continue to Rothenburg, a beautifully preserved medieval town of cobbled lanes, squares, and half-timbered houses. See top attractions such as the Renaissance-era Town Hall, enjoy free time to wander, have lunch (own expense), and more.
…More
From
US$65.18
From
US$65.18
Face masks required for travellers in public areas
Face masks required for guides in public areas
Face masks provided for travellers
Learn More
Taking safety measures

799
Get a dose of Bavaria's iconic beer culture with this food and beer tour in Munich. Home of Oktoberfest and a collection of famous beer halls and beer gardens, Bavaria's beautiful capital invites visitors from around the globe with its promise of fun and camaraderie. Partner with a savvy guide for an insider look at this tradition of imbibing. You’ll hit local haunts and enjoy Bavarian nibbles in the company of fellow beer aficionados.
…More
From
US$50.96
From
US$50.96
Hand sanitiser available to travellers and staff
Social distancing enforced throughout experience
Regularly sanitised high-traffic areas
Learn More
Taking safety measures

705
Visit the Eagle’s Nest in Berchtesgaden, Adolf Hitler’s famous mountaintop retreat, on this day trip from Munich. Travel by air-conditioned coach through Bavaria’s lush mountainscapes, and ride a bus and elevator to the lodge, 6,148 feet (1,834 meters) up Mt. Kehlstein. See where Hitler entertained dignitaries, view the hall where weddings and conferences were staged, and explore the terrace to admire the spectacular Alpine views—vistas that Hitler, ironically, found challenging due to his vertigo. Enjoy time for lunch (own expense) and the option to visit the Nazi Documentation Center Museum.
…More
From
US$65.18
From
US$65.18
Face masks required for travellers in public areas
Face masks required for guides in public areas
Face masks provided for travellers
Learn More
Taking safety measures

983
Get acquainted with Munich the easy way on a fun, flexible hop-on hop-off city bus tour. Choose a 24-hour Express Tour to check out Munich’s main highlights or a 24-hour or 48-hour Grand Tour ticket to widen your sightseeing net. Either way, settle aboard an open-top double-decker bus, listen to the enlightening onboard commentary, and enjoy panoramic views of sites such as the Marienplatz, Hofbrauhaus, Viktualienmarkt and more. Hop off at the stops that interest you, explore on foot and then re-board the bus at any stop you wish.
…More
From
US$22.52
From
US$22.52
Face masks required for travellers in public areas
Face masks required for guides in public areas
Face masks provided for travellers
Learn More
Taking safety measures

32
Forget about fighting traffic and looking for a parking spot at the Munich Airport. Skip all the headaches associated with getting to the airport and travel with confidence by scheduling a private vehicle for up to six people. Then sit back and relax as a professional chauffeur drives from any downtown Munich hotel to catch all the Munich Airport departures 24/7.
…More
From
US$197.52
per group
From
US$197.52
per group

75
Discover Nuremberg’s rich and storied past on a full-day bus and walking tour from Munich. Relax on the comfortable ride to Nuremberg, then take a guided tour of the city, famous as the epicenter of the Nazi propaganda campaign. See attractions like Congress Hall and historic old town, and learn about the birth of the Third Reich empire. Afterward, enjoy some free time to explore, sample local foods and snap souvenir photos.
…More
From
US$65.18
From
US$65.18
Face masks required for travellers in public areas
Face masks required for guides in public areas
Face masks provided for travellers
Learn More
Taking safety measures

60
Enjoy Oktoberfest in Munich during this full-day experience that includes a Munich city tour and a guaranteed spot inside a tent. Beginning with a walking tour, learn about the city’s history and brewing customs, and hear about the 200-year-old festival at Theresienwiese. Then, take a seat at your reserved place in one of the major Oktoberfest beer tents, where you receive two liters of beer and chicken.
…More
From
US$189.61
From
US$189.61

281
Gain insight into the Third Reich's rise to power and visit Dachau Concentration Camp Memorial Site on this full-day Munich combo tour. Travel to Dachau, the first Nazi concentration camp in Germany, and explore the memorial site with a guide. Then, learn about the history of Nazi Germany during World War II, and see some of the buildings associated with Adolf Hitler on a walking tour. Round-trip transportation from Munich to Dachau is included.
…More
From
US$56.29
From
US$56.29
Hand sanitiser available to travellers and staff
Social distancing enforced throughout experience
Regularly sanitised high-traffic areas
Learn More
Taking safety measures

82
Visit the famous Zugspitze, Germany’s highest peak, on this guided, full-day trip with road transfers from Munich. Take a cable car to the summit of Zugspitze, Germany's highest mountain at 2,962 meters (9,718 feet) above sea level, for breathtaking views of Germany, Austria, Switzerland, and Italy, then ride the cogwheel train back down.
…More
From
US$120.88
From
US$120.88
Face masks required for travellers in public areas
Face masks required for guides in public areas
Face masks provided for travellers
Learn More
Taking safety measures

55
Soak up the holiday spirit with a 2-hour tour of the Munich Christmas markets. With more than 20 holiday markets across the city, follow a guide through Munich's Old Town to explore the city's festive offerings, including Christkindlmarkt in Marienplatz. Shop for handmade Bavarian gifts, sip on glühwein (mulled wine), and try lebkuchen, the gingerbread cookie that has been a local Christmas staple since the 14th century.
…More
From
US$21.33
From
US$21.33
Hand sanitiser available to travellers and staff
Social distancing enforced throughout experience
Regularly sanitised high-traffic areas
Learn More
Taking safety measures

35
While visiting Munich for Oktoberfest, or to experience its popular beer culture any time of the year, take this guided, 3-hour, behind-the-scenes brewery tour. Visit several Munich breweries to see their beer-making facilities, including the fermenting tanks and malting towers. Meet master brewers and learn about the history of brewing lager. Then enjoy a fresh Bavarian pretzel with a glass of beer.
…More
From
US$34.37
From
US$34.37
Face masks required for travellers in public areas
Face masks required for guides in public areas
Face masks provided for travellers
Learn More
Taking safety measures