Welcome to Viator!
By creating an account, you agree to our Terms & Conditions and Privacy Policy.
We're creating your account. This may take a few seconds...
Account creation successful! Thank you.
Something went wrong. Please try again on the sign up page.
Questions? (888) 651-9785(888) 651-9785
When are you travelling?
Select Dates
Recommendations
All Recommendations
How to Spend 3 Days in Punta del Este
Top Beaches in Punta del Este
Price
US$0
US$500+
Duration
Time of Day
RatingClear
Specials 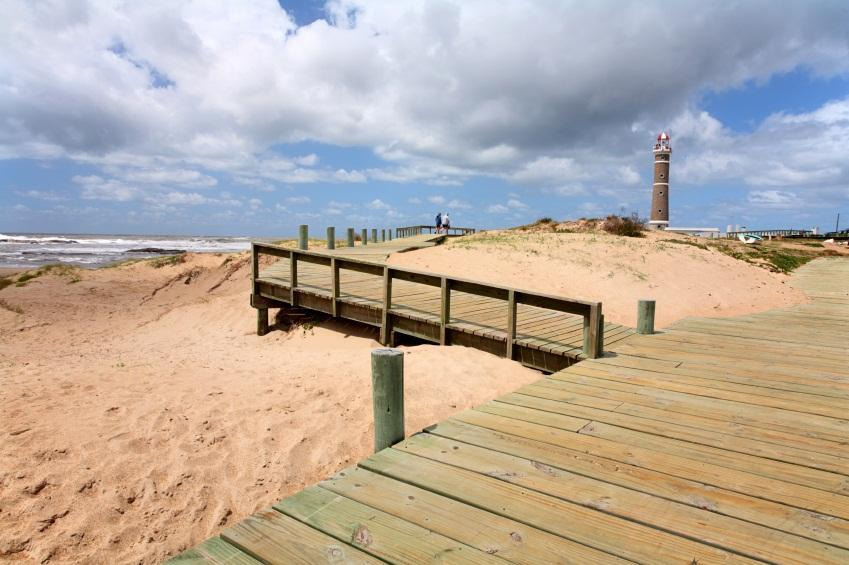 Living up to its reputation as the “French Riviera of South America,” Punta del Este is Uruguay’s flagship beach resort town, famous for sun-soaked shores, sandy beaches, and luxury hotels. Whether you’re on a day trip from Montevideo or cruising over from Buenos Aires in Argentina, here are the best beaches.

This beach looks out across the Rio de la Plata on the western side of town, and its gentle waves make it a popular spot for families. Neighboring Las Delicias is a quieter choice for those seeking relief from the busy city beaches. Swimming, snorkeling, and jet skiing are popular activities at Playa Mansa in high season.

One of the most beautiful beaches in Punta del Este, Playa Brava is often nicknamed Playa de los Dedos (Beach of the Fingers) for its much-photographed sculpture,La Mano (The Hand) by Chilean artist Mario Irarrázabal, which depicts five gigantic human fingers protruding from the sand. With its high Atlantic winds and huge waves, it’s also a hot spot for surfing, windsurfing, and other water sports. For an overview take a guided tour that includes time to eat and shop and a trip to Casapueblo, a nearby 9-story Mediterranean-style villa.

Just up the coast from Punta del Este, the coastal village of José Ignacio is surrounded by gorgeous sandy beaches, and its bohemian vibe makes it a laid-back alternative to the more elegant Punta del Este. The beaches are better suited for surfing and sunbathing than swimming, while the village itself holds a number of attractions including a handicrafts market and Sea Museum.

120
Swap the Uruguayan capital for the coastal resort town of Punta del Este. This guided day trip from Montevideo covers main attractions including the Mediterranean-style villa and art gallery of Casa Pueblo. See the fishing town of La Barra del Maldonado, and visit Playa Mansa and Playa Brava, known for its famous sculpture of fingers emerging from the sand.
…More
From
US$51.30
Price varies by group size
From
US$51.30
Price varies by group size
Face masks required for travellers in public areas
Face masks required for guides in public areas
Hand sanitiser available to travellers and staff
Learn More
Taking safety measures

14
Enjoy a half-day sightseeing tour of Punta del Este with an informative guide — a great way to see the highlights of this scenic resort area. Marvel at the whimsical fingerlike sculptures of Playa Brava; stroll past sailing yachts along the coastal seaport; spend free time browsing the shops and galleries of Gorlero Avenue and Artigas Square; and admire the Mediterranean-style villa of Casapueblo.
…More
From
US$32.62
Price varies by group size
From
US$32.62
Price varies by group size
Face masks required for travellers in public areas
Face masks required for guides in public areas
Hand sanitiser available to travellers and staff
Learn More
Taking safety measures

9
Develop a palette for Uruguayan wines on this luxury tour from Punta del Este. Sample local wine varietals accompanied by artisanal cheeses, bread, and olive oil, all while taking in views of the sunset from the terrace of an award-winning hotel in Jose Ignacio. This tour includes all tastings, a sommelier guide, and a welcome drink at the infinity pool.
…More
From
US$119.99
Price varies by group size
From
US$119.99
Price varies by group size
Face masks required for travellers in public areas
Face masks required for guides in public areas
Hand sanitiser available to travellers and staff
Learn More
Taking safety measures