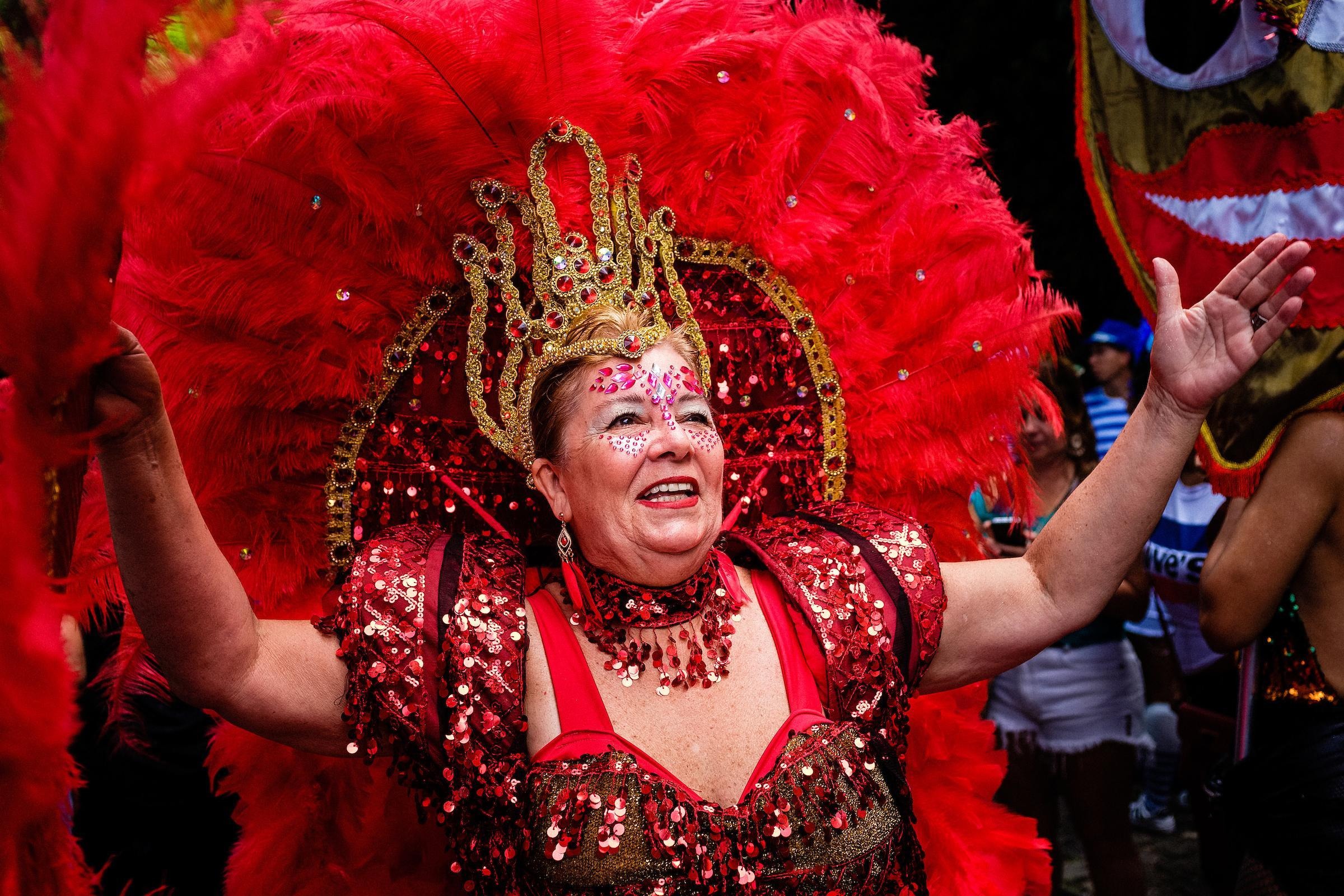 Visitors who are in Rio during Carnival are treated to five days of flashy costumes, rhythmic samba, and round-the-clock parties. From samba lessons to the Sambadrome parade, here's what you need to know to make the most of the pre-Lent festivities.

Carnival occurs each year in the days leading up to Lent (40 days before Easter), typically in February or early March. The big parades at the Sambadrome typically take place on Sunday and Monday evenings, though smaller parades are hosted on Friday, Saturday, and Tuesday as well. Hotels and clubs around town host grand balls, the most famous of which is Saturday's Magic Ball at the Copacabana Palace Hotel on Copacabana Beach.

Visitors to beachy Rio have many options for taking in the Carnival festivities. Enjoy the Carnival parade hassle-free with pre-booked tickets and round-trip transportation, go behind the scenes during a rehearsal at a top samba school, or tour the Academicos do Grande Rio's warehouse, where the extravagant parade costumes and floats are stored. While in town, don't miss the chance to see other iconic attractions, like the Christ Redeemer statue and Sugar Loaf Mountain, with an early-access or skip-the-line tour.

165
Soar above the city of Rio de Janeiro aboard a hang glider during this 4-hour adventure. Accompanied by a fully certified instructor, launch from the Tijuca Forest National Park, and glide over the lush, verdant Mata Atlantica (Atlantic Forest). Take in views of some of Rio's most famous landmarks, such as Sugar Loaf Mountain, the Rocinha Favela, and the Christ the Redeemer Statue atop Corcovado Mountain. Touch down for a gentle landing on the white sands of Sao Conrado Beach. Round-trip transportation is available for additional cost, but a video DVD of your hang-gliding experience is included.
…More
From
US$149.00
From
US$149.00
Face masks required for travellers in public areas
Face masks required for guides in public areas
Hand sanitiser available to travellers and staff
Learn More
Taking safety measures

5
Attend the epic Rio de Janeiro Carnaval (Carnival) parade with this ticket for a seat in Sector 9 in the Sambadromo (Sambadrome). View talented samba dancers in outrageous costumes as they dance their hearts out in one of the world's most famous Carnival celebrations. This ticket provides a fantastic view of the parade grounds, where you'll see all of Rio's samba schools strut their stuff, accompanied by elaborate parade floats and infectious drumming. Choose one of four nights, and upgrade to include round-trip transportation from your Rio hotel if you choose.
…More
From
US$149.99
From
US$149.99
Face masks required for travellers in public areas
Face masks required for guides in public areas
Hand sanitiser available to travellers and staff
Learn More
Taking safety measures

365
Beat the crowds and visit Christ the Redeemer, on the peak of Corcovado Mountain, in the morning with a local guide. Then hop on the cable car to the top of Sugar Loaf Mountain. Bring your camera to capture the panoramic views from the city's high point as the morning light bathes the city. Opt to add a Brazilian barbecue buffet and/or a city tour of Rio's main key landmarks.
…More
From
US$128.60
From
US$128.60
Face masks required for travellers in public areas
Face masks required for guides in public areas
Hand sanitiser available to travellers and staff
Learn More
Taking safety measures

51
Immerse yourself in the culinary scene of Rio on this interactive evening at a small cooking studio. Learn about the flavors, ingredients and cooking techniques specific to Brazilian food from your instructor. Cook a meal, either Bahian seafood Moqueca or a black bean Feijoada, using what you learned and then enjoy the fruits of your labor. The class is limited to 7 participants to ensure an intimate experience and personalized attention.
…More
From
US$74.99
From
US$74.99

4
Get a glimpse behind the scenes of Carnival during this tour of Cidade do Samba. On this outing, follow your guide on a tour of the Acadêmicos do Grande Rio's warehouse, one of Rio's top samba schools, where they store their outrageous costumes and grandiose parade floats. Toast to your insider's experience with a traditional caipirinha while you learn about the history and culture of the Carnival in Brazil. Brave visitors can even try on a few feathered costumes. Round-trip transportation from central Rio hotels is included.
…More
From
US$63.99
Price varies by group size
From
US$63.99
Price varies by group size
Face masks required for travellers in public areas
Face masks required for guides in public areas
Hand sanitiser available to travellers and staff
Learn More
Taking safety measures

77
Sail on Guanabara Bay for half a day, viewing the Rio's picturesque city skyline and Sugarloaf Mountain from the water. On this cruise from Rio, glide through the bay's tranquil waters, passing islands and historic forts. Upgrade your experience to enjoy a local all-you-can-eat barbecue lunch at a restaurant in Rio. Round-trip transportation from most Rio hotels is included.
…More
From
US$59.99
Price varies by group size
From
US$59.99
Price varies by group size
Face masks required for travellers in public areas
Face masks required for guides in public areas
Hand sanitiser available to travellers and staff
Learn More
Taking safety measures

119
Experience the vibrant culture and coastal charisma of Rio de Janeiro on an exciting 4-hour bike tour of the beguiling Brazilian city. Follow a knowledgeable guide on an explorative route past landmarks like Copacabana Beach, São João Batista and the colored Steps of Selaron. Gaze at the iconic Christ the Redeemer statue on his cliff-top perch and explore Rio’s famous celebrity cemetery. Stop regularly to capture photographs and listen to illuminating commentary from your expert guide.
…More
From
US$45.87
From
US$45.87

4
Hit the town to experience Rio's nightlife with a local guide on this private 8-hour evening tour. Party with the locals and enjoy the VIP treatment at hot spots like Rio Scenarium and other bars and clubs in Zona Sul, Santa Teresa and Leblon. Entrance fees at each destination are included, and you'll skip the long lines at the entrance. See how the 'Cariocas', or Rio residents, like to party. . . and see if you can keep up. Round-trip transportation from most Rio hotels is included.
…More
From
US$215.00
From
US$215.00
Face masks required for travellers in public areas
Face masks required for guides in public areas
Face masks provided for travellers
Learn More
Taking safety measures

One Night in Rio - Best of Rio's Local Nightlife

2
Experience a great night out in Rio with the help of nightlife consultants. The night can be customized to your interests and desires and skip-the-line access is always guaranteed. Whether you want a low-key night out or want to part until the sun rises, there is something for everyone in the ‘Marvelous City.’ This tour also includes a pickup from your Rio hotel.
…More
From
US$149.00
From
US$149.00