Welcome to Viator!
By creating an account, you agree to our Terms & Conditions and Privacy Policy.
We're creating your account. This may take a few seconds...
Account creation successful! Thank you.
Something went wrong. Please try again on the sign up page.
Questions? (888) 651-9785(888) 651-9785
When are you travelling?
Select Dates
Recommendations
All Recommendations
Two Days in Toronto
The Food Lover's Guide to Toronto
Niagara Falls from Toronto
How to Spend 3 Days in Toronto
Food Lover's Guide to Toronto
How to Spend 2 Days in Toronto
Price
US$0
US$500+
Duration
Time of Day
RatingClear
Specials

How to Spend 3 Days in Toronto 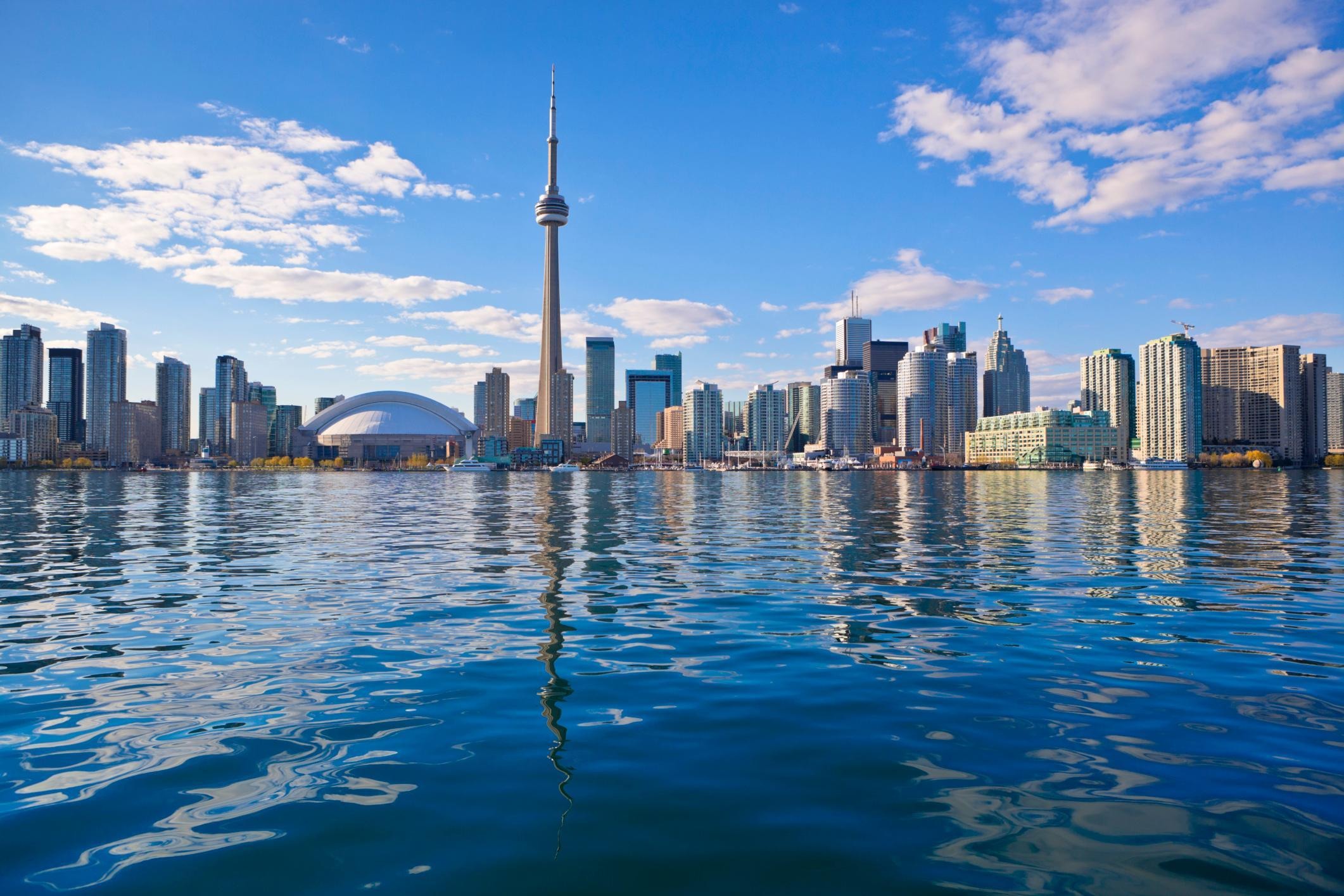 Whether you’re a culture vulture, a dedicated foodie, a devoted sports fan, or an architecture lover, Toronto is the place to be. Book a 3-day stay, and have time to explore Toronto’s top attractions and to take a day trip to Niagara Falls. Here’s how to create the perfect, 3-day plan.

Given Toronto’s impressive scope (it’s home to nearly 3 million people and is the largest city in Canada), it can take time to orient yourself. Dedicate your first day in town to discovering Toronto by bus, boat, and helicopter. A hop-on hop-off bus tour makes for an accessible way to kick off your day, and allows you to see more of the top sights—from the CN Tower to the Hockey Hall of Fame—in less time, without a map. After several hours of exploring via double-decker bus, enjoy an entirely new angle on Toronto on a cruise of Toronto Harbour. Learn the city’s history as you go, capture photos of its skyline, and glimpse the scenic Toronto Islands. A night, there’s nothing like a helicopter ride to cap off the day’s adventures—though you may want to squeeze in a post-flight bite in the buzzing Entertainment District or vibrant Chinatown.

With the major sights under your belt, you can dedicate your second day in town to exploring Toronto’s cultural offerings and food. Sign up for a brunch tour for a relaxing start to the day. Venture to some of the city’s hippest hoods—like Queen West—and get ready to stroll, people-watch, and sample local brunch classics, from bloody Caesars to baked goods. Alternatively, hit St. Lawrence Market or Ossington Avenue (two of the city’s top culinary destinations) for a more varied tasting itinerary. In the afternoon, explore one of Toronto’s many world-class museums, from the Royal Ontario Museum and Art Gallery of Ontario to the Aga Khan Museum. Later in the day, your nightlife options abound: Go for a beer-themed crawl of the city’s hyped breweries with a guide to show the way, or hit up the city’s celebrated speakeasies.

Given that Toronto is less than a 2-hour drive from Niagara Falls, it’s no surprise that the natural wonder is at the top of most day-trippers’ to-do lists. Book a full-day getaway from Toronto for a seamless sightseeing experience, from round-trip transportation to a ride aboard Hornblower Niagara Cruises. Alternatively—for those who may have already visited the falls—Ontario offers further enchantments. The well-preserved, 19th-century Niagara-on-the-Lake is ranked as one of Canada’s most beautiful small towns, and is an idyllic place to while away the day. Then there’s Ontario Wine Country. Home to a burgeoning wine scene, dozens of top-notch producers, and a selection of gourmet restaurants, it’s a popular destination for oenophiles and epicureans.

9 Tours and Activities | All Toronto Tours

Niagara Falls Platinum Tour from Toronto with Cruise and Lunch

192
Explore the border between Ontario and New York State and discover one of Canada’s most remarkable natural spectacles on this full-day Niagara Falls tour from Toronto. Travel by air-conditioned coach from Toronto to Niagara-on-the-Lake as your guide shares information on the magnificent falls’ geography and heritage. Stop on route to capture the rugged scenery on camera, and visit a winery to sample some of the region’s delicious wines. Explore Niagara Falls at your leisure, and including time to enjoy a meal overlooking the falls and a dramatic boat cruise!
…More
From
US$115.77
From
US$115.77
Regularly sanitised high-traffic areas
Gear/equipment sanitised between use
Transportation vehicles regularly sanitised
Learn More
Taking safety measures

169
Get to know the best of Toronto on this guided, 3.5-hour bike tour. Learn about the history, culture and architecture of the largest city in Canada, along with some of its fascinating stories and facts. Ride through the bustling downtown district as well a few scenic areas off the beaten path. This tour includes the sights and sounds of the CN Tower, Chinatown, Kensington Market, the Hockey Hall of Fame, Toronto City Hall and much more. Use of a bike and helmet, plus granola bars and water are included.
…More
From
US$67.54
From
US$67.54
Face masks required for travellers in public areas
Face masks required for guides in public areas
Hand sanitiser available to travellers and staff
Learn More
Taking safety measures

7-Minute Helicopter Tour over Toronto with a Souvenir Photo

59
See the city of Toronto and the surrounding region on this brief but stunning helicopter flight. Soar over the largest city in Canada with an exclusive sightseeing tour of Toronto’s downtown skyline and beyond, including the iconic CN Tower, the Canadian National Exhibition grounds, and the beautiful Lake Ontario waterfront. This incredible flight covers almost nine miles and includes one keepsake digital photo (delivered online) plus a printed souvenir picture. A variety of departure times are available throughout the day to fit into almost any schedule.
…More
From
US$98.16
From
US$98.16

60
Purchase your admission to the Art Galley of Ontario ahead of time to avoid sold-out days and times at this popular attraction. With ticket in hand, you'll save time waiting in line to buy a ticket once you arrive. Proceed on a self-guided tour of the museum, which features signature Canadian works, African art, contemporary paintings, and the masterpiece The Massacre of the Innocents by Peter Paul Rubens.
…More
From
US$19.42
From
US$19.42
Face masks required for travellers in public areas
Hand sanitiser available to travellers and staff
Social distancing enforced throughout experience
Learn More
Taking safety measures

128
On our 3-hour guided tour of Kensington Market & Chinatown, we visit seven unique tasting locations. We begin our tour in Chinatown where we visit small businesses operated by families who serve a variety foods from across China before entering into the heart of Kensington market. The food is vibrant and exciting and bolstered by the fascinating stories of how they arrived in Toronto. You’ll have enough to eat for a hearty and satisfying lunch with dishes that include dumplings, Dan Dan Noodles, fish & chips and a Jamaican Patty plus more. All food and drink tastings are included in the ticket price. We even throw in a water bottle to keep you hydrated!
…More
From
US$58.26
From
US$58.26
Face masks required for guides in public areas
Hand sanitiser available to travellers and staff
Social distancing enforced throughout experience
Learn More
Taking safety measures

59
Combine a Hornblower cruise—which includes priority admission—around Niagara Falls with a buffet lunch at the Sheraton Fallsview on this full-day tour from Toronto. Take time to explore Niagara-on-the-Lake and sample some of Canada's famous ice wine at a local estate. Round-trip transportation from Toronto hotels included.
…More
From
US$131.31
From
US$131.31
Face masks required for travellers in public areas
Face masks required for guides in public areas
Face masks provided for travellers
Learn More
Taking safety measures

57
Zip through Toronto’s Distillery Historic District on a Segway tour that explores the colorful stories behind the cobblestone streets and 19th-century architecture. Learn to start, steer, and stop a Segway, then follow an expert guide through the heart of the neighborhood. This Toronto Segway tour includes all necessary equipment, and it’s a fun introduction to a revitalized manufacturing district.
…More
From
US$46.61
From
US$46.61
Face masks required for travellers in public areas
Face masks required for guides in public areas
Face masks provided for travellers
Learn More
Taking safety measures

12
Mr. Toronto Food Tours connects food lovers with the city's most authentic purveyors. We venture off the beaten path to showcase Toronto’s best artisan food and drink from around the world. We believe food is the universal language that unites people. Our experiences are curated to connect you to the greatest food city in the world and the people within it. It's that simple.
…More
From
US$78.89
From
US$78.89

1135
Discover one of the world’s most famous waterfalls on this Niagara Falls day tour from Toronto. Take a scenic drive along the Niagara Parkway with your guide. Admire top regional attractions such as the floral clock. Visit a local winery estate and sample three of the delicious wines for which the Niagara region is famous. Spend about three hours exploring the Niagara Falls site and marvel at the swirling, surging flow.
…More
From
US$73.73
From
US$73.73
Face masks required for travellers in public areas
Face masks required for guides in public areas
Face masks provided for travellers
Learn More
Taking safety measures