Welcome to Viator!
By creating an account, you agree to our Terms & Conditions and Privacy Policy.
We're creating your account. This may take a few seconds...
Account creation successful! Thank you.
Something went wrong. Please try again on the sign up page.
Questions? (888) 651-9785(888) 651-9785
When are you travelling?
Select Dates
Recommendations
All Recommendations
How to Experience Venice Carnival
Skip the Line at St Mark's Basilica
Things to Do in Venice This Winter
Skip the Line at the Doge's Palace
Must-See Museums in Venice
How to Spend 1 Day in Venice
Venice Gondola Tours with a Serenade
Price
US$0
US$500+
Duration
Time of Day
RatingClear
Specials 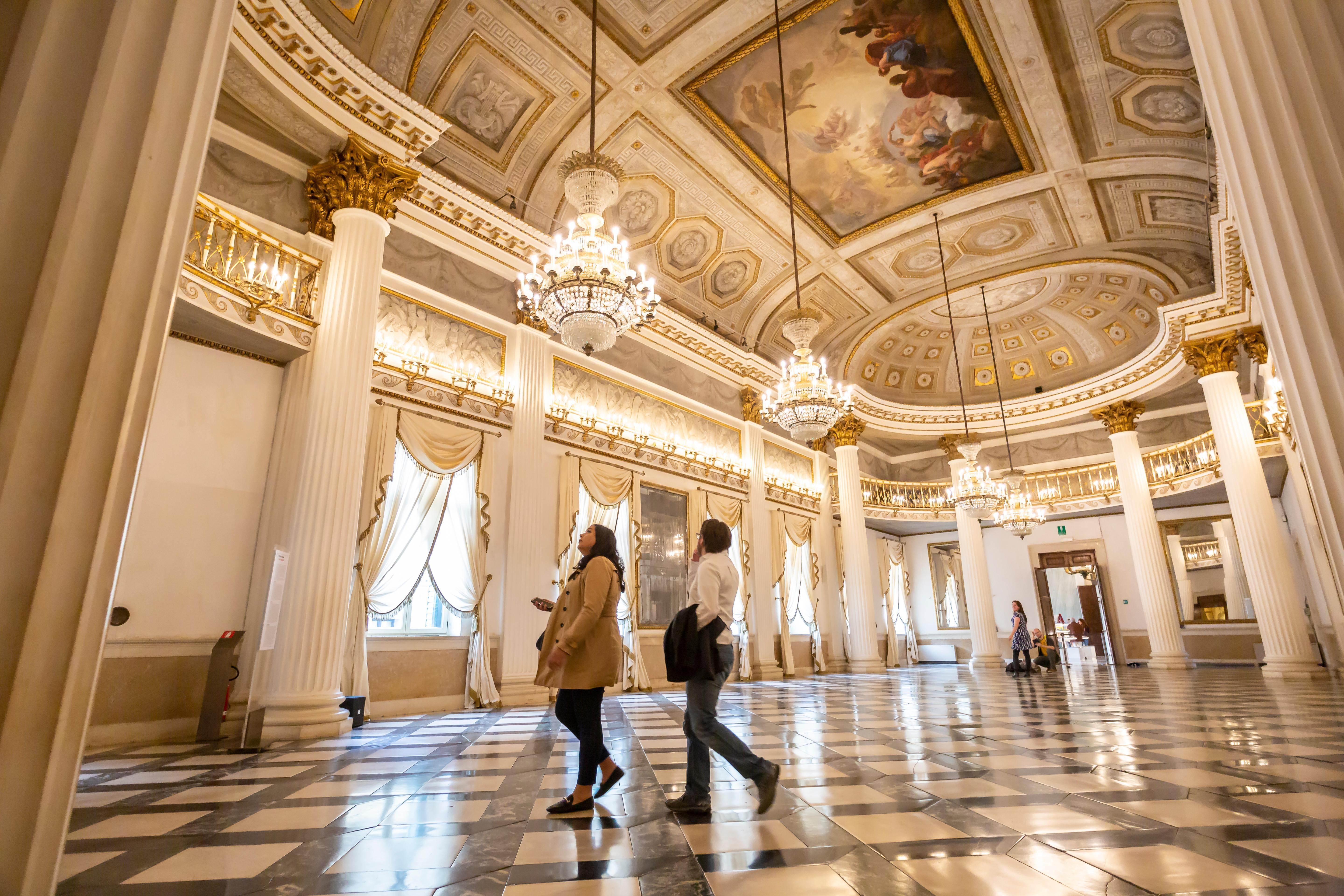 Venice is known for the Gothic facades lining its canals, but don't miss heading inside for equally sumptuous interiors. Many of these historic palaces now house museums, so it's easy to take in the beauty of the buildings while also visiting their collections. Here are six of Venice’s most remarkable palace museums.

The massive Gothic masterpiece adjacent St. Mark’s Basilica is one of the city's most popular attractions. After being built in the 14th century, it was the residence of the ruling Doge and seat of Venetian government for centuries. A visit to the symbol of Venice offers up richly decorated halls, a dour prison, and Bridge of Sighs. Be sure to book a tour with skip-the-line tickets, or spend hours waiting to get in.

Just across the square from Doge’s Palace, this opulent museum is home to an extensive collection dedicated to Venetian art and history. Take in its sculptures, paintings, documents, and other artifacts displayed in neoclassical and Imperial halls with a single ticket that also includes entrance to Doge’s Palace, National Archaeological Museum, and Marciana National Library.

Savor masterpieces by Venetian artists such as Titian, Canaletto, Giambattista Tiepolo, and Paolo Veronese in the ornate former Scuola della Carità set directly on the Grand Canal. The gallery houses Venetian paintings from the 14th century to the 18th century, as well as Leonardo da Vinci’sVitruvian Man.

Arguably the most magnificent of all the palaces lining the Grand Canal, this example of Venetian baroque and rococo architecture is decorated with frescoes and trompe l’oeil by Venetian masters and houses the Museum of 18th-Century Venice with paintings by Canaletto, Tintoretto, and others.

Also set along the Grand Canal, this 18th-century palace houses two museums under its painted ceilings. The International Gallery of Modern Art (Galleria Internazionale d’Arte Moderna) has works by some of Italy’s most influential modern artists such as De Chirico, De Pisis, and Sironi, as well as international heavy-hitters such as Kandinsky and Magritte. Upstairs, the Museum of Oriental Art (Museo d’Arte Orientale) is home to Prince Enrico di Borbone’s vast collection of works primarily from the Edo era.

One of Venice’s most prestigious museums is dedicated to the masters of  20th-century art. Amassed by the influential American art collector and heiress for which it is named, this collection displays works by Picasso, Pollock, Kandinsky, Magritte, Dalí, and Calder in Palazzo Venier dei Leoni, which was Guggenheim’s Venetian pied à terre in the final decades of her life.

7 Tours and Activities | All Venice Tours

1210
Delve into Venetian history on this tour that showcases two of the city's most iconic structures and sheds light on the stories behind them both. Enjoy skip-the-line access to both popular attractions. Your first stop is legendary St. Mark's Basilica. Wander around the mosaic-covered interior and Byzantine treasures while a local guide fills you in on how this collection came to be. Then continue to the Doge’s Palace to explore the former political heart of Venice.
…More
From
US$83.17
Price varies by group size
From
US$83.17
Price varies by group size
Face masks required for travellers in public areas
Face masks required for guides in public areas
Face masks provided for travellers
Learn More
Taking safety measures

697
Explore the best of Venice at a 10% discount with this Super Saver combo of three popular tours. Skip the line at the Doge’s Palace, where you can wander through ornate public rooms and across the notorious Bridge of Sighs. You’ll also head to the front of the long queue at St Mark’s Basilica to tour the dazzling interior of this Byzantine masterpiece including Pala d'Oro and enjoy a guided walking tour of Venice’s hidden gems. Finally, cruise down the Grand Canal aboard a motorboat and soak in the majestic passing scenery.
…More
From
US$167.54
Price varies by group size
From
US$167.54
Price varies by group size
Face masks required for travellers in public areas
Face masks required for guides in public areas
Hand sanitiser available to travellers and staff
Learn More
Taking safety measures

529
See two of Venice's top sights in one tour of St. Mark's Basilica and the Doge's Palace. Enjoy skip-the-line access to avoid the long lines that typically form outside these important attractions. Marvel at the golden mosaics that adorn the interior of St. Mark's Basilica, one of the finest masterpiece of Byzantine art. Walk through the ornately-decorated halls of the Doge's Palace and imagine life during the Venetian golden age. Immerse yourself in the history of Venice through two of its most important buildings.
…More
From
US$95.22
From
US$95.22
Face masks required for travellers in public areas
Face masks required for guides in public areas
Social distancing enforced throughout experience
Learn More
Taking safety measures

208
See the Doge's Palace, which served as the center of power in the Venetian Republic, with this skip-the-line 1-hour guided tour. Marvel at the artistic treasures in the palace, including paintings by Titian, Tintoretto and Veronese. Walk through ornately-decorated halls and imagine Venice in its so-called Golden Age. Walk across the Bridge of Sighs from the Doge's Palace into the infamous prison, where Casanova was once held. Enjoy personalized attention from a knowledgeable local guide.
…More
From
US$71.12
From
US$71.12
Face masks required for travellers in public areas
Face masks required for guides in public areas
Social distancing enforced throughout experience
Learn More
Taking safety measures

7
Get your ticket in advance to visit the Accademia Galleries in Venice and avoid any lines at the entrance. See works of art by Italian masters like Tintoretto, Titian, Veronese, Bellini, Carpaccio, Giorgione, and more, from the 14th through the 18th centuries.
…More
From
US$23.65
From
US$23.65
Face masks required for travellers in public areas
Face masks required for guides in public areas
Hand sanitiser available to travellers and staff
Learn More
Taking safety measures

3
Venture away from the crowds to discover hidden corners of Venice and some of the city’s finest art on this 2-hour guided tour of the Accademia Gallery plus the Santa Croce and Dorsoduro districts. Admire masterworks by Venetian painters like Veronese and Titian at the museum, and then stroll through the surrounding neighborhoods with a guide to discover inspiring canal views and one of Venice’s last surviving gondola shipyards.
…More
From
US$72.32
From
US$72.32

Delve into the opulent history and culture of Venice with a private, skip-the-line tour of the Correr Museum. Explore highlights of the illustrious collection featuring artwork by Bellini, El Greco, Carpaccio, and other European masters, and feel the former grandeur of the city while strolling through lush apartments filled with period decor, costumes, and historical navigation tools. A private guide provides personalized attention and expert insight to make the most of your visit.
…More
From
US$65.09
From
US$65.09
Face masks required for travellers in public areas
Face masks required for guides in public areas
Social distancing enforced throughout experience
Learn More
Taking safety measures