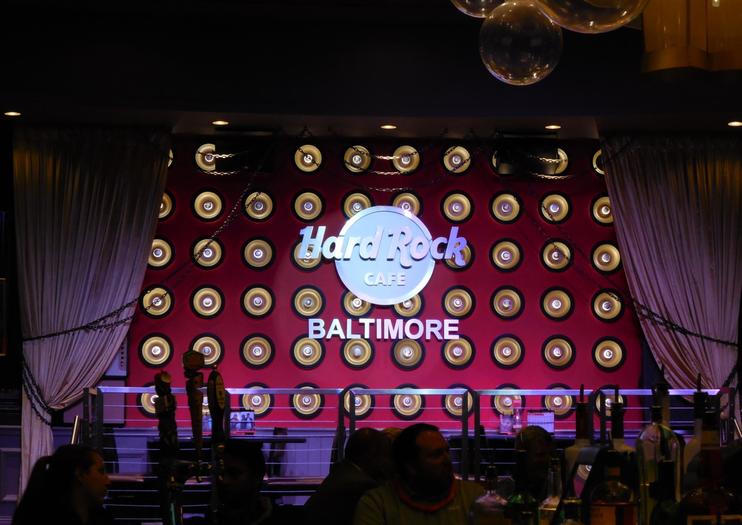 Offering sweeping views of the Inner Harbor, the Hard Rock Café Baltimore is one of the city’s most historic and popular places for dining on the water. Though the restaurant itself was only established in 1997, it’s located inside the Pratt Street Power Plant that was built in in 1900. With its Neoclassical, terra cotta construction, the building is a famous Inner Harbor landmark that in 1987 was added to the National Register of Historic Places.
Enjoy your meal on the outer deck with views looking out at the harbor, where Francis Scott Key, in 1814, was inspired to write America’s national anthem while imprisoned by British forces. The Americana lives on today through burgers and rock n’ roll, and memorabilia hangs on the walls from some of the country’s best artists. See one of Prince’s custom-tailored outfits or a flask belonging to Jimi Hendrix, as well as clothing from British rockers like Elton John and The Who. Pair the view and memorabilia with American food and live music, and the Hard Rock Café Baltimore becomes an experience and sight unto itself.

There are parking garages located within walking distance of the Power Plant building and the harbor. The nearest metro is Shot Tower station, which is .4 miles from the restaurant.
Did You Know? The view from the deck looks out toward Fell’s Point, which was the second largest point of U.S. immigration after Ellis Island in New York.
Address: 601 E. Pratt Street, Baltimore, Maryland, USA
Read MoreShow Less

12
Rock out on your visit to Baltimore with a meal at Hard Rock Café, where you can feast on classic American fare with a 2- or 3-course meal. Meals are themed and each option comes with a drink (tea, coffee, or soda), as well as a tasty dessert. For the heart of the meal, choose from classics like salmon, steak, or a half-rack of hickory smoked ribs, and there are even some vegetarian options on the popular prix-fixe menu.
...  More
From
US$32.99
From
US$32.99
Learn More

Things to do near Baltimore