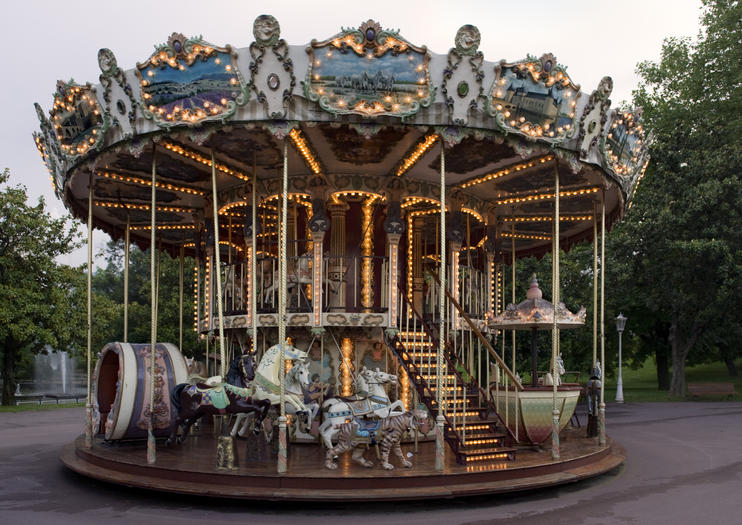 This almost 100-year-old park was named after former Bilbao resident Casilda Iturrizar. Much to future Bilbaínos’ fortune, she had married a wealthy businessman and, after his death, dedicated her life to charity. Without any heirs, when she finally passed she decided to leave the Bilbao space to the public. Eventually, it was turned into a park with French- and Romantic-style gardens in 1907, and has been a central getaway for locals ever since.

Nowadays, Doña Casilda Iturrizar Park (or, as it is affectionately called by the locals, Duck’s Park, due to the pond) is a bit smaller than it used to be, with the Bilbao Fine Arts Museum occupying one of its corners since the 1940s. Within its now 85,200-square-meter boundaries, you’ll come across monuments, sculptures, basketball courts, and a classic merry-go-round. The park also offers other sights, like the duck pond where you can rent rowboats, or a dancing water fountain, which comes to life with light and sound shows during the holidays.

Doña Casilda Iturrizar Park is situated in the Indautxu neighborhood, and just about a five-minute walk away from the Guggenheim Museum. Take advantage of your trip there to check out the Bilbao Fine Arts Museum, and to stroll past other central sights like the main square, Plaza Moyúa, or the cultural space Alhóndiga Bilbao.
Address: Parque Doña Casilda Iturrizar, Bilbao, Spain
Read MoreShow Less

6
Take a bike route with us and enjoy all the attractions that both tourist Bilbao and more alternative and unknown Bilbao offer you. Mix with the city and its inhabitants and get to know all our customs and traditions thanks to our team of professional guides who are perfectly knowledgeable about the city.
…More
From
US$38.07
From
US$38.07
Face masks required for travelers in public areas
Face masks required for guides in public areas
Hand sanitizer available to travelers and staff
Learn More
Taking safety measures