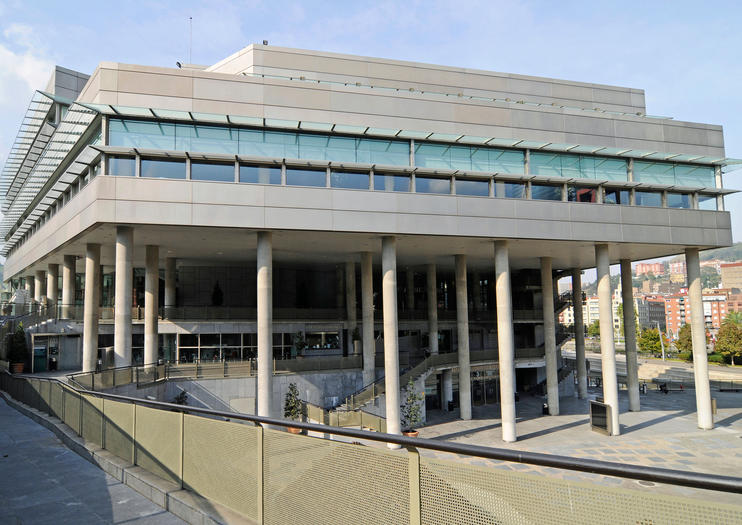 The Guggenheim isn’t the only waterside architectural wonder in Bilbao; just up the river sits another impressive construction, the Euskalduna Palace. The building, which was inaugurated in 1999, features mosaic-style windows, and massive exterior walls of rusty looking corten steel. The inspiration behind the look: to stand symbolically as the last vessel built in the dry dock of the former Euskalduna Shipyard, which played an important role in the city’s growth and history.
The architecturally acclaimed Euskalduna Palace houses over 50,000 square meters of space, and boasts both the largest and second largest stages in Spain. The multipurpose venue serves as an opera house, concert hall and conference center, and therefore hosts a range of events from cultural to corporate. Temporary exhibitions are held here as well.

The palace is located within walking distance of other main Bilbao sights such as Doña Casilda Park, the River Maritime Museum, and the Guggenheim Museum, which can be reached by walking east along the waterfront.
Address: Avenida Abandoibarra 4, Bilbao, Basque Country 48011, Spain
Read MoreShow Less

Because you will feel like an actor in the town of BILBAO, playing your leading role and discovering the theatrical culture of the city.
…More
From
US$306.60
From
US$306.60

6
Take a bike route with us and enjoy all the attractions that both tourist Bilbao and more alternative and unknown Bilbao offer you. Mix with the city and its inhabitants and get to know all our customs and traditions thanks to our team of professional guides who are perfectly knowledgeable about the city.
…More
From
US$38.26
From
US$38.26
Face masks required for travelers in public areas
Face masks required for guides in public areas
Hand sanitizer available to travelers and staff
Learn More
Taking safety measures