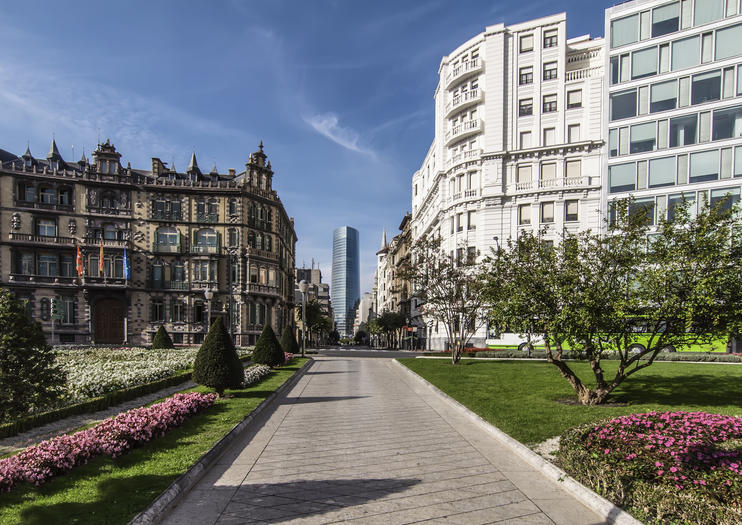 Wandering Bilbao's streets, you'll inevitably end up crossing Moyua Square (Plaza Moyua). Also known as Plaza Elíptica, due to its oblong shape, this main “square” is more than just a central crossroads, but a garden- and fountain-filled roundabout worth checking out and even stopping in (especially given its central area accessible to pedestrians).

Originally designed back in 1873, Plaza Moyúa sits in one of Bilbao's most exclusive neighborhoods, where it bisects the bustling shopping street Gran Vía. The plaza itself is dotted by various noteworthy buildings, such as the 20th-century Flemish-style Palacio Chávarri, the headquarters of the Civil Government since 1943, and the Hotel Carlton, the city's most famous hotel, which stands alone on its own spoke-like corner of the square.

The plaza is also a convenient location to catch the city's Metro – the third-busiest in Spain -- which rises out of Moyúa with its glass-domed entrance. Traveling underground, you can easily reach other parts of the city via two different lines.

You can reach Plaza Moyúa via Metro, of course, but also pretty easily by foot from most central locations. It is situated just a ten-minute walk from the Guggenheim – walking south on Alameda Recalde Zumarkalea – and a short jaunt from the nearby Bilbao Fine Arts Museum and Doña Casilda Iturrizar Park.
Address: Plaza Moyua, Bilbao, Spain
Read MoreShow Less

6
Bilbao is a very beautiful city with nice urban architecture that knows very well how to mix between the old and new style which create a unique contrast, for that reason a night tour is the best choose to meet most of the locals and discover how they live. Because we have a friendly way to show you around, join us for a maximum fun, knowledge and adventure to feel like a local after your tour.
…More
From
US$29.74
From
US$29.74
Face masks required for travelers in public areas
Face masks required for guides in public areas
Learn More
Taking safety measures

10
The only Food and photography expert-led PINTXO TOUR in Bilbao. Join me for a walking, photographing, eating & drinking experience you'll never forget! We'll visit 5 different bars for a glass & a pintxo (sophisticated Basque tapa) at each one. It's a full meal & exactly what the locals like to do. You'll BE A LOCAL with me! Along the route, I'll show you the sites & tell you about the history & culture of the Basque Country, we will visit the RIBERA MARKET but my focus is definitely on FOOD & DRINK. My route & the menu changes daily, but we'll do a mix from the traditional to the modern. Expect to eat anchovies, octopus, bacalao in pil-pil sauce, squid, foie gras, local cheese... and ending of course, with a traditional dessert. Thirsty? I'm great at pairing the perfect pour with the perfect plate, from local ciders to white wine (txakoli), young & aged Tempranillo​ from La Rioja, beer & beyond maybe we'll dip into some vermouth too? Or want to try our local drink Kalimotxo?
…More
From
US$152.52
From
US$152.52
Face masks required for travelers in public areas
Face masks required for guides in public areas
Hand sanitizer available to travelers and staff
Learn More
Taking safety measures

7
Get acquainted with Bilbao old and new in one trip with this small-group walking tour, ideal for first-time visitors. Stroll around the landmarks of the cobbled Old Town (Casco Viejo) and cross the River Nervion to view the turn-of-the-century buildings and avenues of the New Town, learning how it developed during the 1800s. On route, enjoy a ‘txikiteo’ or ‘poteo’ bar crawl, tasting 'pintxos' (skewered tapas) at various drinking spots.
…More
From
US$57.10
Price varies by group size
From
US$57.10
Price varies by group size