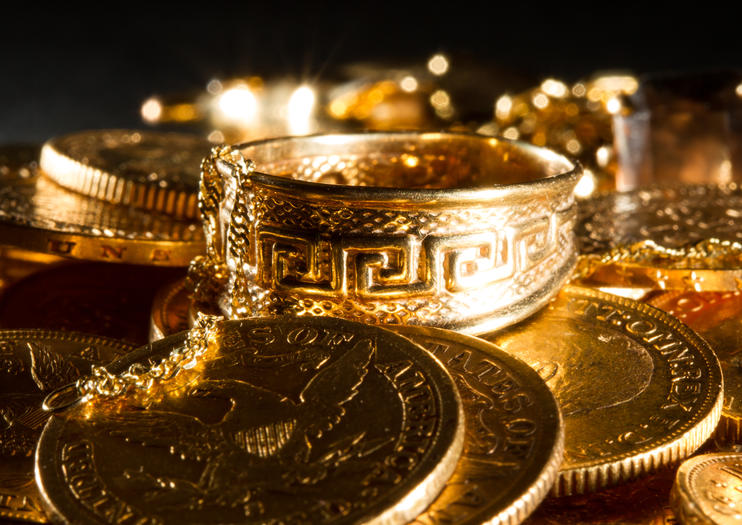 To archaeologists, the Lord of Sipan was a Moche noble now known as the “King Tut of Peru.” To centuries of Peruvian grave robbers (huaqueros), he was one grave they wished they’d found. To visitors traveling to the town of Chiclayo, he is the reason why you can walk through a room that is dripping in jewels and gold.  Of all the museums you can visit in Chiclayo, the Royal Tombs of Sipan Museum is one that you absolutely must see.
Buried in a tomb beneath the desert sands to the south of modern day Chiclayo, the Lord of Sipan lay undisturbed for over 1,700 years. In 1987, however, a team of archaeologists unearthed a tomb at the remote Huaca Rajada, and what they found inside is considered to be one of the greatest finds of the last 50 years. Lying inside a wooded sarcophagus were the remains of a king, a warrior, three concubines, two dogs, a llama, a priest and a guard with no feet. Also, there were jewels—lots of gold and jewels.
Today the tomb site and many of its findings are on display at the Royal Tombs of Sipan Museum, a building with a strikingly modern appearance that is modeled after the Moche pyramids. Gaze at headdresses and armored plates made entirely from silver and gold while inwardly contemplating how such valuable pieces remained buried and hidden for so long.

The Royal Tombs Museum of Sipan is a 10-minute drive from the center of Chiclayo in the town of Lambayeque. The museum is open from 9 a.m. to 5 p.m. Tuesday through Sunday. There is an admission fee of 15 Nuevo Soles ($4), and no photography is allowed.
Address: Av. Juan Pablo Vizcardo y Guzman s/n, Lambayeque, Peru
Hours: 9 a.m. to 5 p.m. Tuesday through Sunday
Admission: 15 Nuevo Soles ($4)
Read MoreShow Less

9 Tours and Activities to Experience Royal Tombs of Sipan Museum

2
Enjoy a fascinating visit to the Royal Tombs Museum, home to ancient treasures, mummies like the Lord of Sipán and more. Set out from Chiclayo to Lambayeque to explore this wonderful collection of artifacts belonging to northern Peru's Moche people. See rarities not excavated until 1987 and learn more about this intriguing civilization that thrived in the region from the 1st until the 8th centuries. The museum offers both private and group tours.
...  More
From
US$35.30
Price varies by group size
From
US$35.30
Price varies by group size
Learn More

2
We started two hours before the competition, at 8:30 in the morning, this gives us more time in each place to visit. Our tour guides are bilingual and the office staff too. Ventarrón, our oldest pyramid, sometimes needs repair of structures or maintenance, so if it is not possible to visit it we offer you the Brünning museum, here is a very complete sample of the entire history of our region with more than two thousand archaeological pieces originals Consider this in case a change is necessary. We always do three places per day. We stop at Lambayeque, in a traditional restaurant, for lunch, which is not included. Upon return we leave the group at your hotel, bus station or in the main city square.
...  More
From
US$25.65
From
US$25.65
Learn More

Visit the Moche archaeological site of Huaca Rajada and gain insight into an ancient civilization lost in time on this tour from Chiclayo. Following pickup at your centrally located hotel, explore Huaca Rajada and learn of the Moche people through detailed displays of the jewelry discovered. Discover pyramids dating back to 100 AD, and learn of Moche culture and customs at the Museum of the Royal Tombs of Sipán.
...  More
From
US$105.00
From
US$105.00
Learn More

2
Learn about two ancient Peruvian cultures and visiting related archeological sites on this day-long private tour from Chiclayo. Your guided excursion begins at Huaca Rajada, where archeologists discovered the Moche civilization's Lord of Sipán mummy in 1987. You'll also explore Túcume, an 8th century site encompassing dozens of mounds and pyramids once belonging to the Sican culture, and the Lord of Sipán Royal Tombs Museum, home to Moche artifacts including jewelry and headdresses.
...  More
From
US$148.00
From
US$148.00
Learn More

2
This half day tour starts at 10.30am from Chiclayo main square. From there we will start the day going to the Lord of Sipan Tomb and Huaca Rajada. Then we will head to the Royal Sipan Tombs museum where we can see many relics from the Moche culture.  Finally we will end the day in Brüning museum, where we can learn the story of Lamabayeque Cultures.
...  More
From
US$128.21
From
US$128.21
Learn More

We offer a private and personalized tour according to your schedule with a specialized guide in English, French or Spanish. At least 2 people are required for your reservation.
...  More
From
US$65.00
From
US$65.00
Learn More

Star visiting Tucume Archaeological Complex. It has 26 buildings of monumental structures associated with lower rank buildings as squares, walls, patios, and canals, reflecting a system of planned growth and the complicated social structure of Lambayeque. Visit also its museum, to get a better idea of what life was like during that period. Then you will head towards Lambayeque where you will visit the Royal Tombs Museum. Due to the Lord of Sipan's discovery, whose importance was shown in the complexity of its burial and apparent semi-divine status, the creation of a new museum was necessary to be in accordance with the discovery. After having lunch, you will head to the Huaca Rajada Archaeological Complex. This is a set of huge mud pyramids that date from centuries back. The place gained special notoriety in 1987 when authorities became aware of illegal excavations that had been made. And what began as a protection plan ended with the magnificent discovery of Lord of Sipan's tomb.
...  More
From
US$500.00
From
US$500.00
Learn More

Don't miss the incredible Túcume Pyramids, archeological complex with a lot of history, and also to other important centers such as Huaca Las Balsas, or the Museum Royal Tombs of Sipan. Explore northern Peru, and its ancient civilizations with our archaeological tour Tucume Pyramids & Royal Tombs of Sipán Museum
...  More
From
US$103.33
Price varies by group size
From
US$103.33
Price varies by group size
Learn More