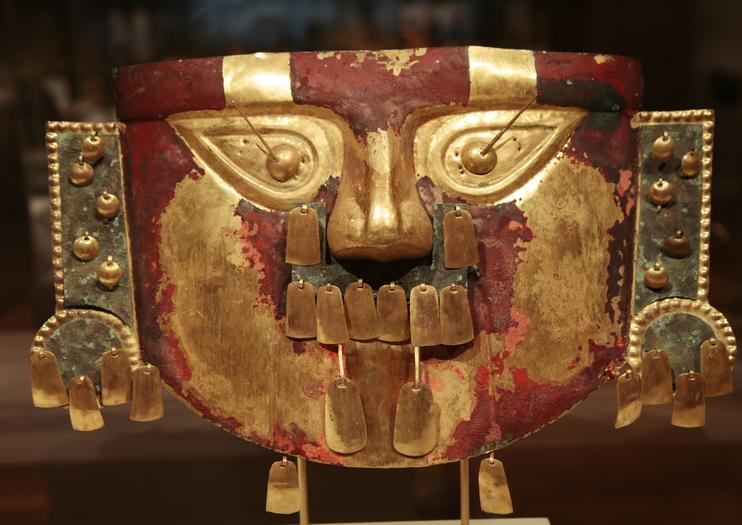 After the fall of the Moche Empire around 700 AD, the inhabitants of the Lambayeque region formed a culture now known as Sicán. Exceptionally skilled in metallurgy as well as a unique form of ceramics, the Sicán metal workers are credited with bringing the Bronze Age to northern Peru. Though massive drought would eventually bring the Sicán civilization to its knees, the ceramics, metal work, and tombs they left behind are intriguingly displayed at the Sicán National Museum in the town of Ferreñafe.
When visiting the museum, not only will you find exquisite art pieces forged by Sicán craftsmen, but you will also find artifacts that point to the existence of trade with faraway neighbors. Blue stones, for example, exhibit trade with neighboring civilizations from as far away as Chile, and snails and shells found in Sicán tombs have been traced to the beaches of Ecuador.
Also of note when visiting the museum is the re-creation of a tomb where a man was found buried in the fetal position with his head facing down towards the floor. The position, it’s believed, was meant to mimic the process of being “birthed” into the afterlife, and is one of the many cultural curiosities on display in this modern museum.

4
We started two hours before the competition, at 8:30 in the morning, this gives us more time in each place to visit. Our tour guides are bilingual and the office staff too. We stop at a traditional restaurant, for lunch, which is not included. Upon return we leave the group at your hotel, bus station or in the main city square.
...  More
From
US$25.65
From
US$25.65
Learn More

Transfer from your hotel to the city of Ferreñafe to visit the museum at Sican. This museum displays all the everyday aspects of the Sican culture, which thrived in the region around 1100. You can see the processes of making pottery and metal crafts besides a recreation of the tombs of the Sican nobles. Most of the objects are displayed in their context, that is, in the same way, they were used and made.
...  More
From
US$500.00
From
US$500.00
Learn More

Enjoy a different tour during your stay in Chiclayo, and visit the Pomac Forest & Sican Museum with us. This fun excursion will take you to explore the carob trees forest, as well as the Sican Museum, with pieces of Mochica culture dating of the year 800 and 1300 A.D.
...  More
From
US$103.33
From
US$103.33
Learn More