Túcume (Valley of the Pyramids) Tours 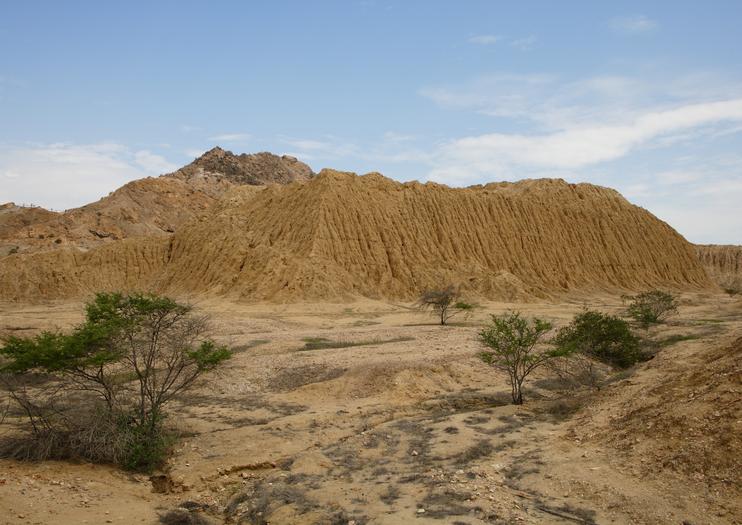 When comparing the ancient ruins of the world, Túcume might be the most fascinating site that most people have never heard of. Located 21 miles to the north of Chiclayo, Túcume is home to 26 pyramids that were built over 1,000 years ago. One of these pyramids—Huaca Larga—has a base that is over 2,000 ft. in length and was the largest pyramid in the world.
Due to heavy rains, however, these dusty, sand-carved, ancient pyramids have been reduced to eroded mounds, although archeological discoveries continue to be made in the burial chambers below. At Huaca Larga, 119 bodies were discovered deep beneath the pyramid, and evidence suggests that the bodies were part of a mass human sacrifice to the gods. Other findings are less grotesque, such as the murals and carvings of the Lambayeque god Naymlap, a revered deity who emerged from the sea and gave rise to the powerful city.
As the ancient people of the Lambayeque Valley constructed these towering pyramids, they subsequently abandoned the massive structures when they felt it would please the gods. Today, the area around Túcume is still largely abandoned, the main reason being that local villagers are wary of the spiritual past; only healers and traditional shamans will visit Túcume by night, and there is a palpable sense of power and history when touring Túcume today.

Túcume is located 20 miles from Chiclayo and is accessible by car or taxi. The drive from Chiclayo is about 30 minutes, and it’s a convenient stop on a visit to Batán Grande or the Royal Tombs Museum of Sipan. When touring Túcume’s 540 acres, the trail leading up toward Cerro Purgatorio provides the most striking views of the ruins.
Address: Chiclayo, Peru
Read MoreShow Less

5 Tours and Activities to Experience Túcume (Valley of the Pyramids)

2
Learn about two ancient Peruvian cultures and visiting related archeological sites on this day-long private tour from Chiclayo. Your guided excursion begins at Huaca Rajada, where archeologists discovered the Moche civilization's Lord of Sipán mummy in 1987. You'll also explore Túcume, an 8th century site encompassing dozens of mounds and pyramids once belonging to the Sican culture, and the Lord of Sipán Royal Tombs Museum, home to Moche artifacts including jewelry and headdresses.
...  More
From
US$148.00
From
US$148.00
Learn More

1
We want our activity to develop the culture of observation of nature and wildlife in our region, some of the places where we go are NOT common tourist destinations and depend on you coming to visit them so that the owners (families or communities) see the benefit of conserving your forest and not destroy it. We are implementing the adoption of one tree per group, in this way, doing tourism with us you give one more inhabitant to the forest and leave a greener world. We have good teams and professionals of good level who speak English and Spanish, we are qualified for the activity and we have more than ten years of experience. These walks are healthy because we do them in places with very little traffic, we are almost always the only group in the area.
...  More
From
US$38.98
From
US$38.98
Learn More

We offer a private and personalized tour according to your schedule with a specialized guide in English, French or Spanish. At least 2 people are required for your reservation.
...  More
From
US$65.00
From
US$65.00
Learn More

Don't miss the incredible Túcume Pyramids, archeological complex with a lot of history, and also to other important centers such as Huaca Las Balsas, or the Museum Royal Tombs of Sipan. Explore northern Peru, and its ancient civilizations with our archaeological tour Tucume Pyramids & Royal Tombs of Sipán Museum
...  More
From
US$103.33
Price varies by group size
From
US$103.33
Price varies by group size
Learn More