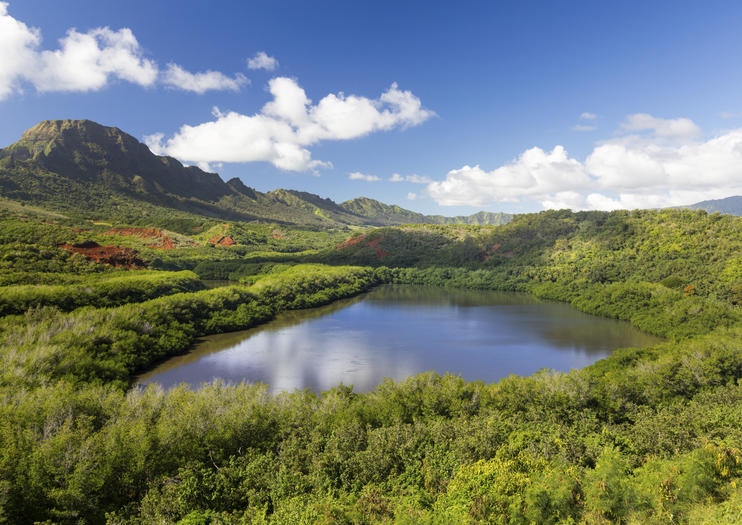 The Menehune Fishpond is scenic—set amid lush jungle where craggy mountains are close enough to frame the edges of a killer sunset photo shot. But this giant pool of green-brown water has been attributed mythical qualities that are evident even in its name. Menehune is a mysterious race of little people—some say they’re like Hawaiian leprechauns—that have been credited with building sites throughout the Hawaiian Islands swiftly and stealthily. Legend has it they built this particular 39-acre loko wai (freshwater pond) by passing stones to each other from the village of Makaweli more than two dozen miles away, damming up the Hule’ia River with walls 900 feet long and five feet tall. In a single night. To get up close and personal with the work of the Menehune, join a kayak tour of the Hule’ia—it’s the only way to gain access into the otherwise off-limits Hule’ia National Wildlife Refuge that surrounds the pond. Fishponds like this one are found throughout the Hawaiian Islands and were used to store and easily retrieve fish for the alii or ruling class. And, the Menehune Fishpond is one of the best preserved examples of a Hawaiian freshwater fishpond still in existence today.

The best place to see the Fishpond quickly is from the Alekoko Scenic Overlook off Halemalu Road, about ½ mile from the Nawiliwili small boat harbor and just outside of Lihue. Kayak tours that visit the fishpond also often include a short hike to Hidden Valley Falls.
Address: Lihue, Hawaii, USA 96766, USA
Read MoreShow Less

1
8 beautiful stops - 6 hrs Tour. Designed for All Cruise Lines docking on Kauai and on island guest. Guided by the owner, Coco Maria, you will have the highest quality of service in a small group setting. Soak up the beauty of the South and East. We will visit waterfalls, ancient Hawaiian temples of worship, and beautiful beach parks. Bring your swim suits and towels as we will make a stop at Poipu Beach Park where you can dip in the warm Hawaiian waters (optional).
...  More
From
US$146.60
From
US$146.60
Learn More

353
Soar over the entire Garden Island for unforgettable views on this air tour of Kauai. From aboard an aircraft designed for sightseeing, soak up breathtaking views of natural attractions like Waimea Canyon, Opaekaa Falls, the rugged Na Pa Coast, and Mt Waialeale — the wettest spot on earth. Your experienced pilot provides informative narration during this thrilling flight.
...  More
From
US$145.00
From
US$145.00
Learn More

52
Explore Kauai at your own pace with this audio tour app that uses GPS to guide you to and around some of the island's top attractions. Skip paying for a bus tour and make the most of your vacation time with the freedom to stop and go as you please. Along the way, the app provides narration, stories, and fun facts. The tours can be downloaded and used offline so you don't have to worry about service around the island.
...  More
From
US$21.32
per group
From
US$21.32
per group
Learn More

Experience the best of Kauai on this small group tour through the island's scenic landscape, highlights and historic landmarks. Sample locally-grown coffee at the Kauai Coffee Plantation, and visit old-fashioned Hanapepe town; follow the footsteps of Captain Cook and take in stunning views of Waimea Canyon. Feel the mist off Waipo'o Falls, watch the Spouting Horn lava tube erupt with towering surf. Maximum 10 passengers in a group. *This tour needs a minimum of 4 passengers to operate*
...  More
From
US$139.00
From
US$139.00
Learn More

1
The Poipu and Koloa Town Tour takes you on a trip back in time from when ancient Hawaiian villages dotted the area all the way to the sugarcane plantation era. Skip the tour bus and explore Kauai at your own pace for a fraction of the cost. Our app uses GPS to give you turn-by-turn directions to historic sites and popular spots while telling you interesting stories along the way. Shaka Guide is the #1-rated app for Kauai with over 2K reviews on the App Store and Google Play Store! WHY SHAKA GUIDE: ✅ Tours never expire. ✅ Tour work offline. No data needed. ✅ Reliable GPS directions. ✅ A guided tour for a fraction of the price. ✅ Save time planning! We’ve done the work for you. ✅ Your vacation, your terms — freedom to stop and go as you please. ✅ The #1-rated travel app for Maui. ✅ Listen to interesting stories and Hawaiian music!
...  More
From
US$11.32
per group
From
US$11.32
per group
Learn More