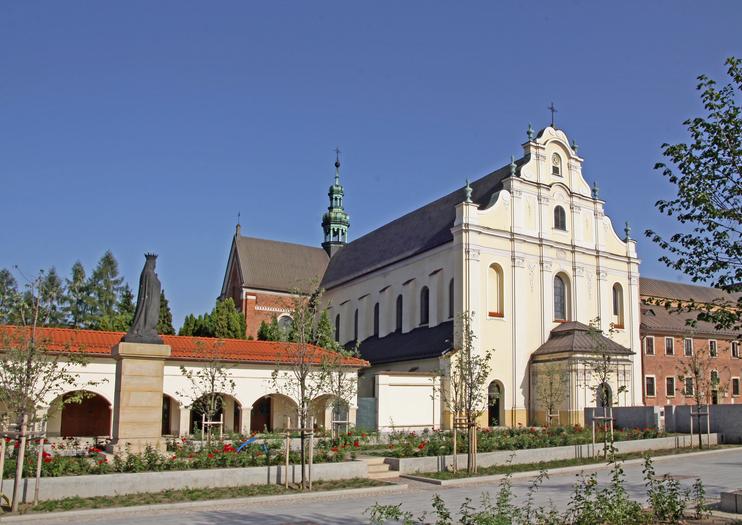 Communist repression came to Poland in 1945 after the end of World War II and lasted until the collapse of the Iron Curtain in 1989. During this time, the suburb of Nowa Huta was constructed six miles (10 kilometers) east of Krakow’s center.
Nowa Huta could not be more different from fairytale Krakow. Built as a piece of Communist propaganda to “house the people” in a garden city, it sprang up at an alarming speed during the late 1940s. At its peak, the area housed 100,000 residents among its wide boulevards, public parks and regimented apartment blocks all designed in the architectural style of the day, Socialist Realism. As with many idealistic plans, the Soviet dream town was never completed, and Nowa Huta became a hotbed of political rebellion during the Solidarity strikes of the early 1980s. Today it is one of Krakow’s biggest suburbs, the Orwellian home to 200,000 people, largely composed of rows of pre-fab apartment blocks (ironically added after the demise of Communism), a steel mill with vast entry gates and imposing office blocks flanking open piazzas.

13
Capture the bohemian spirit of Nowa Huta on a private tour in a vintage Fiat 126p—a communist-era car—from Krakow. Alongside your guide learn about the rich socialist heritage of the city before you embark on a tour of the area's Socialist Realist architecture, learning about the planned city of Nowa Huta from your private guide. There is also the option to extend the tour to visit a former steelworks administration, an intact 1950's underground bunker, and how people lived in a 50's-style apartment.
…More
From
US$36.35
Price varies by group size
From
US$36.35
Price varies by group size
Transportation vehicles regularly sanitized
Guides required to regularly wash hands
Learn More
Taking safety measures

2
Make the most of your time in Krakow with this info-packed and entertaining private guided tour of Old Town, Kazimierz and Nowa Huta. Stroll around the enchanting Old Town, learning about the ancient history of the area and seeing the main square and St. Mary's Basilica. Then head to Nowa Huta, the socialist-era part of town, founded in 1949, that was home to the Poland's first integrated steelworks. Finally, linger for a while in trendy Kazimierz, once the center of the city's Jews and location for some scenes in Schindler's List.
…More
From
US$72.36
From
US$72.36

1
Each tour is unique because You are unique! Take a tour of Our Magic City with its amazing cultural and spiritual center. Artists & students, churches, restaurants, squares, create charming atmosphere that You will experience during this tour. Visit: * Old Town little walk depending on You (walking zone) and Wawel Castle area, * Kazimierz Former Jewish Quarter with synagogues, churches, little streets and squares, * Podgorze District – Former Jewish Ghetto with remnants of walls & Ghetto Heroes Square, * Schindler’s Factory Museum (with possibility to visit), * Nowa Huta Former Communist District with Central Square, the Former Lenin Steelwork etc. We pride ourselves in arranging outstanding Tailor-made Tours to even most remote spots of our region according to our Clients Wishes. We are not just a tour, we are real experience designed especially for our unique Guests! And wherever You wish to travel, we will take You there with great care and will make Your experience unforgettable.
…More
From
US$212.05
Price varies by group size
From
US$212.05
Price varies by group size
Face masks required for travelers in public areas
Face masks required for guides in public areas
Hand sanitizer available to travelers and staff
Learn More
Taking safety measures

Explore and discover all the jewels and gems of Krakow, one of Europe's most beautiful cities, on this historical heritage tour by minibus. Visit the Old Town, as well as, some more off-the-beaten-path parts of town, such as Nowa Huta and Kazimierz.
…More
From
US$88.46
From
US$88.46

Things to do near Krakow