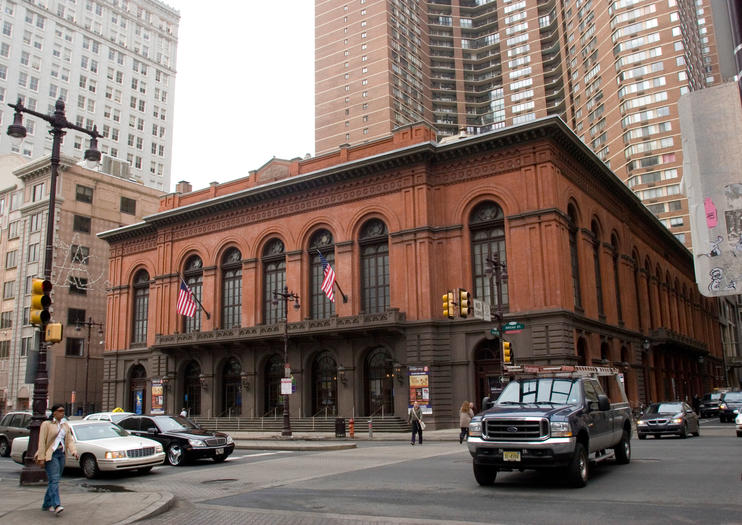 Philadelphia is home to plenty of old-school American history, and the roots of its local music scene run deep, too. Travelers in search of an elegant establishment showcasing some of the best international talent will find it all at the Academy of Music.
This unassuming building in the heart of Philadelphia is actually the nation’s oldest continually operational opera house. Its stunning interior houses a 5,000-pound chandelier and is modeled after Milan’s La Scala Opera House. In addition to being a destination for travelers seeking live, classical entertainment, the Academy of Music is a worthy stop for history buffs as well. The National Historic Landmark is the site where President Ulysses S. Grant was nominated for his second term and it’s the site where Martha Graham first performed “The Rite of Spring”. Visitors who arrive during the month of January can watch the Philadelphia Orchestra perform their anniversary concert, which has occurred each year for more than a century.

3 Tours and Activities to Experience Philadelphia Academy of Music

1260
Explore the best that Philadelphia has to offer on this hop-on hop-off tour of the city. Visit Philadelphia’s top attractions—like the Liberty Bell and Independence Hall—on a full loop. Select from a 1-, 2-, or 3-day pass. Board at any of the stops and get to know the city in custom fashion, with live commentary. A route map and courtesy shuttle from Center City hotels are included.
...  More
From
US$35.00
From
US$35.00
Learn More

9
Explore Philadelphia’s classic sights at your own pace with a 2-day pass for a hop-on, hop-off tour aboard an old fashioned, open-air trolley or a double decker bus with live narration from experienced guides. Design your own itinerary so you can take the time to visit the places that interest you, from historic American landmarks to world-class shopping destinations. Take a run up the ‘Rocky steps,’ eat a Philly cheesesteak, then browse the exhibits at the Philadelphia Art Museum. Courtesy shuttle available from city center, airport and City Line locations.
...  More
From
US$37.34
From
US$37.34
Learn More

5
Explore the best that Philadelphia has to offer on this hop-on hop-off tour of the city. Visit 27 of Philadelphia’s top attractions — like the Liberty Bell and Independence Hall — on a 1.5-hour loop. Select from a 1- or 2-day pass, then board at any of the 27 stops and get to know the city in custom fashion, with live on-board commentary. After dinner (own expense), enjoy the city as it’s illuminated for the evening on a ‘Philly by Night Tour.’ Pickup and drop-off from select hotels included.
...  More
From
US$59.74
From
US$59.74
Learn More

Things to do near Philadelphia