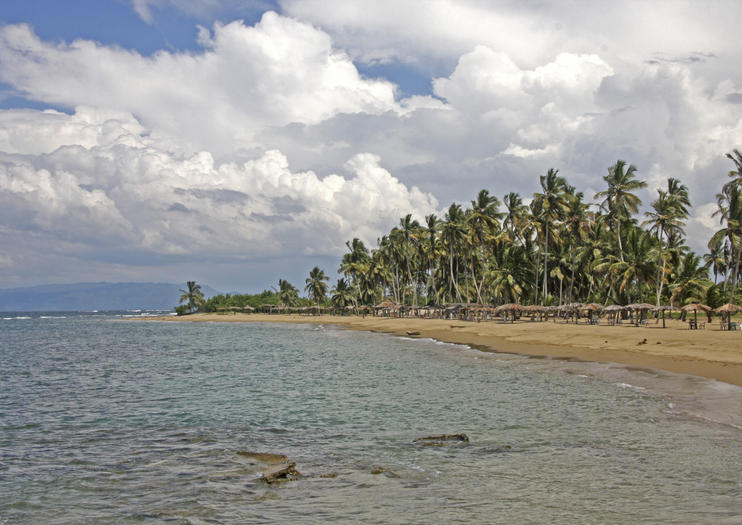 Amber Cove, opened in November 2015, may be newer than most cruise ports in the Caribbean, but its nearby attractions are far from rookie. Carnival Cruise Lines built the port, located on the Dominican Republic’s so-called Amber Coast and servicing Puerto Plata, for the use of their cruise ships along with other large-capacity liners that the the Carnival Corporation owns.
The Basics
Amber Cove is an ideal jumping-off point for exploring the Dominican Republic’s rife offerings of tropical adventures. Zipline courses through the Monkey Jungle, horseback rides through the countryside, and thrilling waterfall slides at Damajagua Waterfalls are among the more popular options, but Puerto Plata city tours and trips to Mundo King Creole Castle don’t disappoint. Though cruise guests don’t even have to leave Amber Cove to have a good time, as the port itself is full of amenities like bars, retail shops, and even a full-scale water park. And if you don’t want to take on outdoor challenges, you can just chill—made easy with the port’s waterfront cabanas.
Things to Know Before You Go
How to Get There
Amber Cove has a convenient transportation hub, with access to rental cars and taxi services that let you get around and explore with ease. Most shore excursions include pick-up from the cruise port for a hassle-free outing.
Port Information
Although Spanish is the official language of the Dominican Republic, most shore excursions are offered in English, as are other services catered to tourists. However, it doesn’t hurt to brush up on your Spanish. The currency for the Dominican Republic is the Dominican peso, but some businesses around Amber Cove accept American dollars.
Address: Puerto Plata, Dominican Republic
Read MoreShow Less

103
When your cruise ship docks in Amber Cove, use the time ashore in the Dominican Republic to experience the rain forest and its diverse ecosystem. With all transportation provided from the port, visit Damajagua Waterfalls and take a hike into the forest, then jump and slide down the falls under the supervision of your guide. On the way back to port, dance, socialize, and sip rum punch on the party bus.
...  More
From
US$62.10
US$69.00
US$6.90 savings
From
US$62.10
US$69.00
US$6.90 savings
Learn More

63
From historic attractions to scenic vista points, Puerto Plata has plenty to keep visitors entertained. See the best of the city in a short time frame on this Puerto Plata shore excursion, which includes 10 top area attractions such as the San Felipe Fortress and the historic Victorian district. A small-group limit keeps the tour more personal, while an open bar keeps you feeling like you’re on vacation.
...  More
From
US$67.15
US$79.00
US$11.85 savings
From
US$67.15
US$79.00
US$11.85 savings
Learn More

21
Take a break from the beach on this adventurous Dominican Republic eco-tour. Hike along a forest trail and across streams as your guide fills you in on the area’s local wildlife—including trees, birds, and other plants—all en route to a fabulous waterfall. Tour includes port pickup and drop-off from Puerto Plata and unlimited rum punch, making this an ideal Dominican Republic shore excursion.
...  More
From
US$57.60
US$64.00
US$6.40 savings
From
US$57.60
US$64.00
US$6.40 savings
Learn More

9
Get some relaxation with your exploration during this half-day, guided, historical tour of Puerto Plata that ends with lounging at a beachside resort. Learn about this vibrant city and then head to Golden Beach where a sunbed and cocktail are waiting for you. Take a swim in the ocean and order some food (own expense) before heading back to your departure point.
...  More
From
US$49.56
US$59.00
US$9.44 savings
From
US$49.56
US$59.00
US$9.44 savings
Learn More

Drive your own Dune Buggy through the sugar cane fields, up to the mountains and down to the beach. With all the instruction and equipment included, even beginners can learn how to drive a dune buggy. After being collected from the outside of Amber Cove Port, you will be taken to the tour starting point which is just 35 minutes away. Enjoy amazing scenery, muddy paths and a picturesque beach.
...  More
From
US$128.00
per group
From
US$128.00
per group
Learn More

1
Drive your own ATV through the small villages, following a meandering road to the beach. Make a stop at a cigar shack where you learn about cigars, sample local organic chocolate and coffee. With all the instruction and equipment included, even beginners can learn how to drive a ATV. This is a half day of fun for those looking for a tour to see the natural beauty of the Dominican Republic. Enjoy amazing scenery, muddy paths and a picturesque beach.
...  More
From
US$101.54
From
US$101.54
Learn More

6
Combine the adventure of an off-road all-terrain vehicle (ATV) tour with some relaxing time on the beach during this shore excursion from the Amber Cove Cruise Port. With cruise port pickup and drop-off, this tour is a convenient option that eliminates the need for haggling over taxi fare. Your ATV tour is fully guided and instructed, taking you through tucked-away villages to a natural pool. Then head to the Playa Dorada resort beach for some time to unwind.
...  More
From
US$79.62
US$88.47
US$8.85 savings
From
US$79.62
US$88.47
US$8.85 savings
Learn More

6
Find your inner equestrian during this half-day, guided horseback riding tour through the Dominican countryside. Meet your horse, receive instructions on how to ride and then set off at a leisurely pace to through fields, farms, and across streams. Pass by indigenous rock paintings and ascend to a lookout to see the scenery from above before visiting a ranch.
...  More
From
US$50.26
From
US$50.26
Learn More

From the port, enjoy a fully, narrated excursion through the historic center of Puerto Plata - in air-conditioned, comfort. Next, travel off the main roads on an open-air, safari truck! You will make stops near a typical house and in the countryside along the way to a spring-fed, natural river pool where you will have a swim. Once back at the ranch you will sample coffee and rum before re-boarding your air-conditioned bus or van for the short ride to famous, Playa Dorada Beach resort. Included in this best-of-both-worlds combo is a complimentary beach lounger, fresh-water showers, complimentary rum punch, bottled water and sodas. A full service bar and restaurant is on-site.
...  More
From
US$78.32
US$89.00
US$10.68 savings
From
US$78.32
US$89.00
US$10.68 savings
Learn More

Things to do near Puerto Plata