How to Spend 1 Day in Tromso 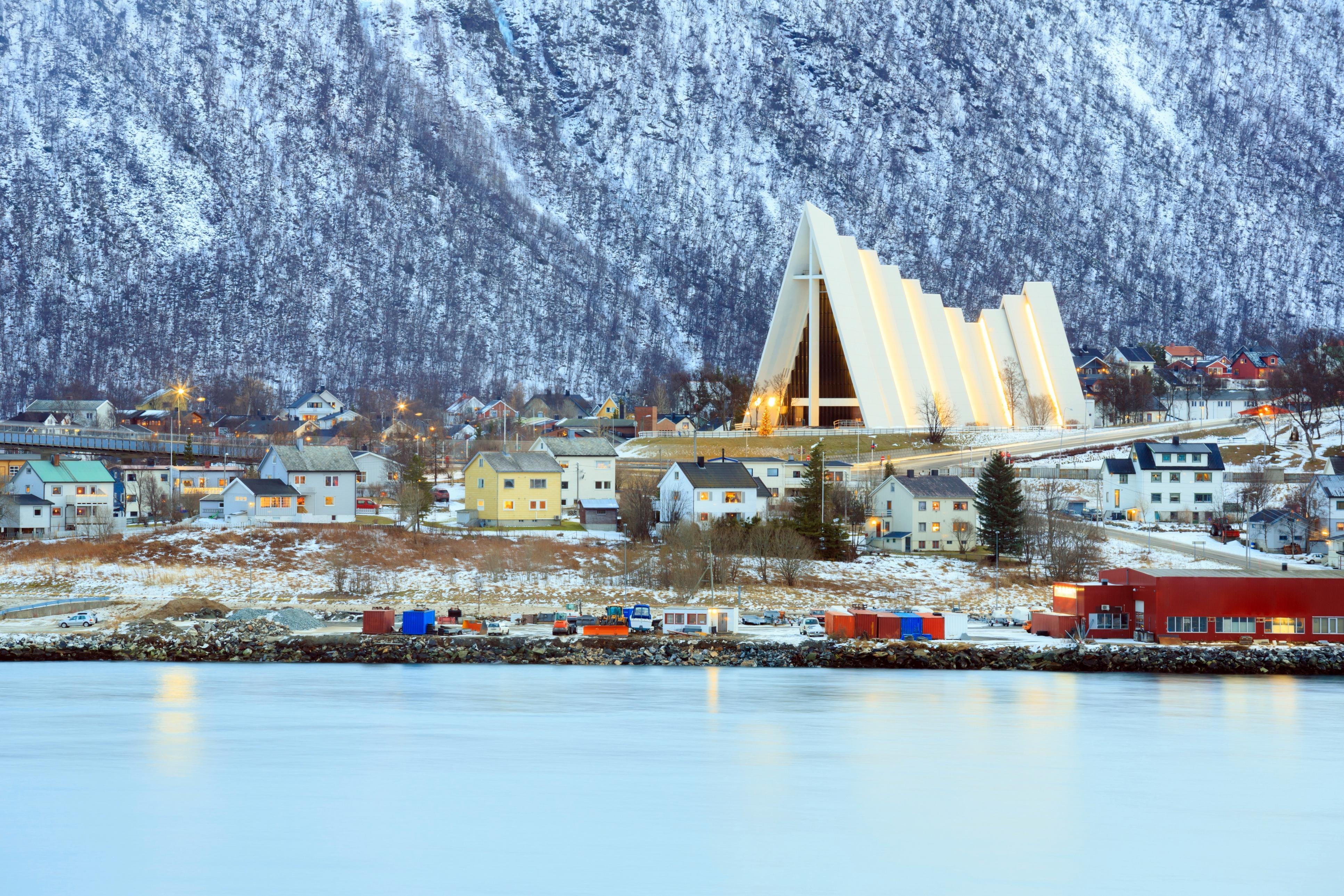 Norway’s Arctic gateway, Tromso is 250 miles (400 kilometers) above the Arctic Circle. Surrounded by icy fjords and snow-capped peaks, the small city is on Tromsoya island, connected to the mainland by a bridge. It draws adventurers year-round for whale-watching, aurora-viewing, and dog-sledding. Here’s how to spend one day in Tromso.

Morning: Take in the Sights

Begin your day in Tromso by getting acquainted with its most important sights. A guided walking tour usually showcases medieval settlements, monuments, and the striking Arctic Cathedral. At the Polar Museum, learn about the many explorers, sealers, and polar bear hunters who have passed through Tromso. Tours typically conclude at a local pub, an old-school explorers’ hangout with dozens of Norwegian microbrews are on tap. Alternatively, take in Tromso’s natural sights from the water on a fjord cruise aboard a classic wooden boat. Look out for seabirds,—including, in summer, puffins—dolphins, pilot whales, and more.

Spend a thrilling afternoon driving huskies across the snow-covered wilderness that surrounds Tromso. Tours typically depart from a husky farm and allow time to get acquainted with the dogs before you board your sled and zip across the icy tundra. Afterward, warm up with a provided hot drink and snack. Another option, for those who want to learn how to cross-country ski like a typical Norwegian, is to take an afternoon skiing lesson. In a short session, you can learn the basics of skiing, starting out on flat terrain and gradually progressing to small hills when you are ready for a challenge.

If you visit Tromso between November and March, you are in luck as this is prime northern lights season. Spotting the aurora by yourself can be tricky; instead, join a tour that's led by an experienced aurora hunter who knows the best viewing spots based on the weather. Your options include traveling by bus or boat. Some tours are specifically tailored to photographers, with experts on hand to assist with technical advice. Those visiting in summer can enjoy the midnight sun on board a catamaran that cruises through the Tromso fjords late in the evening when the sun is still shining.

6 Tours and Activities | All Tromso Tours

631
Set out from Tromso on a hunting tour of the Northern Lights. Join a small group and a guide in a fun quest to 'chase down' the Aurora Borealis, traversing the nearby countryside and even into Finland to catch a glimpse. After finding the right setting, gather around a campfire, warm up with some soup, and await the spectacular night light show. Your guide will also offer some tips for best capturing the Northern Lights in pics, and snap some that they'll share as souvenirs.
…More
From
US$206.23
From
US$206.23
Face masks required for travelers in public areas
Face masks required for guides in public areas
Social distancing enforced throughout experience
Learn More
Taking safety measures

147
Delight in the wintery wonderland of Norway on a 4.5-hour husky safari experience from Tromso. Combine stunning scenery with an adrenaline-fuelled adventure as you undertake a breathtaking journey across Breivikeidet. Head to a husky farm located in the snow-smothered wilderness of Tromso, and then climb aboard your sleigh for an exhilarating ride. After your fun-filled ride, revitalize with a hot drink and a sweet cake in a teepee-like tent before returning to the city.
…More
From
US$208.99
From
US$208.99

326
Chase the Aurora Borealis, aka, 'The Northern Lights,' through Norway's Arctic skies on this small-group adventure from Tromso. Head outside of the city, past stunning mountains and fjords to find the lights―sometimes traveling all the way to the Swedish and Finnish borders alongside guides ranging from professional tour guides to local aurora hunters. While sightings are never guaranteed exquisite natural scenery is always part of the excursion―as are a complimentary dinner, snacks, and beverages. Get hunting!
…More
From
US$134.61
From
US$134.61

34
Discover the important sites and most picturesque spots in the city of Tromsø on a 2.5-hour historical walking tour with a local guide. See traces of medieval settlement, and explore the vibrant marketplace and fisherman monument. Hear tales of explorers, sealers and polar bear hunters on a guided trip through the Polar Museum then visit the world’s northernmost cathedrals. Finish your tour at Tromsø’s most authentic pub, where dozens of Norwegian microbrews are on tap at an old-school polar hangout.
…More
From
US$33.93
From
US$33.93
Social distancing enforced throughout experience
Regularly sanitized high-traffic areas
Guides required to regularly wash hands
Learn More
Taking safety measures

45
If you’ve never skied before or haven’t mastered the sport yet, this cross country ski lesson for beginners in Tromso is for you. Get picked up from Tromso, and drive about five minutes to the skiing spot. Your guide gets you the equipment you need, and makes sure you feel comfortable in it. Then, you learn the basics of skiing, and start out on flat terrain. If you feel confident, you can gradually hit small hills to challenge yourself, too.
…More
From
US$119.58
From
US$119.58

101
Eager to experience the Northern Lights? Join this bus tour from Tromsø in search of the natural marvel. Venture into northern Norway’s countryside by comfortable minibus to seek out the dark skies most conducive to sightings. Visit different lookout locations; scan the skies, and make use of supplied tripods and the know-how of an expert guide to photograph the lights at their best. As you wait to spot the overhead spectacle, stay refreshed with hot chocolate, coffee and cake. Numbers are limited to 16 people for an intimate experience.
…More
From
US$164.88
From
US$164.88