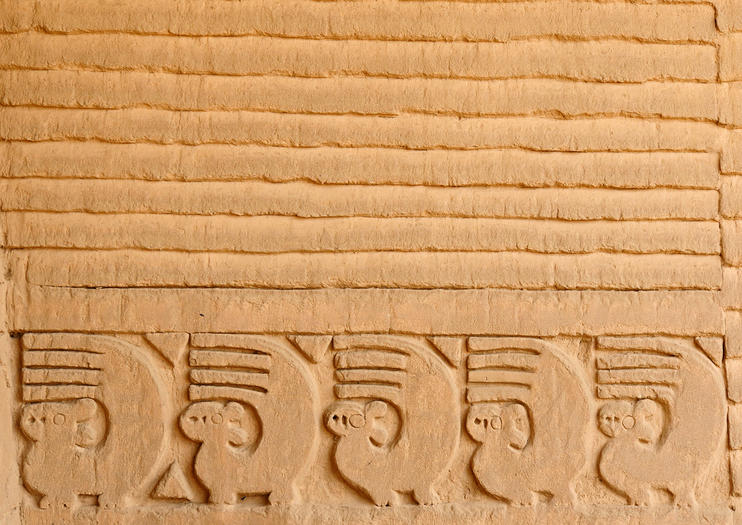 The ancient city of Chan Chan, in Peru’s Moche Valley, was once the largest city in the Americas. For nearly 600 years, this metropolis of adobe buildings was the seat of the Chimú Kingdom (1000–1471 AD) and home to around 60,000 people. Today, the ruins constitute one of the world’s most important archaeological sites.
The Basics
The UNESCO-designated Chan Chan site includes four main locations, which are spread out over 5,120 acres (2,072 hectares). Visit the ruins of Tschudi Palace, which are still decorated with aquatic-themed friezes. Next, explore the Chan Chan Site Museum, which holds an array of excavated ceramics and architectural models that show visitors what the city would have looked like in its heyday.
Slightly farther away, you’ll find Huaca Esmeralda and the Temple of the Dragon (Huaco el Dragon), which is also known as the Rainbow Temple (Huaca Arco Iris). These two smaller pyramidal temples also boast original friezes and reliefs, and the Temple of the Dragon offers astonishing restored rainbow-shaped friezes.
Things to Know Before You Go
How to Get There
Chan Chan is located about 3 miles (5 kilometers) from Trujillo. You can reach the site via taxi or take the Huanchaco bus (S/4) from Av. España in Trujillo. There are often taxis at the Chan Chan sites, but you may want to arrange for a driver to take you between the main locations as transportation is not always available. Many guided tours of the site include round-trip transportation.
When to Get There
Chan Chan is open daily all year round from mid-morning until early evening. Trujillo enjoys a subtropical desert climate, with a warm season (January–March), and a cooler season (June–November). The city hosts an International Spring Festival in late September, which is one of Peru’s largest and most popular festivals and includes horse shows, fashion shows, and dance contests.
The History of the Chimu Empire
The Chimú Empire reached its apex in the 15th century, shortly before falling to the Inca. At its height, Chan Chan was the largest adobe city in the world. The surrounding area was used for agriculture and boasted an extensive irrigation system. Many of the city’s adobe structures were destroyed, but evidence shows that the Chimú were master engineers and craftsmen and that many of the city’s buildings were decorated in gold and silver.
Address: Jr. Torre Tagle 178, Trujillo, Peru
Admission: Varies
Read MoreShow Less

9
Visit Trujillo’s most significant archeological site on a cultural full-day tour of the area’s most atmospheric and astounding ruins. Explore the sacred structures of the Temples of Moche; feast upon local specialties in the coastal town of Huanchaco; and discover South America’s biggest ancient city at the UNESCO World Heritage site of Chan Chan. Accompanied by a knowledgeable guide, enrich your historical knowledge of the region on this exciting archeological excursion.
...  More
From
US$91.80
Price varies by group size
From
US$91.80
Price varies by group size
Learn More

29
We provide the best Service as a Tour Operators with the benefit of a BACKPACKER budget. Because learning about other cultures shouldn't be expensive!!!
...  More
From
US$17.44
From
US$17.44
Learn More

1
Chan Chan is a complex of adobe and sand and was one of the largest known cities in the Americas. For nearly 600 years, the sprawling city was the seat of an Empire that extended for hundreds of miles, and its residents were masters of engineering techniques unknown to the rest of the world.
...  More
From
US$65.00
From
US$65.00
Learn More

Full day: Temple of the Moon and Sun & Chan Chan

The archaeological ruins around Trujillo are a must for visitors to northwest Peru, though limited signage at the sites can diminish the experience for independent travelers. Make the most of your time there on this guided tour, which includes visits to the Temples of the Sun and the Moon (Huacas del Sol y de la Luna) and Chan Chan, plus a guide to explain their historical significance.
...  More
From
US$85.00
From
US$85.00
Learn More

4
circuit made for lovers of history and archeology who wish to have a unique experience and enter routes not common to the public and be the lucky ones to access the best places and latest finds. In addition throughout the tour will be accompanied by official touristic interpreter guide heritage and conservation. Our circuit is designed by experts in archeology and passionate about guiding.
...  More
From
US$123.08
From
US$123.08
Learn More

3
Set out from Trujillo on a few-hour tour combining incredible archaeological sites with a trip to a popular beachside village. Your adventure begins with a visit to the Temple of the Dragon, known for its amazingly detailed friezes. Then spend some time exploring Chan Chan, the one-time capital of Peru's Chimú civilization. An expert guide provides details on the history and significance of this intriguing site along the way. Your final stop is Huanchaco, a coastal town known for its caballitos de totora, or fishing boats.
...  More
From
US$36.70
Price varies by group size
From
US$36.70
Price varies by group size
Learn More

5
After working for over two years with different Cruise Ship Lines providing tours, we decided to offer a customize experience that will fit from your arrival time to your departure time (specially made for Cruise Ship travelers) We are able to customize a group or private tour experience including all the main archeological sites accordingly to your available time in our Home town. Because learning about other cultures shouldn't be expensive!!!
...  More
From
US$61.54
From
US$61.54
Learn More

2
Private tour through the most enigmatic cultures of trujillo, visiting the huacas sun and moon, chan chan and huanchaco fishing village with totora rafts. The service is private in mobility with air conditioning and with corresponding insurance; In addition, all visits are with permanent assistance with a guide in English. The service includes pick up from the port, transfers and tickets to the attractions.
...  More
From
US$276.93
From
US$276.93
Learn More

Are you looking for reasons to escape to northern Peru? Then the beaches, architecture and archeological sites of Trujillo are the ideal plan to spend a memorable holiday with family, friends or your partner.  Known as the City of Eternal Spring, the capital of the La Libertad region is located 556 kilometers from Lima, so the trip is not very long
...  More
From
US$25.65
From
US$25.65
Learn More

We offer this tour with an English or French speaking tour guide for minimum 2 people. We offer the best of Trujillo: Huaca del Sol y La Luna, Dragon temple, Chan Chan and Huanchaco.
...  More
From
US$20.52
From
US$20.52
Learn More

You will visit Huaca de La Luna center of the Moche culture and Chan Chan capital city of the Chimu Kingdom.
...  More
From
US$61.54
From
US$61.54
Learn More

With this tour, you will have the oportunity of visit the best of Moche and Chimu culture and also you will enjoy the visit to Huanchaco beach
...  More
From
US$45.00
From
US$45.00
Learn More

Excursion for those who wish to have the best day of their life visiting pre-Inca places accompanied by an accredited guide and transportation for their tour. Learn about our culture, people and places of interest not attended by visitors. In this tour you can enjoy tranquility in each place and having enough time for each place, the times in each attraction are variable according to the interest of the tourist. Our excursion is for foreign tourists who love and feel passion for traveling as well as our guides when contacting you.
...  More
From
US$85.00
From
US$85.00
Learn More

You will meet a Moche artisan family, whose work maintains the traditions inherited from their ancestors. Then you get panoramic visit to the Huaca del Sol, you will explore the Huaca de la Luna, the one that most impresses with its conservation and study level. Follow your visit to the 'Huaca Dragon' or 'Huaca Arco Iris', belonging to the Chimu culture. It is a prominent religious monument and ceremonial and administrative centre, built with adobe and whose murals are decorated with friezes showing anthropomorphic figures and representing the rainbow. Continue your walk or through Huanchaco, one of Trujillo's most traditional beaches and famous for totora horses. There you will enjoy a delicious lunch with local flavour. Finally, you will arrive at Chan Chan; the impressive mud city declared a World Heritage Site by Unesco. Considered the capital of the Chimu culture.
...  More
From
US$500.00
From
US$500.00
Learn More

Do not miss the chance to discover impressive archaeological complexes in the north of Peru, with our Sun & Moon Huacas, Huaca Del Dragon, Chan Chan and Huanchaco Archeological Complex Day Tour from Trujillo. This tour will take you on a trip to the past to discover the secrets of the ancient cultures that once inhabited this area, and to enjoy a delicious lunch at Huanchaco beach, with beautiful ocean views.
...  More
From
US$120.00
From
US$120.00
Learn More

Things to do near Trujillo