Private Tour of Ephesus From Port of Kusadasi with Private Guide 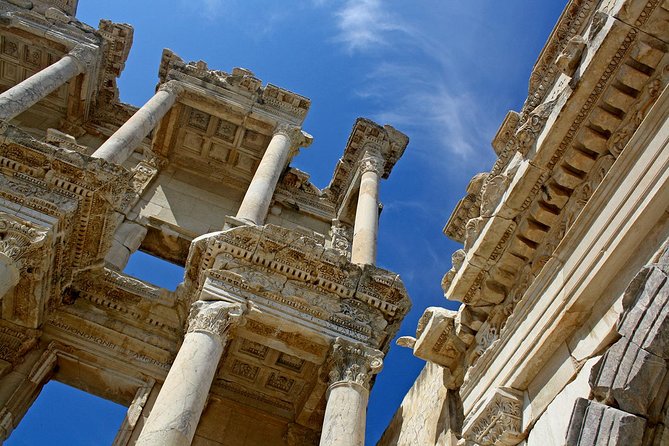 The ancient city of Ephesus is a UNESCO World Heritage Site with Roman theaters, baths, and temples, but finding your way to the most important landmarks can be overwhelming. Visit the archeological site with a private guide on a 3.5-hour tour from Kusadasi port for your group of up to 12 people, including round-trip transfer by air-conditioned vehicle.

Please contact your local supplier to reconfirm your tour time

Begin with pickup at Kusadasi Port, and travel to the Ephesus archeological site in a private car, passing the remains of Byzantine and Roman archways along the way. Purchase admissions tickets at the gate, then follow a guide through the streets of the city at your own pace, with plenty of time to see the things that interest you most.

Visit the Fountains of Trajan and the Great Theater, where 25,000 ancient spectators could gather for plays, speeches, and gladiatorial combat. Take in the Library of Celsus, the third-largest library in the ancient world, see the Odeon, and follow in the footsteps of Mark Antony and Cleopatra on the Arcadian Way.

Step back into Roman public life in the Agora and the Scholastic Baths, while your guide shares stories about the historic characters—from Alexander the Great to the Virgin Mary—believed to have visited Ephesus at its height. Make a final stop at the Temple of Artemis: one of the Seven Wonders of the Ancient World, the only remains of the once-magnificent temple are chipped foundations and worn marble columns. Take some time to visit nearby shops and streets on your own, then make the return trip to Kusadasi Port, where this tour concludes.
Read MoreShow Less
Itinerary
Pass By:
Kusadasi Port Ephesus Tours- Private Tours
... MoreLess
Admission Ticket Free

Day Trips & ExcursionsKusadasiCategory
Lowest Price Guarantee
We guarantee the lowest price on all 200,000+ experiences we sell. If you find the same product cheaper within three days of booking or while you're in your destination, we'll refund the difference.
It's Easy To Do