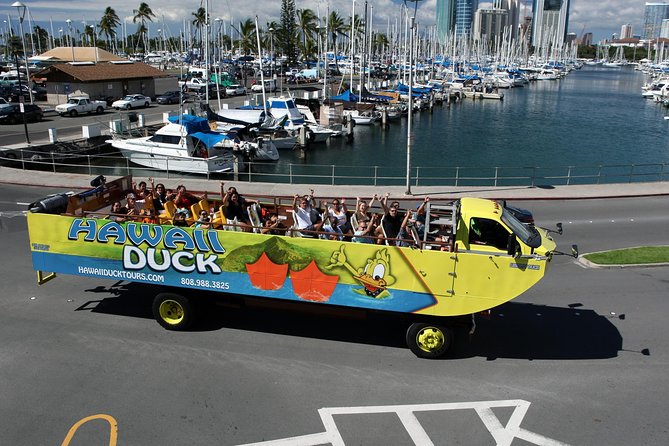 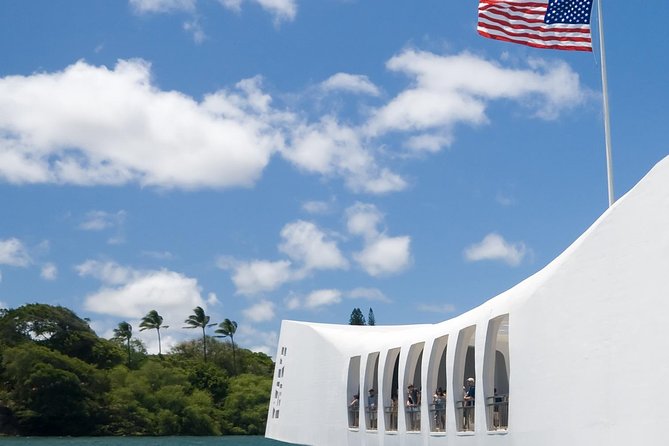 When touring Oahu’s historical sights, why not combine the history lessons with a little bit of fun? On this duck tour Hawaii, Honolulu Duck Tour, cruise past Iolani Palace on an open-air, amphibious duck boat, and you’ll also pass the famous statue of King Kamehameha. Since your car can also double as a boat, splash your vehicle down in the water for a cruise across Honolulu Harbor, and finish the 5.5 hour tour by exploring memorials at Pearl Harbor.

Your Honolulu Duck Tour begins in Waikiki in front of the Ilijkai Hotel, where you’ll board the open-air, amphibious vehicle for a cruise through Honolulu’s streets.

From the comfort of this former military vehicle, you’ll make your way past Hawaii’s largest shopping mall — Ala Moana Center — before passing the commercial fishing fleet that’s docked at Kewalo Basi. Soon, you’ll arrive at the front of Iolani Palace, where Hawaiian monarchs like Queen Liliuokalani once ruled the Kingdom of Hawaii. Today it’s America’s only royal palace, and was the site of the highly controversial overthrow that’s still contested to this day. As your expert guide explains the history, you’ll make your way to the nearby statue of King Kamehameha I, where you can walk around and take some photos with Hawaii’s most powerful monarch.

After passing the streets of Chinatown, you’ll splash in the water at Keehi Lagoon and cruise across Honolulu Harbor, where views of Sand Island, Waikiki, and Diamond Head stretch out before you.

Finally, upon reaching Pearl Harbor’s Visitor Center, staff from the park will direct you towards the historical attraction of your choice, whether it’s the Arizona Memorial, the USS Missouri, or the Pacific Aviation Museum (please choose option upon making booking.) Food is available for purchase on site, and after two hours exploring the sights at Pearl Harbor and tales of war and attack, the Honolulu Duck Tour concludes with a comfortable ride back to Waikiki.

Choose from one of the following tours for the Pearl Harbor portion of your duck tour:

USS Arizona Memorial
The USS Arizona Memorial is a national memorial that consists of a long building spanning the mid-portion of the sunken battleship USS Arizona, which one can see in the clear waters below. The memorial includes the Shrine Room, inscribed with the names of the 1,777 crew members who lost their lives during the attack on Pearl Harbor.
The tour takes 75 minutes, which includes a 25-minute documentary film and a boat trip out to the memorial.

4.0
9 Reviews
5 stars
4 stars
3 stars
2 stars
1 star
Reviews by Viator travelers
A good fun day out combined with the...
Maxljones
, Sep 2016
A good fun day out combined with the Pearl Harbour experience, our tour guide had so much information to share with us a recommended trip
... MoreLess
It is a combination of new experience...
JIANQING L
, Feb 2016
It is a combination of new experience and informative tour. The sea part is too short. The response from online help centre is not proactive and quick enough to answer my email. The rest is fine.
... MoreLess
Great Tour, Great Tour Guide, Great...
Mike C
, Sep 2015
Great Tour, Great Tour Guide, Great Day, and Pear Harbour was an eye opening Cheers Duck Tour
... MoreLess
Really good tour as 2 trips in one...
D N
, Sep 2015
Really good tour as 2 trips in one, Arizona very moving
... MoreLess
Enjoyed the duck tour, guide was good...
Alan C
, Jun 2015
Enjoyed the duck tour, guide was good. Liked the harbour trip, but found it frustrating that Pearl Harbour won't let you take even a small bag inside (not your fault I know but at least the guide warned us in advance).
... MoreLess
Definitely a must on Oahu. They pick...
Mike M
, Mar 2015
Definitely a must on Oahu. They pick you up and you sit back and enjoy it all. Through downtown and out into the harbor, with history being relayed. Staff was awesome. We also went on to to do Pearl Harbor which our guide from the duck tour handled everything, from the shuttle and the audio. We had never done a duck tour but always wanted to and this tour did not disappoint. You more than get your money's worth!
... MoreLess
Started off with being picked up from...
kayleen.walker
, Jan 2015
Started off with being picked up from pick up point 30 minutes late, no apology when they did arrive - but from then on all good, tour guide was funny and knowledgeable, Pearl Harbour definitely worth doing
... MoreLess
Our tour guide, Halem, was delightful...
Saundra W
, Nov 2014
Our tour guide, Halem, was delightful. He had an excellent knowledge of the area and informed us of many historical and current events. To go from the street into the water was quite an experience. We really enjoyed this Tour.
... MoreLess
The downtown portion of the tour was...
Deborah M
, Sep 2014
The downtown portion of the tour was amazing! Andy ( history expert) was awesome and knew an extensive amount of knowledge about everything. I felt like the water portion of the tour could have been longer and more useful.
... MoreLess
Reserve Now & Pay Later
We'll reserve your spot today, and you can cancel up to two days before your experience without making a payment. Secure your spot with ease, stay flexible, and never miss out.
How it works
Find your experience
Choose the experience you want knowing you can secure your spot without being locked in.
Make a reservation
Reserve now and pay later to secure your spot, commitment-free.
Choose when to pay
Come back to pay once your plans are set, or let auto-pay kick in two days before your experience.
Enjoy your experience
Now you're all set! Have a great time.
Frequently Asked Questions  | Terms & Conditions
Reserve Now & Pay Later
Secure your must-do activities without being locked in
Learn More