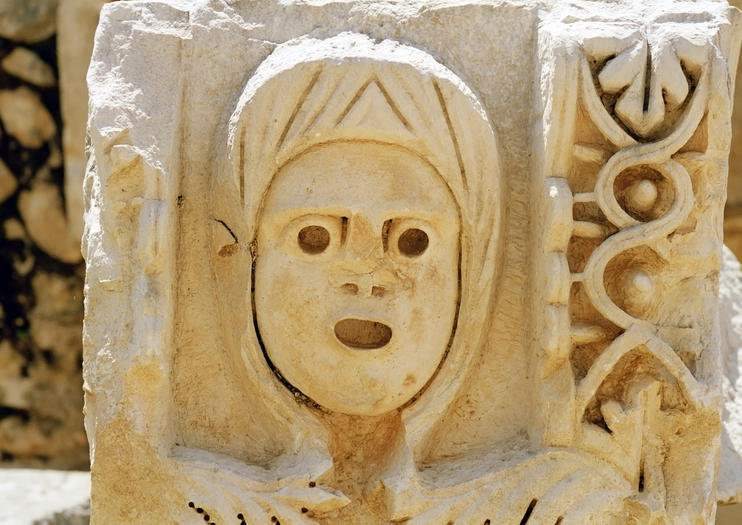 Born out of an attempt to prevent the country’s archaeological treasures from being plundered after World War I, the Antalya Museum (Antalya Müzesi) first opened in 1922. Exhibiting over 12,000 artifacts relating to the history of Anatolia’s Mediterranean and Pamphylia regions, it’s one of the largest and most important museums in Turkey, and is sometimes called the Antalya Archaeological Museum.
The Basics
The Antalya Museum is a popular inclusion on sightseeing tours of the city, often in combination with a walking tour of the Old Town (Kaleici) and marina. Inside, visitors can explore the 13 galleries, which include prehistoric artifacts, pottery, mosaics, and various statues, as well as sarcophagi, coins, jewelry, and ethnographic items. The museum also has an open-air sculpture gallery and a garden.
For travelers planning to visit nearby ancient cities such as Side, Perge, and Termessos, a tour of the museum can offer greater insight into the region’s long history, with a number of excavated items on display.

How to Get There
The Antalya Museum is located about a mile (1.6 kilometers) west of central Antalya along Konyaaltı Caddesi. Ride the tram from the Old Town—the final stop is just outside the museum—or catch a taxi, a 10-minute journey from the center.

When to Get There
The Antalya Museum is open daily except Mondays, although opening times vary slightly throughout the year. Opt for a morning visit, then head to nearby Konyaaltı Beach for lunch and spend the rest of the afternoon relaxing on the sand.
Highlights of the Antalya Museum
The museum collection features excavated finds from some of Anatolia’s most important archaeological sites, including the Karain Cave, Perge, and Pisidian Antioch. Highlights include a reconstructed Bronze Age urn from Elmalı, a pantheon and numerous friezes from Perge, a collection of ancient Greek and medieval coins, and an impressive collection of sarcophagi, including a rare, medallion-encrusted Nike sarcophagus. One of the most recent additions is a collection of bones believed to be those of Saint Nicholas, found beneath the Church of St. Nicholas in Demre in 2017.
Address: Konyaalti Cad. No:88, Antalya 07050, Turkey
Admission: Varies
Read MoreShow Less

168
Make easy work of Antalya’s steep cobblestone lanes and labyrinth bazaars by whizzing around the sights on an easy-to-ride electric bike. This small-group bike tour is limited to 10 people and is ideal for first-time visitors or those wanting to venture off-the-beaten-track. Pedal your way around the Old Town of Kaleiçi, past landmarks like Hadrian’s Gate and the Fluted Minaret, and cruise through the scenic Atatürk Park. Enjoy views of the Lower Düden Waterfalls and Konyaaltı Beach, then stop for a snack overlooking the lively marina.
…More
From
US$59.00
From
US$59.00
Face masks provided for travelers
Hand sanitizer available to travelers and staff
Social distancing enforced throughout experience
Learn More
Taking safety measures

1
Take in the best bits of Antalya on this 4-hour sightseeing tour and enjoy the undivided attention of your private guide. Explore the cobblestone streets of the Old Town, with its colorful marina; stop to snap photos of the landmark Hadrian’s Gate and Clock Tower; then browse the handicrafts shops for unique souvenirs. Finish with a visit to the fascinating Antalya Archaeological Museum, one of Turkey’s most renowned museums.
…More
From
US$175.68
Price varies by group size
From
US$175.68
Price varies by group size
Face masks required for travelers in public areas
Face masks required for guides in public areas
Face masks provided for travelers
Learn More
Taking safety measures

Our staff are extremely professional. It is our priority to always consider your safety and comfort in our services. We give satisfaction guarantee in Antalya tour. In such a city, you will see the difference with this package tour for our company.
…More
From
US$250.00
From
US$250.00

1
- A Local Professional Tourist Guide will show you around the ancient sites and the museum - The order of locations can be modified according to request or needs - You will not be taken to shops or have to pay commissions since you will get the service that you expect, that you pay for - This service is suitable for people who seek reliable information and interpretation about sights, heritage, sites in the area. All information given on the tour are given with references
…More
From
US$174.69
per group
From
US$174.69
per group

Your day will begin with a private guide and driver picking you up from your hotel. The tour guide will escort you first to the Antalya Archeology Museum. At the museum you will be transported back in time as you discover the rich history of Turkey and Antalya. Your second destination will be the picturesque and stunning Duden Waterfall. There you will have an opportunity to soak in the views of the Antalya coastline and green park surrounding the falls. Next your guide will transport you to Antalya’s Old City center. There you will be given a walking tour of the historical district, Kaleici, with opportunities for shopping and sightseeing. Your tour will conclude with your guide returning you to your hotel at around 17:00. Small Group, 15 people max Well thought out enjoyable tour route and pace Educated English Speaking Guide Shopping stops only if requested Book and pay online No hidden costs
…More
From
US$60.00
From
US$60.00

3
Explore Antalya on 2 wheels with great fun! We will pick you up from your hotel at 09:30 to discover Antalya. We ride through the greens in company with the breathtaking view of sea cliffs and parks. When we arrive to the Old Town, it will be a great joy to ride through the narrow streets and inclined paths of the historical marina. The wall stoned wooden houses of Old Town as well as the city walls, Madrasahs, Turkish Baths, Towers and Mosques that challenge the time will take you to a time travel. After having enjoyed traditional Turkish pancake (gözleme) and tea in this historical place, we will continue our tour with world famous Konyaaltı Beach, Beach Park, Cultural Center and Aquarium. We will drop you off at your hotel at the end of our tour during which you will have the opportunity to see a lot of attractions in a very short time. Let the fun begin!
…More
From
US$58.94
From
US$58.94
Face masks provided for travelers
Hand sanitizer available to travelers and staff
Social distancing enforced throughout experience
Learn More
Taking safety measures