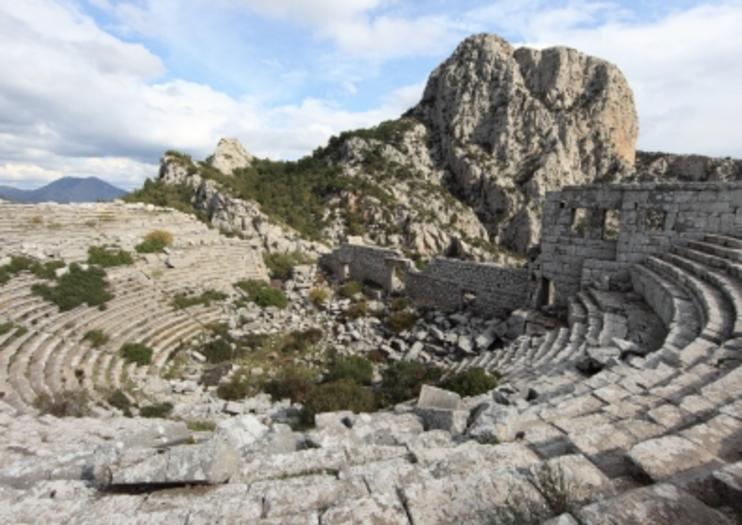 Dramatically situated high in the Taurus Mountains and part of Gulluk Dagi Termessos National Park, the ancient city of Termessos is as notable for its impressive location as for its remarkably preserved ruins. The star attraction is the 4,200-seat theater, built right on the cliffside and affording stunning views over the mountains below.

The Basics
Exploring Termessos is only possible on foot, and it’s a steep climb, especially to reach the higher ruins. Along with the theater, major sights in the upper part of the city include the Agora, the Odeon-Bouleuterion, the Hereon (monumental tomb), the Cistern with Five Partitions, the Colonnaded Street, and the Corinth Temple. Visiting with a guide is recommended as most of the ruins are not signposted and some can be tricky to find. Day tours run from Antalya and often combine a tour of Termessos with other regional attractions such as the Duden Waterfalls.

How to Get There
Termessos lies around 22 miles (35 kilometers) northwest of Antalya, about a 40-minute drive. Buses run from Antalya to the start of the national park, from which it’s possible to take a taxi to the site. The easiest way to arrive is with your own transport or as part of a tour.

When to Get There
The park is open daily throughout the year, but make sure you check closing times and leave yourself at least two hours to explore—the ruins are spread out over a large area. The size of the site means crowds aren’t normally a problem even in peak season, but summer travelers should time their visit to avoid the hottest part of the day.

Ancient Termessos
The ancient city of Termessos was originally a Pisidian city and dates back to 333 BC. A strategic stronghold along the trade route from the Mediterranean to the Aegean, Termessos was one of few cities not conquered by Alexander the Great, protected from invading armies by its steep cliffs and gorges. The city was ultimately abandoned, probably due to earthquake damage in AD 243, and excavations are ongoing.
Address: Gulluk Dagi Termessos National Park, Antalya 07800, Turkey
Read MoreShow Less

4 Tours and Activities to Experience Termessos

Visit the Duden Waterfalls and the ancient city of Termessos with your own private guide on a full-day tour from Antalya. Take in the region's natural beauty and ancient history as you head into the Taurus Mountains. Includes lunch, private guide and vehicle, entrance fees, and hotel or cruise port pickup and drop-off.
…More
From
US$497.74
From
US$497.74
Face masks required for travelers in public areas
Face masks required for guides in public areas
Hand sanitizer available to travelers and staff
Learn More
Taking safety measures

Termessos and Via Sebaste Tour from Antalya

Your day will begin in the morning with a private guide and driver picking you up from your hotel. You will first visit the ancient city of Termesos on the top of the Taurus Mountains. If time allows you will also have a chance to visit Karain Cave. Lunch will be provided at a local restaurant. The tour also includes a walking tour of a section of the historical and ancient Via Sebaste in the afternoon. The tour will conclude with your guide returning you to your hotel.
…More
From
US$60.00
From
US$60.00
Face masks required for guides in public areas
Hand sanitizer available to travelers and staff
Regularly sanitized high-traffic areas
Learn More
Taking safety measures

FROM : ANTALYA AT : 07:30 KUNDU RETURN : 17:00 HOTEL – Departure from hotel – Evdirhan Caravanserai – Termessos Ancient Site, Gymnasium Ancient Theatre, Bouleuterion / Odeion, Temples, Cisterns, Rock Tombs – Lunch – Düden Waterfall – Break for shopping – Back to Antalya and transfer to the hotel.
…More
From
US$156.78
From
US$156.78