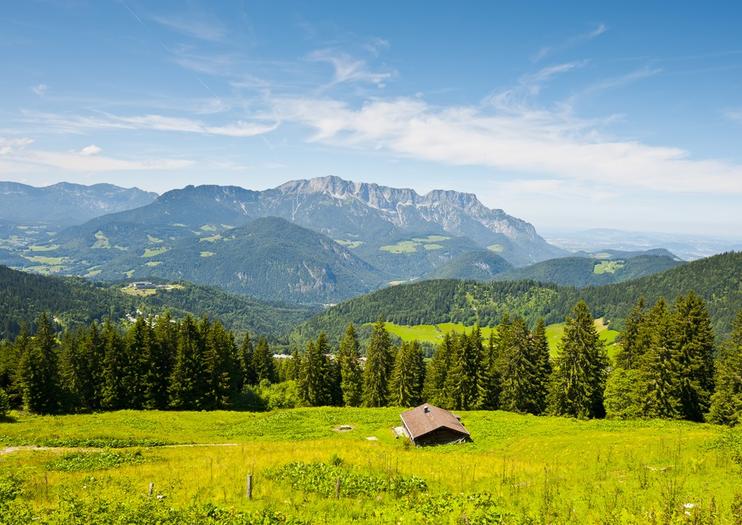 Stretching along the Austrian border, the Bavarian Alps offer some of southern Germany’s most spectacular scenery. Think dizzying mountain roads circling vast lakes, forested peaks capped with fairy-tale castles, and picturesque medieval villages tucked away in alpine valleys.
The Basics
Most visitors explore the Bavarian Alps from Munich or on a day tour from Salzburg, Austria. Popular destinations include King Ludwig II’s magnificent Neuschwanstein Castle; Hitler’s legendary Eagle’s Nest retreat at Berchtesgaden; Oberammergau, where the world-renowned Passion Play is held each decade; and lively Füssen, at the start of the Romantic Road tourist trail. Day trips along the German Alpine Road are also popular, running from Lake Constance to Berchtesgaden and affording incredible mountain views.
Things to Know Before You Go
How to Get There
The easiest way to explore the Bavarian Alps is by private transport or by joining a guided tour, but trains and buses also connect Munich with many alpine resort towns, including Garmisch-Partenkirchen, Bad Tölz, and Berchtesgaden. The closest international airports are in Munich and Salzburg.
When to Get There
Summer is the most popular time to visit the Bavarian Alps, and towns like Füssen, Oberammergau, and Berchtesgaden are busiest during July and August—make an early start if you want to avoid the crowds. For hikers, spring and autumn offer the most pleasant weather, while the ski season typically runs December through March. In November and January, tours and accommodation are often cheaper, but many attractions, guesthouses, and restaurants may be closed.
Things to Do in the Bavarian Mountains
Whether you have a day or a week to explore, there are plenty of things to do in the mountains. Take the train or cable car to panoramic views at the top of Zugspitze, Germany’s highest mountain at 9,718 feet (2,962 meters); visit hugely popular Garmisch-Partenkirchen, Germany’s highest ski resort; learn the traditional art of cheese making in the Allgäu region; or tackle one of the Alps’ many hiking trails.
Address: Bavarian Alps, Bavaria, Germany
Read MoreShow Less

Things to do near Bavaria