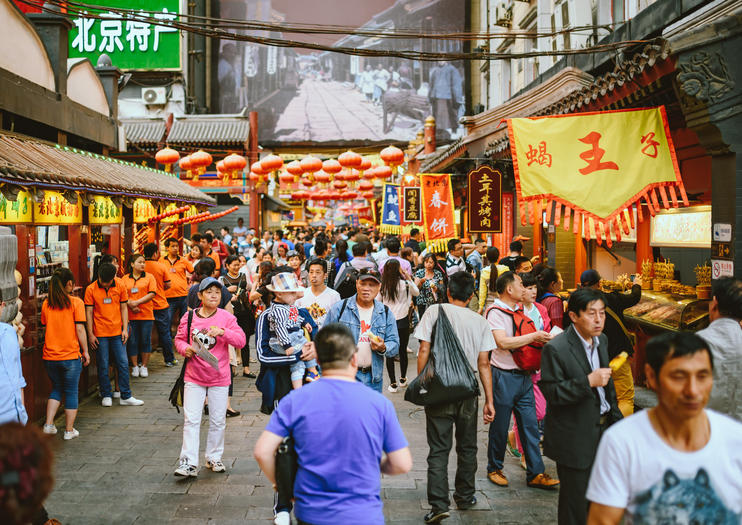 Follow the sizzle of wok frying and the shouts of vendors to this quintessential after-dark hotspot in Beijing. The pedestrianized Donghuamen Night Market teems with locals and tourists who come for the adventurous street food, including skewers of scorpion, snake, starfish, or lamb testicles (as well as tamer options).
The Basics
Chinese and international visitors alike flock to Donghuamen Night Market for one reason: to eat. Many of the Chinese street food offerings come skewered and fried, making them easy to eat as you wander the length of Wangfujing Street. Those with an adventurous appetite will have plenty to choose from, but even more timid eaters can opt for Chinese stir-fried noodles, skewers of fresh fruit (sometimes dipped in liquid sugar), or a custard bun.
Things to Know Before You Go
How to Get There
Donghuamen Night Market is located north of Donganmen Street in Beijing’s Dongcheng District. Several public bus routes stop nearby, or you can take the subway to the Wanfujing stop.
When to Get There
While some vendors serve food earlier in the day, the bulk of the food stalls set up shop between 6pm and 9pm daily.
Other Snack Streets in Beijing
No matter the hour, there’s always something to eat in Beijing. While Donghuamen is the most famous of the city’s snack streets, other options include the 24-hour restaurants of Guijie Street (known for spicy lobster), Guanganmen Snack Street (known for Sichuan specialities), and Niu Jie Muslim Snack Street (known for ethnic minority cuisine).
Address: Wangfujing Street, Beijing, China
Admission: Free
Read MoreShow Less

Things to do near Beijing